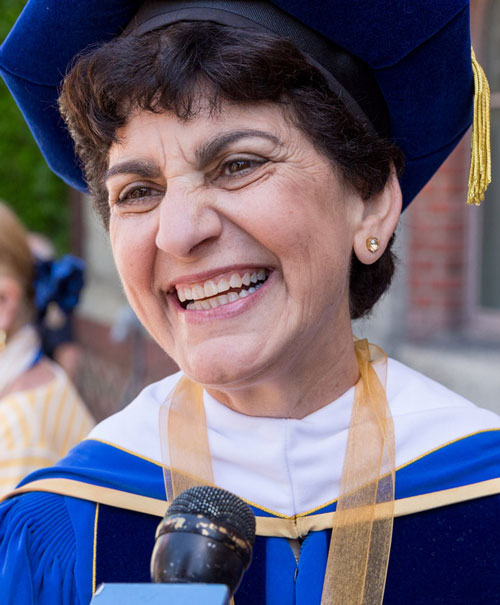 Dr. Mary A. Papazian has the pedigree to lead a great university. A native of Los Angeles, Dr. Papazian had nearly 30 years of teaching and academic administrative experience when she became San Jose State University’s 30th president and the first Armenian American female president of a university on July 1, 2016. That same year she joined the Joint Venture Silicon Valley Board of Directors.

What is apparent after spending time with Dr. Papazian is that San Jose State and the surrounding community means a great deal to her. She is committed to delivering the best possible education to her diverse student population, ensuring that the university has a seat at the table as decisions are made on urban growth and development, and giving back to the community. How does she gauge San Jose State’s role? Google is building a San Jose campus of 20,000 employees; the university, she notes, has a campus of 40,000 already thriving in the city center.

Born Mary Ellen Arshagouni in Santa Monica in 1959 and raised in L.A.’s San Fernando Valley, this “Valley Girl” was the only girl in her family among three brothers. An avid basketball player in high school, she gave up piano for the sport. “I wasn’t a great player but I was decent and this was the era of John Wooden at UCLA. I didn't play basketball with the girls. I played basketball with the boys. I think that shaped me more than I realized at the time,” says Dr. Papazian. “Athletics and Girl Scouts help teach confidence, resilience, and entrepreneurship.”

Marie Tuite, Intercollegiate Athletics Director at San Jose State sees how those lessons impacted Papazian. "Her background is embedded in the notion that public education is essential to our common good and access to this education is intended for humankind. She understands and supports the value of Athletics. She has the uncanny ability to inspire constituencies. She's simply the best!"

Dr. Papazian earned her bachelor’s, master’s and Ph.D. in English from the University of California, Los Angeles (UCLA), where her parents also attended. “I knew that since I was five, I was going to UCLA to study English because that's what my mother did. I really admired my mother,” she said. She loves to read and is currently reading about the innovation economy and the new geography of jobs. 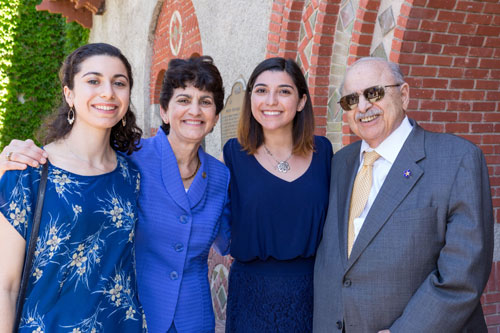 In 1991 Dr. Papazian married Dr. Dennis Papazian, a professor of Russian history. Together they have two adult daughters, Ani (25) and Marie (20). Ani is in medical school at Tufts University in Boston and Marie is a sophomore at Barnard College in New York City as an English and creative writing major and an East Asian studies minor.

Drs. Mary and Dennis Papazian are actively involved in Armenian historical and cultural efforts. Dr. Dennis Papazian is the Founding Director of the University of Michigan, Dearborn's Armenian Research Center and is one of the founders of the Armenian Assembly, an important Armenian advocacy organization based in Washington, D.C. 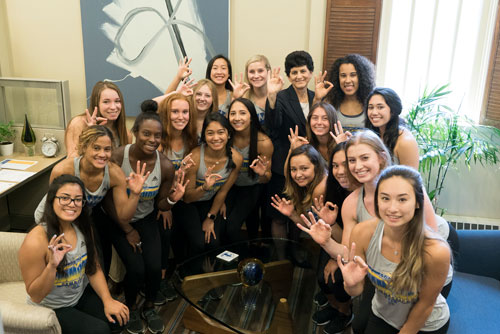 In the world of academic leadership, women are still a minority. According to the 2017 American College President Survey, women comprised only 30% of college presidents nationally as reported for 2016. “It's actually closer to 50% of community college presidents and maybe 17% of four-year universities and above, so it's 30% total but not across the board,” says Dr. Papazian. Dr. Papazian believes that there is unconscious bias not only toward women, but also toward under-represented minorities. She believes that more women are needed in boardrooms and on university boards because, ultimately, it's the board that hires presidents.

She has found a good place to make her mark. Established in 1857, San Jose State is the oldest public university on the west coast and one of the most ethnically diverse in the nation. It is also the only public university in Silicon Valley. With a total enrollment of nearly 35,000 students, a staff of 3300, and an annual operating budget of $373 million, San Jose State is consistently listed as one of the leading suppliers of alumni to Silicon Valley tech firms.

According to a new survey from CollegeVine, San Jose State is the most underrated school in America. Dr. Papazian readily draws comparisons between the university and the City of San Jose. She notes that when a survey a few years ago asked respondents to name the top-100 cities in America, by size, a third of respondents didn't even put San Jose in the top 100 ¾ yet it's the 10th largest city in the US. “Our students do well and nobody knows it. But the truth is the City of San Jose is in the same boat.”

As an articulate and outspoken advocate for both the university and the city, Dr. Papazian believes the city must transform itself through innovation while embracing a high quality of life that is equitable and inclusive. “And it can't happen without San Jose State at the table,” she insists. “Google might come in, but Google might leave. We're not leaving and the city’s not leaving. We have to be seen as a major anchor in the heart of the city.”

She wants to ensure that the university at large is engaged in critical conversations and decision-making in the downtown corridor. That has not always been the case, Dr. Papazian says. “If I'm designing a transportation system and I have an entity that has 40,000 people three blocks away, I think I might want to talk to them,” says Dr. Papazian. She does not believe that transportation leaders are deliberately ignoring San Jose State and places some of the responsibility on the university for not being as engaged as possible. But that, she says, is changing.

“State of the Valley is always one of my favorite events. I especially pay attention to growth in the healthcare sector because we're refocusing one of our colleges on health and human sciences,”

Dr. Papazian was named to the Joint Venture board of directors in 2016 and immediately appreciated the organization’s approach to bringing leaders together from a broad spectrum of economic sectors to resolve community issues. Dr. Papazian especially values the Silicon Valley Index and believes the “honesty” of the data enables leaders think and to act on strategies to bring about effective change. “State of the Valley is always one of my favorite events. I especially pay attention to growth in the healthcare sector because we're refocusing one of our colleges on health and human sciences,” says Dr. Papazian.

At her State of the University presentation in April, Dr. Papazian released Transformation 2030, a strategic plan for the university and collective vision for the next 10 years.

Transformation 2030, according to Dr. Papazian, is meant to transform individual students’ lives who attend San Jose State with an aspiration to change their life trajectory. As the only public university in Silicon Valley, San Jose State has an obligation and a responsibility to represent the diverse students whom it serves, she says.

Jaye Bailey, Vice President for Organizational Development at San Jose State, says Papazian’s commitment to her ideals is strong. “Mary brings her endless passion for quality public education to her position as SJSU president. She knows deeply and personally the challenges our students face when trying to achieve academic success while juggling financial and other concerns. She is also very proud to be an Armenian American and that heritage helps her to see the world through a lens of equity, justice and inclusion.”

Dr. Papazian wants San Jose State to be seen nationally and beyond as an institution that is committed to social mobility and a steward of the American Dream. “I want our graduates to go out and be infused with values of equity, inclusion and social justice,” says Dr. Papazian. “I think our students will bring a different voice to the table and if we can accomplish that then I think we will have done something meaningful. Our students want to have impact. They understand that there are serious existential problems to solve. There's going to be a profound reckoning and if we do our jobs right, they will be up to the task.”