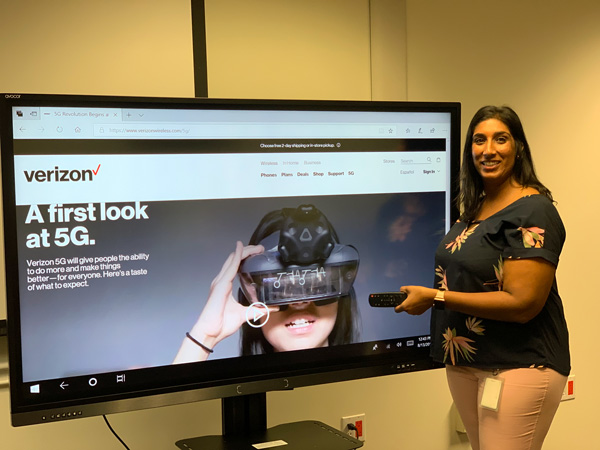 Will you be first in line for an autonomous vehicle? Once fifth-generation wireless technology is in place, self-driving cars are just one 5G-powered innovation that will shake up how we live and work. Experts say 5G is ushering in the Fourth Industrial Revolution.

Just as 4G enabled services like ridesharing and livestreaming, speedier, higher-capacity 5G will bring services we haven't yet imagined, with huge implications for robots, health devices, retail and transportation. But that could take years.

If Radha Sharma gets her way it may be sooner than later. Sharma is Senior Manager of Municipal Engagement with Verizon Wireless and serves on the steering committee for Joint Venture’s Wireless Communications Initiative. At Verizon, Sharma works closely with local governments and community groups in order to align network goals and streamline ongoing 4G and future 5G deployments.

“The most interesting part of my job is to explain how our technology works and the importance of why we need this infrastructure in place,” she says. “People have a tendency to fear what they don't understand.”

At 37, Sharma is married to an engineer and has two little boys, ages seven and two. Most of her recreational time is devoted to her sons’ swimming, gymnastics, and basketball lessons. She enjoys hiking and yoga when her busy schedule and long commute from Fremont to Walnut Creek permits.

Sharma and her immediate family originated on four different continents. Born in London, Sharma came to the United States at two with her parents who are from India and Kenya. Her younger brother was born in the U.S.

Sharma deeply admires her father, a native of Bombay, India. He came to Fremont via London and worked in procurement at Intel for 25 years. “He is my hero because that's how I became interested in business and negotiating agreements,” Sharma says. “He has a brother who lives in Connecticut where he was supposed to end up. But then he met my mom who’s from Kenya and then they got married. But he said, ‘I don't want to live in Connecticut. I'm going to go to California.’ He didn't know a soul here. That's very courageous, really,” Sharma said with a smile.

Raised in Fremont, Sharma attended San Jose State University where she majored in political science before obtaining a Juris Doctor at Golden Gate University. When she interned for Congresswoman Zoe Lofgren, she became captivated by community engagement. “As a child of immigrants, it was interesting to me that people reached out to their elected officials when they had concerns,” she says. “It wasn’t something that my parents ever did.”

Inspired, Sharma started taking classes in urban planning and studied in London for a semester where she also interned for a member of Parliament. Law school taught her critical thinking. “Identify the issue, apply the rule and the analysis, and then find the conclusion. The framework has helped me professionally,” she says.

While studying for the Bar, Sharma went to work for FMHC Corporation as a project manager for cell site acquisition and zoning. It was a “perfect marriage” for her legal background and her political interests as she negotiated lease agreements with property owners and advocated in front of city councils to get wireless projects approved. 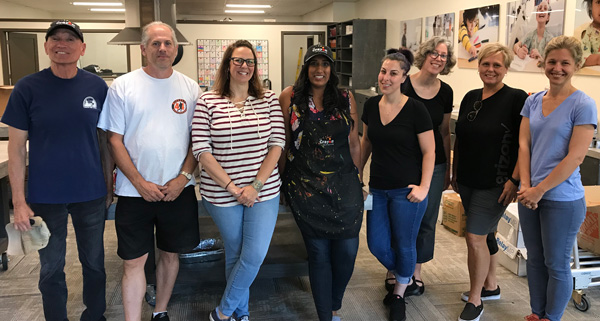 When an opportunity at Verizon came along, Sharma jumped at the chance to manage a team that oversees vendors that work for Verizon’s network. For three years she was Senior Real Estate Manager, then last year became Senior Manager of Municipal Engagement. She was able to create a seven-member team from scratch, the first of its kind for Verizon, and now a model for other emerging regions.

“Radha is a highly respected leader. She is a process innovator and molder of new teams. Through her example and collaboration, she draws those around her to perform to a higher standard,” says Susan Lee, Senior Manager of Implementation for small cells at Verizon.

Based at Verizon’s regional headquarters in Walnut Creek, Sharma oversees a region running from Bakersfield north to the Oregon Border and including Nevada, though not Las Vegas. Her team is currently focused on the deployment of “small cell” technology through partnerships with cities.

As cellphone usage has exploded, and as 5G wireless looms, carriers have needed to “densify their networks” by adding new network equipment closer to users. The key is small cell technology, which operates at lower power levels to fill-in gaps in the tower network. 4G small cells and towers share the same frequencies, while 5G small cells will add additional frequencies able to deliver data between 10 and 100 times faster than 4G cellular connections.

“Radha is a highly respected leader. She is a process innovator and molder of new teams. Through her example and collaboration, she draws those around her to perform to a higher standard,”

Small cells “…are needed to meet exploding consumer demand for data, drive innovation, create new jobs, and fuel new services and capabilities such as smart communities, connected cars, smart farming, and the Internet of Things,” states Verizon in a filing with the Federal Communications Commission. Last year the company spent more than $10 billion on such installations. A report from Accenture estimates that total investment in 5G across the entire country will be $275 billion.

Half of Sharma’s team works with the cities and city attorneys to negotiate the agreements needed to deploy small cell technology, and half are focused on community outreach. They provide education to elected officials, city staff, and residents on the benefits of small cells and respond to questions.

Everyone wants to be connected, especially in Silicon Valley where exponential increases in mobile data usage drive a need for more coverage and system capacity. At the same time, many local governments are hearing from NIMBY (“Not in My Backyard”) neighborhood groups who oppose such projects which can pose a challenge to outreach efforts.

About the size of a pizza box, a small cell installation consists of miniature radio equipment that can be placed on structures such as streetlights, the sides of buildings, or poles. They are installed every few blocks and help bolster 4G and 5G network capacity.

It will be a few more years before 5G coverage reaches beyond urban city centers and even longer before the average consumer makes the leap from 4G to 5G. There are only a few 5G smartphones available today, but 5G is not just about smartphones – the technology will enable machine-to-machine networks (the Internet of Things), and provides an alternative to wired broadband.

Sharma first became involved with Joint Venture through David Witkowski, Executive Director of Joint Venture’s Civic Technology Initiatives. Both Witkowski and Sharma are frequent speakers at wireless communications forums such as the International Wireless Communications Expo in March 2019 speaking on such topics as Siting and NIMBY: Deploying 4G HetNets and 5G for Smart Communities.

“David really is a powerhouse within the telecom space for us as carriers. He is very well respected and he is able to bring people together, both cities and carriers, in order to figure out how to have a collaborative solution,” says Sharma. “And Joint Venture provides a wealth of information, via the Index and State of the Valley.”

“Joint Venture provides a wealth of information, via the Index and State of the Valley.”

How does Sharma see the future through the lens of 5G? Sharma believes that the technology can assist cities in dealing with their biggest challenges: housing, traffic, and homelessness. “I think that 5G really has the potential to help with some of those things,” she says. “They say autonomous vehicles will reduce the number of cars on the road.”

She also believes the technology can save lives, citing its potential to enable remote surgeries. “If a rural patient can’t get to a prestigious hospital like UCLA or UCSF, 5G will change how we get to those patients,” she says.