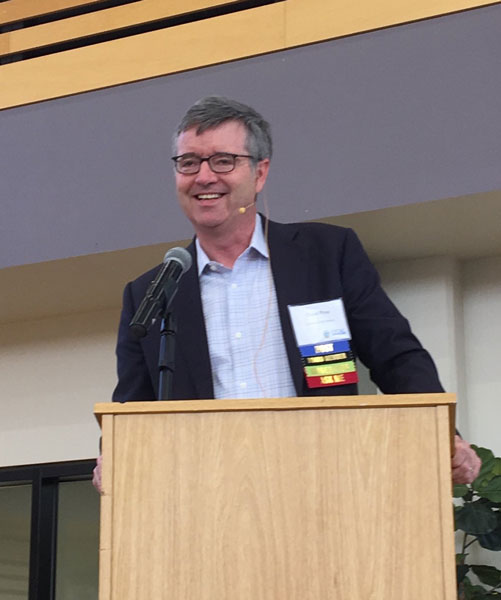 San Mateo County Board of Supervisors and Joint Venture board member

San Mateo County Supervisor Dave Pine is a disciple of actionable idealism, “to dream big and actually accomplish things,” a mantra he actively demonstrates as a leading environmental voice in the Bay Area. From small-town New Hampshire as the son of educators, a stint in the legislature before the age of 20, to Silicon Valley tech law, and the front lines of Bay Area politics, Pine has enjoyed a diverse career.

First elected to the Board of Supervisors in May 2011, Pine represents San Mateo County District One. With a population of over 750,000 people, San Mateo County occupies 741 square miles of the San Francisco Peninsula, of which 293 is water. The county includes the rugged Santa Cruz Mountains, scenic beaches, and the massive San Francisco Bay. The setting is a juxtaposition of densely-populated cities emerging out of redwood forests and watersheds and home to Facebook, Oracle, and YouTube.

What motivates Pine most is the looming issue of climate change. “I work on a host of issues but the biggest challenge we face on the planet today is climate change,” says Pine. “We need to show leadership locally and hope that others will follow.”

“Dave Pine stands out among elected officials in the Bay Area. His success at moving his jurisdictions in the right direction stems from his dogged persistence, the fact that he has no fear of innovation, and he does it all with a pleasant demeanor in service to great causes,” says Len Materman, Executive Director of the San Francisquito Creek Joint Powers Authority who has worked with Pine for more than seven years.

Pine was born in Massachusetts and raised in the university town of Durham, New Hampshire. “We were outdoors all the time,” he says. Education must have been in the water. His father was a professor of education who later became a dean. His mother was a community college professor, his brother is an elementary school principal, and his sister is a college admissions officer.

“Dave Pine stands out among elected officials in the Bay Area. His success at moving his jurisdictions in the right direction stems from his dogged persistence, the fact that he has no fear of innovation, and he does it all with a pleasant demeanor in service to great causes.”

Pine is a graduate of Dartmouth College, where he studied government and economics. He spent a quarter abroad at the London School of Economics. After Dartmouth, Pine spent a year in Washington, DC before heading to the University of Michigan Law School. He spent a summer as an intern at Fenwick & West in Palo Alto before accepting a post at the firm in 1985. After five years in private practice representing start-up tech companies, he served as Vice President and General Counsel for Radius, Excite@Home, and Handspring.

Pine was wired for politics early. He volunteered as a college freshman in the summer of 1978 to be the driver for New Hampshire gubernatorial challenger Hugh Gallen. “We traveled to every nook and cranny of the State of New Hampshire in true grassroots fashion. We went to factories, visited every tiny radio station and newspaper, and walked the main street of every town we visited and just talked to people,” he says. Gallen won and the new governor and his family became close. “They kind of adopted me,” says Pine. “When he won it was just extraordinarily exciting.”

Soon after completing his gig as a chauffeur, Pine won a seat in the New Hampshire House of Representatives at the tender age of 19 while a sophomore in college. After he became an attorney,
he served on the Redwood City Planning Commission, the Burlingame School District Board of Trustees, and the San Mateo Union High School District Board of Trustees. He failed to land a seat in 2002 for California's 19th State Assembly district. 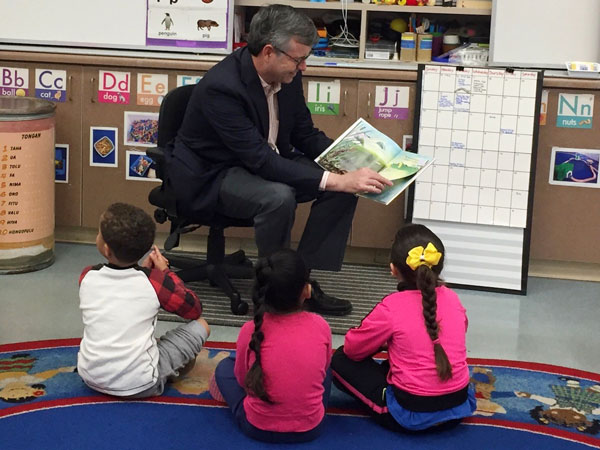 When queried about what a county supervisor does, Pine says that county government is an invisible layer of government despite the fact that it's large and touches many people's lives. “San Mateo County employs approximately 5,800 government employees and has a combined capital and operating budget of over $3.5 billion,” says Pine. “Our primary responsibility is to administer the social safety net.”

That safety net falls into three categories: health, public safety, and social services. County supervisors are responsible for the budget and the oversight of those areas in addition to a broad array of other issues that arise, including housing, transportation, and climate change.

“I've put a major focus on climate change, both the urgency of reducing carbon emission, and unfortunately preparing for the impacts of climate change that are happening now and will become much worse,” says Pine.

Pine views his district as a microcosm of the Bay area due to its incredible economic inequality and diversity. His district includes the town of Hillsborough, one of the most affluent communities in the country, plus San Bruno and South San Francisco where some people struggle to get by.

Pine is perhaps most proud of the role he played as founding chair of Peninsula Clean Energy, which was the fifth community choice energy enterprise created in the state. “It brings control of the energy supply down to the local level, provides cleaner electricity at lower rates, and enables us to invest in other sustainability programs. I'm just thrilled about how it's worked out,” says Pine. “It's a great testament to people's commitment to the environment and to addressing climate change.” 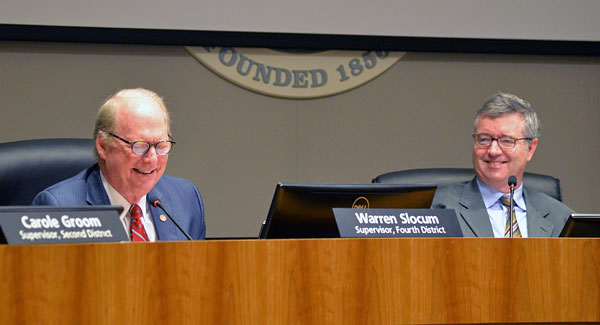 Pine and his wife, Jane, have two sons: Kevin is a freshman at Worcester Polytechnic Institute in Massachusetts and Jack is a high school junior into the performing arts. Jane is an attorney who does pro bono work for the Nature Conservancy. Family time is spent outdoors hiking and fishing and having fun exploring the Bay Area. Pine and his oldest son enjoyed an “epic” fishing trip to Alaska this summer, surrounded by happy grizzly bears noshing on salmon. The Pine family enjoys access to the nearby trails on the Peninsula, with Wunderlich County Park and Butano State Park near Pescadero among their favorites.

In conversation, Pine is congenial and punctuates his dialogue with thoughtful pauses. He admits to being an introvert despite a robust schedule that includes public meetings, coffees with constituents and long board meetings.
As an introvert, he most relishes the opportunity to pore over policy and hash through the finest details. “I feel fortunate to have a legal background because everything we do is complex, often highly regulated, and has a legal overlay,” says Pine.
Pine feels he has had two distinct careers. “I was a tech attorney for over 20 years. I've been a supervisor for eight years,” says Pine. For a third chapter he might consider teaching or serving as a nonprofit executive. But he’s not done with politics and is eying another run for State Assembly when he terms out of his county supervisor position in 2024.

Pine and a friend plan on making a pilgrimage to Plains, Georgia to hear President Jimmy Carter preach in Sunday school. “His moral compass and basic decency is in sharp contrast to what we too often see in politics today. Remarkably, after his presidency, he moved back to Plains to his $150,000 ranch house and gave the rest of his life to service,” says Pine. “I don't think we'll ever see someone like him again.”

As a member of the board of directors for Joint Venture, Pine first became involved more than 10 years ago when he attended the State of the Valley conference. He attributes his focus on the issue of sea level rise in part to a Joint Venture-hosted presentation by author John Englander who wrote High Tide on Main Street, a wake-up call on perhaps the most profound impact of climate change.

Pine cites Joint Venture’s role as an effective convener and as catalyst for people to accomplish things and provides insight to the economic landscape. “The 2019 Silicon Valley Index points out that a quarter of the families in this region earn over $200,000 a year but 37% of the kids receive free and reduced lunch,” says Pine. “That’s something policy makers should not lose sight of.” He also values Joint Venture for providing “an opportunity for business people who want to contribute to addressing challenges in the region.”

He also values Joint Venture for providing “an opportunity for business people who want to contribute to addressing challenges in the region.”

Pine sees the future of transportation in the region as transformative. He cites the completion of the Bart extension in the South Bay, the expansion of express toll lanes, the electrification of Caltrain (Pine is on the Caltrain board) and the potential for tripling its ridership from 65,000 today to over 180,000 people a day, and Facebook’s partnership with the San Mateo County Transit District to potentially reactivate the Dumbarton rail bridge for passenger service. He doesn’t think it will ever be easy to drive around Silicon Valley, but with major transportation enhancements and high-density housing developments, he’s confident we will see improvements.

He is worried about the cost of living and finding a way to maintain an economically-diverse community, where you don’t have to be at the top of the pay scale to live in the Bay Area. “It's hard to start a family here, schools are losing students because families are moving away, and our bus ridership has dropped in part because our bus service primarily helps people with lower incomes who don't have other alternatives,” says Pine.

“But Silicon Valley is still the place for the best technical and startup minds. There's still something magical about the place. I think we're going to be fine,” Pine says. “I have great faith that we can solve our problems and that people want to work together and go in a positive direction. Actionable idealism means you have to actually get things done.”

5 Things to know about Dave Pine