Dillabough, a former eBay vice president and venture capitalist, created the development firm Urban Community with longtime Silicon Valley builder Jeff Arrillaga in 2017. As front-man for the organization, Dillabough has gained a reputation for not just getting things done, but getting things done well.

From the acquisition of the historic Bank of Italy Building to the launch of the Museum Place project and its plans for what seems like innumerable other San José properties, Urban Community’s activities make news. Dillabough has even encouraged local artists to paint murals on the sides of his old buildings and made space for music groups to hold pop-up parties.

“I love people and I love to talk to people”

The Dillabough vision? Lively public spaces that integrate the arts, eco-friendly architecture, and people-centered design. He has charmed and inspired everyone with his vision and a knack for outreach to decision makers and residents alike. “We want to make one of the best cities in the U.S.,” Dillabough says of San Jose.

Baltimore-born Dillabough, who has served on the Joint Venture board of directors since 2019, is warm and engaging. As high profile as he has become in just a few short years, he is still approachable and soft spoken, even modest in demeanor. He is quick to acknowledge his team and to give others credit.

I first interviewed Dillabough at his office overlooking Fountain Alley in early March, just days before the county’s coronavirus lockdown. There were no face masks in sight and it was too soon to comprehend where the new normal would lead. 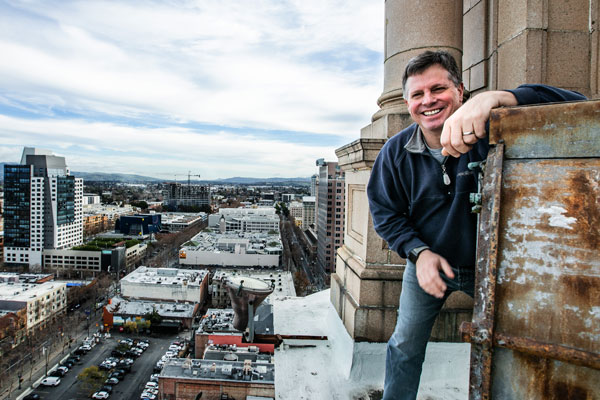 Dillabough and Arrillaga had recently announced their partnership with one of Canada's largest residential and mixed-use developers, Westbank Corp., to develop a portfolio of downtown San Jose sites. Westbank is one of the world’s largest LEED Platinum developers with more than $25 billion worth of real estate projects constructed or under development in Tokyo, Vancouver and Seattle. According to Dillabough, Westbank wanted one more city, and after a year of courting, committed to San José.

Questions about the new partnership prompted enthusiasm on the architecture that inspires him. Breaking out a large coffee-table-size book, Dillabough cites Tokyo-based designer Kengo Kuma for his style of elegant simplicity and connection to nature. “This is my favorite building,” he says. “It's not just about the structure, it's not just about the parking garages, but it's the total work and how it comes together.”

The centerpiece of the Urban Community portfolio may well be the Bank of Italy Building, a 14-story, Renaissance Revival built in 1925 that Dillabough scooped up in 2017. He offered tours to anyone who asked up until the lockdown. The tower offers one of the few truly grand structures in a town that has rarely been notable for character. Dillabough plans to create offices above and public spaces at ground level. 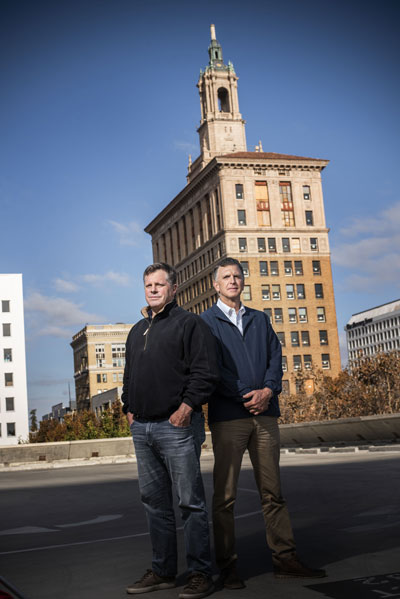 The son of a civil engineer who worked for the Federal Highway Administration, Dillabough and his family moved around a great deal when he was very young: from Maryland to San Bruno, Hawaii and back to California where the moving stopped. He has been here since first grade.

Dillabough earned a degree in civil engineering from Cal Poly, San Luis Obispo. He is married to Michelle White Dillabough who came from a family of Silicon Valley real estate developers. In their free time, they enjoy water skiing and snow skiing. Empty nesters, they have three kids in college who attend Santa Clara, Duke, and Boulder.

Out of college, Dillabough first worked for Cornish & Carey in San José where he met Arrillaga. At eBay, Dillabough was one of the first 100 hires and the head of environmental affairs. He then became a managing partner at venture firms Westly Group and Navitas Capital. But he was drawn to development because it was always his original plan.

If he wasn’t doing what he’s doing, Dillabough says he would be a winemaker. He loves Napa. “But, honestly, this is my job. This is the fate. I love people and I love to talk to people,” says Dillabough.

Once the lockdown hit, and in just two weeks, Dillabough and his partners conceptualized and executed on a nonprofit relief effort they dubbed Shelter-in-Place Kits, or SHIP Kits, to provide essential supplies for people hit the hardest. In just four months and with the assistance of volunteers, SHIP Kits has distributed 12,400 kits, helped 75,000 people, donated 100,000 pounds of fresh produce, and raised over $600,000 from individuals, corporations, and foundations.

“It has been inspiring to see Gary further step up his investment in our community as the pandemic hit. The SHIPKits project, providing much needed resources to community members, is just another example of the thoughtful, caring, and creative way he leans into his support of San Jose”

“It has been inspiring to see Gary further step up his investment in our community as the pandemic hit. The SHIPKits project, providing much needed resources to community members, is just another example of the thoughtful, caring, and creative way he leans into his support of San Jose,” said Janikke Klem, Vice President, Community and Government Relations - Technology Credit Union. “The operation they set up was impressive, from logistics to volunteers to delivery, it was amazing they put this all together so efficiently and effectively.”

As for Joint Venture, Dillabough values the data that the organization provides. He finds it helpful in understanding the jobs and housing and balance.

What’s next? Prior to the pandemic, Dillabough hoped that his projects would be completed in the next five to seven years and help give San José the critical mass to become a long-term home for companies with a world-class vibe. What cities does he love? He mentions Sydney and Nashville for their energy and integration of music and arts.

Turns out Dillabough also loves what he does. “I really enjoy working. I mean, it's, to me it's really not working,” he says. “We want to be part of the community in a meaningful way.”

“In downtown we care more about community and quality of life for people. The future is going to be understanding where people live, how they get to and from work, how they have a nice work environment, and then what they do around work, where they go to lunch, where they go to dinner, what they do on the weekends. Can we accelerate how you create great community by planting some seeds?”