Santa Clara County Board of Supervisors, District 4 and Joint Venture board member

“I intend to use my role as the chair of the Public Safety & Justice Committee and Vice Chair of the Health & Hospital community to address racial inequities and disparate outcomes in our health care and criminal justice systems.”

When Santa Clara County Fourth District Supervisor Susan Ellenberg took office in January 2019, she hoped to focus on children and family issues. There was much work to be done, and county government – the social “safety net” for the region – was the perfect place to accomplish it.

Just over a year later a new priority engulfed her agenda. Helping her district navigate a pandemic was suddenly part of Ellenberg’s job description.

Fortunately, Ellenberg is adept at adjusting to circumstances. “Coming into this fiscal year, I realize that some of the programs I was most excited about may have to wait or be modified in order to fund things necessary to combat the virus and its impacts,” she told her constituents in a July newsletter. “Yet, through it all, there is one constant: my commitment to the well-being of all children and families in this County.”

It’s a commitment that started early, and stretches through her entire life. Born and raised in Pittsburgh, Pennsylvania, Ellenberg grew up the daughter of a noted burn surgeon. Her mother was a former teacher who stayed at home with Ellenberg and her two younger twin brothers. In her household there was immense pressure to succeed. That environment took some toll on Ellenberg as a child and as a teenager, leading decades later to an understanding of how her father’s experience in Viet Nam shaped his vision of the world and, by extension, sought to shape hers. She describes that journey as difficult and painful and yet it inspired her to share her personal story with candor hoping to de-stigmatize mental health issues; from PTSD to depression and anxiety. 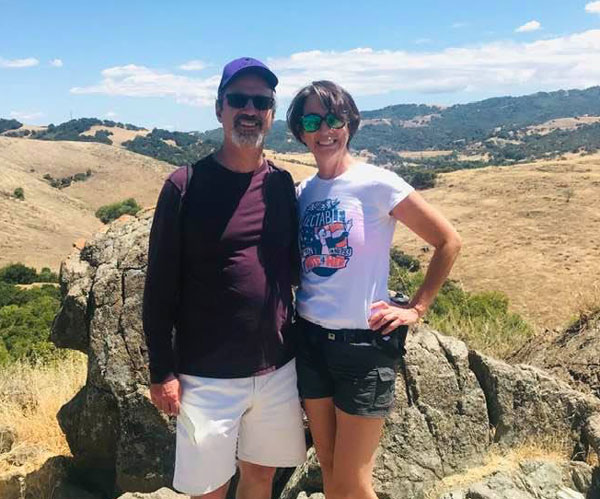 At Barnard College, Ellenberg majored in history before going to Columbia University School of Law. In her junior year at Barnard, she spent a semester at Tel Aviv University. “It's one of the best single periods of my life and I loved it,” she says. In Israel she increased her proficiency in Hebrew, which allowed her to comfortably move through the region. She also spent every weekend hiking and backpacking. The reward was a new sense of self-sufficiency and confidence.

In law school the then-Susan Slater met San José native Steve Ellenberg, whom she married at the end of her second year.

Ellenberg moved to San José in 1991 where she worked as a real estate and land use attorney. But after three years she determined that law was not her passion. She was helped to the conclusion by a law partner who shunned her when she became pregnant with her first child. But the transition was hard.

It was San José Mayor Susan Hammer, a family friend and devoted mother herself, who gave Ellenberg permission to stay home with her newborn son in a heartfelt conversation. “For the first time I thought maybe I can do this without diminishing my self-worth,” says Ellenberg. She and Steve ultimately raised three children, Zach, Molly, and Naava, who today are adults and scattered across the nation.

When Ellenberg did return to work, it was as a teacher. Ellenberg taught social justice and civic engagement for six years to middle school students at Yavneh Day School, and those lessons became a jumping-off point for her own next move: “I decided that the best way to influence policy that impacted students was to run for a seat on the school board,” she recalls. Ellenberg served on the San José Unified School District Board of Trustees from 2014 to 2018, and as the Board President in 2018.

Superintendent of San José Unified School District Nancy Albarrán worked closely with Ellenberg. “She has a deep understanding of the importance of supporting the whole child in order to ensure academic success,” Albarrán recalls. “During her tenure, San José Unified significantly expanded the number of counselors at schools, implemented the SAT for all 11th graders initiative, and executed SAT preparation courses for our low-income students. She nurtured and championed student-led initiatives to modify dress codes and designate gender inclusive restrooms on every high school and middle school campus in the district. She listened to everyone and kept her focus on what was best for students. Her passion and commitment to education were highly evident throughout her time on the Board.”

“She listened to everyone and kept her focus on what was best for students. Her passion and commitment to education were highly evident throughout her time on the Board.”

In 2018, Ellenberg won an open seat on the Board of Supervisors in District 4, where she represents a diverse population of more than 400,000 residents in the unincorporated neighborhoods of Cambrian and Burbank, plus the cities of Campbell, Santa Clara, and nearly a dozen neighborhoods in San José. “Women are dramatically underrepresented in elected office, and it takes a significant amount of fortitude to dive into this aggressive and competitive work,” says Ellenberg.

When asked what a County Supervisor does, Ellenberg cites inspiration from an unlikely source, given her Jewish faith: the vision statement of a Catholic Charities initiative called “Step Up Silicon Valley”. “My job is to help make sure that everybody has a safe and stable place to sleep, regular access to enough nutritious food and an opportunity to get a good education,” she says. “Every community member should have access to affordable medical care and the opportunity to work at a job that allows them to support their own family.”

She pursues these goals in a variety of ways.

An avid reader, Ellenberg prior to the lockdown held D4 Reads: Storytime with Supervisor Ellenberg at libraries throughout her district. “I’m kind of risk-averse myself and I love reading exciting adventure,” she says.

A consummate educator, she also produces quick weekly videos on Facebook, in which she personally covers topics from women’s suffrage to civic engagement.

But most of the job is about the policy details, and Ellenberg approaches those with uncommon passion.

“There is space to pursue policy around the issues that I am most passionate about. I can drive some conversation and make real change,” she says. 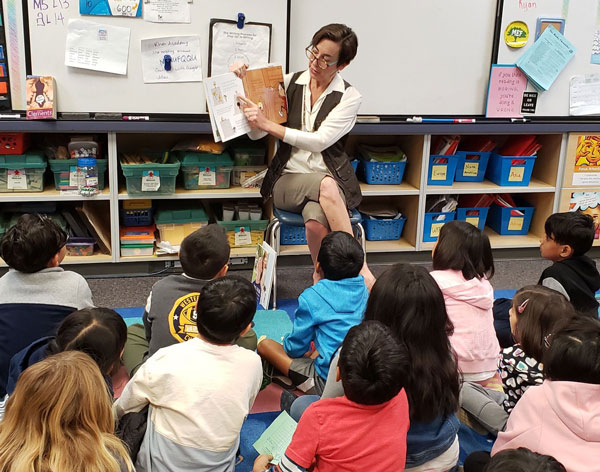 Ellenberg recognizes that the COVID-19 crisis has shown that vulnerable and marginalized communities are most disproportionately affected by the virus as a result of health care, systemic inequities, overcrowded housing, and a decreased likelihood of having the option to telecommute.

“The County’s primary responsibility is to offer a strong safety net and that means one that is not structurally designed to hold some communities behind others, largely determined by race. I intend to use my role as the chair of the Public Safety & Justice Committee and Vice Chair of the Health & Hospital community to address racial inequities and disparate outcomes in our health care and criminal justice systems,” she said.

Ellenberg hopes to “reimagine” public safety and justice. She has a platform to address manifestations of unrest on the heels of the George Floyd and Breonna Taylor murders and the systemic issues that lead to disparate outcomes.

She held three facilitated “conversations” with more than 400 citizen attendees and 18 different organizations. The results are being compiled with a recommendation expected in August for implementation in the next budget year. She anticipates measurable outcomes: Are people safer? Is the community thriving? “I intend to see it through. I feel like this is among the most important things that I can be doing right now,” said Ellenberg. The District Attorney, Public Defender, Police Chiefs Association, and Sheriff have also contributed to the process.

Ellenberg first became aware of Joint Venture Silicon Valley when she attended the State of the Valley conference in 2017. “I was just blown away by how comprehensive the data was. The caliber of the analysis and research is extraordinary. More people would benefit from knowing about this resource.”

Admirers say she has the ability to meet even these profound challenges. “When I think of Susan I think of her curiosity and courage; not afraid to question the status quo and stand up for what is right rather than what is popular,” said Meri Maben, former District Director for then-Congressman Mike Honda. “Her curiosity drives her insatiable love of learning as demonstrated in the insightful, bold questions she asks.”

Ellenberg first became aware of Joint Venture Silicon Valley when she attended the State of the Valley conference in 2017. “I was just blown away by how comprehensive the data was. The caliber of the analysis and research is extraordinary. More people would benefit from knowing about this resource,” she says.

Ellenberg is currently working with David Witkowski and the Joint Venture Civic Technologies Initiative team to tackle the digital divide in the region, magnified by the pandemic. A preliminary dialogue on disparities in distance learning evolved into the goal of a pilot program addressing the problem that can be replicated countywide. Ellenberg envisions a solution that would connect every home in every neighborhood to enable distance learning, telehealth, and more. 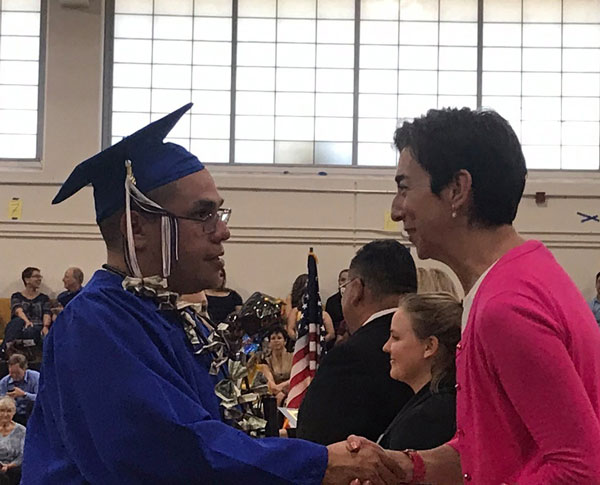 What does the future look like for Silicon Valley? Ellenberg thinks the pandemic has forced a moment of reckoning and made people more open to taking a hard, non-defensive look at the racial disparities that pervade social structures: workplaces, education, health, housing, food security, public safety. She sees this moment as an opportunity to reimagine systems that perpetuate disparities.

Ellenberg also envisions a correction of the astronomical cost of housing in Silicon Valley and an opportunity for residents who don't have the option to telecommute to live closer to where they go to work.

“I think that we may see a shift in use of transit. And I hope that we see a real shift in how we work to create thriving neighborhoods, again, not through more policing, but through investment in high quality infrastructure, community services and activities, and access to quality, affordable childcare and living wages so that people can live with stability and provide for their families.”

“We can't continue on this trajectory of two valleys. It isn't sustainable or healthy for anyone.”

5 Things to know about Susan Ellenberg