In a pre-COVID world, a writer would have traveled across town to interview an executive like Christina Briggs, deputy city manager and economic development director for the City of Fremont. There would be a degree of formality and layers of staff to pass muster with before getting to Briggs.

Instead, all protocols and formalities fall to the wayside as I am greeted over a Zoom call by Briggs herself, who is at once warm and engaging and as focused as a laser beam. She and her team have mostly been working from home since the lockdown in March.

That’s especially challenging for someone whose job depends on interactions with members of the public and the business constituency she serves. Yet like many who are succeeding in a difficult time, Briggs is learning good things about how she and her team can function. “The silver lining is that we've seen that we could rise to the occasion.”

A true native of the Valley of Heart’s Delight, Briggs was born and raised in Santa Clara County. She grew up in Morgan Hill and continues the tradition by raising her own son there.

As the daughter of two public-school educators, Briggs always knew that education was of paramount importance. One parent taught at San José State University and one taught in the Franklin McKinley School District in San José. Briggs and her sister learned to cope early on with the dreaded red-pen edits on homework.

Briggs met her husband Brian, an engineer at Adobe, in middle school. Married for 13 years, they have an eleven-year-old son together.

In her personal time, Briggs loves to cook and says she might be a chef or a sommelier if she wasn’t in city management. What’s her favorite dish? Cornish pasties. She started following soccer to connect with her son but it has become a passion to attend Earthquakes games and watch contests on TV.

Briggs attended the University of California at Santa Cruz where she earned a Bachelor of Arts in Language Studies. Santa Cruz was a natural choice. Her grandparents lived there and it was a place that she felt close to. “I wasn't quite ready to go across the country and California has an excellent public university system. Staying in California just made a lot of sense for me,” says Briggs.

She broadened her perspective in other ways. As a French major, Briggs went to France to study. She traveled throughout Europe, parts of Central and Latin America, and Asia. “Travel gave me an open mind and a global perspective,” she says.

When it came time for grad school, Briggs chose Middlebury Institute of International Studies at Monterey where she majored in public administration, international development, and economics.

“Inspired by my public-servant parents, I knew that I was going to pursue public administration,” she says.

While in grad school, Briggs interned for the city of Santa Cruz in the city manager's office, an experience that laid the foundation for her future path. After graduation, she took a job in Anaheim as a project manager in redevelopment and economic development, where she stayed for six years.

In Anaheim, she worked on a project that transformed a blighted downtown into a thriving civic center that has become the social heart of that community. “It's so gratifying and if you go there today, it's night and day from when I first started working there.”

Fremont is a large city geographically with an impressive industrial base. With a culturally-diverse population of about 240,000, it is the fourth most populous city in the Bay Area. The city boasts 1,200 high tech, life science, and clean technology firms. Tesla, the largest employer with more than 10,000 workers, has proved to be a high-profile catalyst for the city’s growth.

What does a day in the life of a city executive look like? In a typical day, Briggs switches rapidly among the array of topics associated with economic development. “We're the sales and marketing arm of the city. Pre-COVID, we were out meeting with businesses or at events pitching the city in sales mode,” she says.

“Christina is a great listener and brings a pragmatic approach to economic development. She also has the unique ability to balance the aspirational objectives of a community with the realities of the marketplace.”

Briggs enjoys bridging two diverse worlds. “I love being that interface between the private sector and the public sector,” she says. “It's there that a translation is often needed, to get those two worlds understanding or being on the same page about something.”

“Collaborative is a perfect word to describe her approach whether it’s with a community stakeholder or external partner,” says Greg Matter, Managing Director of JLL . “Christina is a great listener and brings a pragmatic approach to economic development. She also has the unique ability to balance the aspirational objectives of a community with the realities of the marketplace.”

Since the onset of the pandemic, Briggs and her team are sustaining economic development and fundamental interactions virtually. She relates that 2020 has been one stream of emergencies after another. First came the pandemic, followed by civil unrest which created difficult conversations about equity, policing, and race. And then . . . wildfires.

“It has really tested the resiliency of our teams,” she says. “It's been relentless for seven months straight and yet I feel very proud of our team and what we've accomplished.” 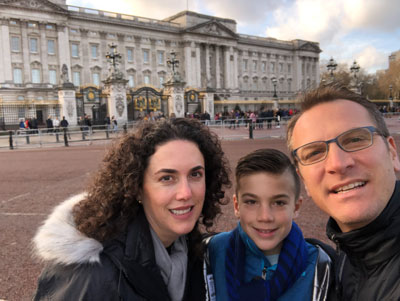 Briggs will soon complete her term as chair of Joint Venture’s Silicon Valley Economic Development Alliance (SVEDA), a consortium of 25 city and county economic development professionals who bring together public and private resources to ensure the success of regional businesses.

She first became involved more than 10 years ago.

“Ten years later, I still rely on SVEDA for the wealth of information, the sharing of best practices, the support system, and engagement with other economic development professionals,” she says. “I have a fierce commitment to Joint Venture for its leadership in the region and on policy issues that are pressing for Fremont and for everywhere else too.”

Briggs thinks people might be surprised to know the range of offerings that Joint Venture provides on policy topics, research, sustainability, and the wireless initiative. “It's so much more comprehensive than most people realize and it’s the leading think tank in our region.”

Briggs uses the Silicon Valley Index as a tool all year long. “We talk to many different audiences and that data is very helpful for us in telling that story. When we present to our city council we rely on the Index data to formulate those policies and present them.”

Briggs thinks people might be surprised to know the range of offerings that Joint Venture provides...“It's so much more comprehensive than most people realize and it’s the leading think tank in our region.”

“Christina’s thoughtfulness comes through in everything she does,” says Kelly Kline, chief economic development and land use officer in Mayor Sam Liccardo’s office. “She is studied and synthesizes everything that’s important and a trusted advisor in all circles with a high emotional IQ and intense environmental awareness.”

What’s next as the region looks beyond the pandemic? “We have been through some pivotal moments and have been through serious experiences that I do think are going to reshape how certain things function and maybe that's for the better,” Briggs says.

“Industries and government are innovating and moving fast. That means we must adapt and embrace long-term planning. Even though we can’t convene and be together, we can take a long-term view intentionally, and I think in this case, it's actually a really healthy thing.”

5 Things to know about Christina Briggs