“The place God calls you to is the place where your deep gladness and the world’s deep hunger meet.”

The American writer and theologian, Frederick Buechner, notes that the English word "vocation" comes from the Latin word vocare, to call, which means the work a person is called to by God. Greg Kepferle, CEO of Catholic Charities of Santa Clara County (CCSCC) cites Buechner as he reflects on his own calling.

“If this job didn’t already exist, I would have invented it,” he says with the soft-spoken warmth of a pastor.

Once on track to be a Jesuit priest, Kepferle met his future wife, Jean Blomquist, at a softball game at the Graduate Theological Union in Berkeley. “I tagged her out on third base,” Kepferle laughs.

“It took me 10 years to figure out that God had other plans for me, notably marriage,” he says. He ended up leaving the Jesuits in the middle of his theology studies and is now what he calls “part of the Jesuit underground.”

The call to service was sounded early by his parents. “It was expected of us to help others,” he says. He gained a passion for human services through his uncle who ran rural health programs in the Peace Corps. Today he is manifesting that passion in collaboration with Joint Venture’s new Building Back Better initiative. 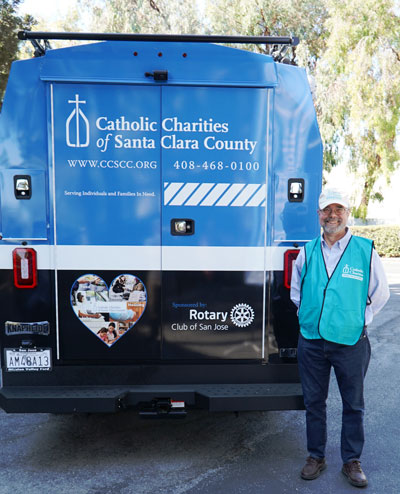 Born in Denver, Kepferle moved around a great deal when he was young as his father worked as a geologist for the U.S. government. The family moved from Tokyo to Kentucky and eventually to Cincinnati where he went to high school.

Today, Kepferle and Blomquist live in a rural area between Morgan Hill and San José. He loves to read detective stories and garden. He loves to get out into nature and go for hikes. He loves Dixieland jazz and once played the saxophone in his high school band.

At CCSCC, Kepferle leads a staff of 460 people and 1,200 volunteers. CCSCC is a $41 million nonprofit and part of a national network that works to build economic self-sufficiency for the poor and vulnerable. Associates say the work suits him well.

“Greg is someone who exudes warmth and compassion,” says Leslie Bacho, CEO of Second Harvest of Silicon Valley. “When I first joined the nonprofit community in San José, he was welcoming from the beginning and reached out regularly to explore ways that we could partner.”

In his 30 years with Catholic Charities in three different locations, Kepferle has dealt with floods, fires, and earthquakes, including Hurricane Katrina and the local 2017 Coyote Creek flood.

“But this pandemic was incredibly overwhelming,” Kepferle says. “ It has a much stronger economic impact, especially on those who are most poor, most vulnerable, communities of color.” And, he warns, the tail of any disaster is much longer than anyone anticipates.

“Greg is someone who exudes warmth and compassion”

CCSCC has focused on disaster response after the City of San José and the County of Santa Clara asked the group to join the launch of Bridge to Recovery — a collaboration of government, nonprofits, and business convened to help people navigate the pandemic and get back on their feet. Bridge to Recovery is now part of Building Back Better.

“We knew that in addition to food and housing, people would need help getting back to work,” says Kepferle. “Bridge to Recovery came out of conversations with CADRE — Collaborating Agencies’ Disaster Relief Effort. And it was clear that we needed to have an emphasis on equity.”

During the pandemic, CCSCC has provided groceries and meals to 17 million people (and counting). In a typical year, they would have served about 400,000 meals.

“When there's a disaster, most people run away from it. Our job is to run towards it, to help the people who are in need. And my job as leader is to lead the team,” Kepferle says.

“I'm really excited that Russ said yes, and that Joint Venture stepped up as the backbone organization, for Bridge to Recovery,” says Kepferle. “Our best gift to Catholic Charities is our advocacy and our connection with the community and the direct services doing employment, at immigration work. What we don't have is the research component that Joint Venture has and the strong connections in its convening role.” 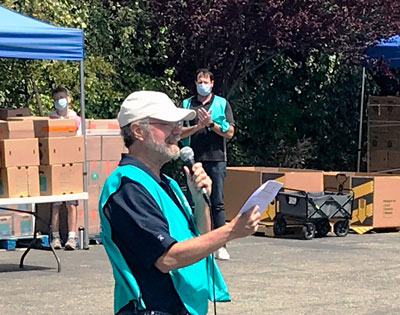 Kepferle is confident that Joint Venture is “the premier convener and researcher” for the issues affecting Silicon valley and our communities. “Joint Venture is highly respected both in the business world and in the philanthropic world, is a trusted partner and does not have a conflict of interest.”

Asked how he navigates the fine line between advocacy and politics, Kepferle underscores that advocacy is a key part of his mission. “A part of our role is to transform society, to advocate for systemic change, to solve underlying causes,” he says, beaming. “We advocate through policy solutions to the root causes.”

Part of his strategy is to train the people they serve to be self-advocates: teaching parents how to advocate for their child, with their teacher, with the school board for what the community needs or with their city council member or supervisor.

“Greg has a contagious passion for creating lasting solutions that support our most disenfranchised neighbors,” says Patrick Dupuis, a Catholic Charities board member. “He is teaching us all to be humble enough to help when asked instead of forcing solutions on others, to advocate at every opportunity rather than wait for a crisis or a fundraiser, to believe in and build upon every sign of progress instead of being overwhelmed by the magnitude of the social and inequity gap.”

Kepferle says it’s a privilege to lead a team that is committed to fighting poverty with a sense of compassion and skill. “And, we're part of an amazing community of like-minded nonprofits who are absolutely committed to our community and to addressing issues,” he says.

“Joint Venture is highly respected both in the business world and in the philanthropic world, is a trusted partner and does not have a conflict of interest.”

Kepferle envisions a future that is more equitable, more inclusive and more affordable for the workers in Silicon Valley. “That's what I'm hoping Bridge to Recovery will help, by enabling workers to find great jobs, enabling people who are struggling to get help without having to jump through so many hoops, get help quickly and have that help be sufficient to make ends meet,” he says.

His imagination is powerful.

“Imagine an America in 2030 where every child, regardless of race, is healthy, housed, fed, and educated,” Kepferle said in a compelling video he created last year. This local leader is not letting the challenges of the present dim that powerful vision of the future.