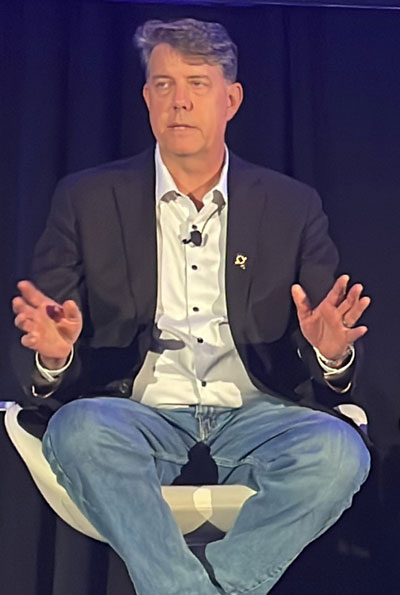 David Witkowski is a quiet yet purposeful leader who works at the intersection of wireless telecommunications and regional governments. His own career path has followed the path of technology itself, from early key punch cards to 5G mobile connectivity.

As Executive Director of Joint Venture's Wireless Communications Initiative, David agilely interprets the most technical scenarios down to understandable elements to make concepts palatable for novices. David approaches challenges in a non-traditional way — and people listen.

Spend any amount of time with David and you’re likely to learn information you had no idea you needed. He has made thoughtful and strategic choices with jobs and affiliations over the years to stay engaged with technology.

David grew up surrounded by radios and technology. There was almost no chance that the inquisitive young man would not grow up to be exactly who he is today.

Case in point: Edwin Howard Armstrong (an American electrical engineer and inventor who developed FM radio and the superheterodyne receiver system) erected an antenna in David’s New Jersey town just across from New York City. David says that iconic antenna helped him to develop an early fascination for technology. That and a vivid memory of being rushed to the hospital in his father the police officer’s radio car, sirens blaring, after a fall. He was fascinated by the voices coming out of the radio console.

“I joke that it took a blow to the head to get me into wireless,” laughs David. He soon asked for walkie talkies that he modified to make more powerful. He would attach wires to chain link fences, trying to make the devices transmit farther, essentially creating a bigger antenna.

The family also had a huge CB radio antenna on top of their home, installed by David’s father and uncle.

“I would typically wind up blowing things up and then have to get them repaired,” he says. His uncle, a ham radio operator, gave David old parts. His parents were convinced he would electrocute himself or burn the house down.

Born on an army base in Albuquerque, New Mexico and originally raised in Northeast New Jersey, David took a non-traditional path from the start. His father was a police officer and his mother worked in bookkeeping.

When his parents split and remarried, he moved to California, gaining several half siblings and a stepfather who was a technologist with the Navy working on communications and sonar systems.

David was an early adopter of computers, including the Radio Shack TRS-80 Radio computer. He would mischievously change the programming of the welcome message on the store model to read “David is awesome,” much to the chagrin of the store manager, who eventually had no option but to hire him.

Fortunately, David had a few teachers that encouraged him to think differently.

Rather than do his math homework, David would program a calculator — via punch cards — to do the work for him, which was significantly harder than just doing the algebra.

David says that his life has been “…a strangely backwards thing.” He served in the U.S. Coast Guard where he learned communications and radar, started a business, and only after that went to college.

Later, David did contract engineering work for a number of companies, but was dissatisfied with the pay. “I kept running up against this notion of, we can't pay you as an engineer because you don't have a degree,” said David. “So at age 30, I finally enrolled in university.” He earned a bachelor of science in electrical and computer engineering from University of California at Davis, with a study emphasis on communications theory and radio frequency and microwave circuit design.

Today, David wears many hats. He is the CEO of Oku Solutions, a company that consults with the wireless telecommunications industry and local governments. He serves as Co-Chair of the Deployment Working Group at IEEE Future Networks, Co-Chair of the Wireless SuperCluster at Global City Teams Challenge (a NIST-hosted project), on the Board of Expert Advisors for the California Emerging Technology Fund. He is a Fellow in the Radio Club of America, a Senior Member of the IEEE, and a Life Member of the IEEE Microwave Theory and Techniques Society. 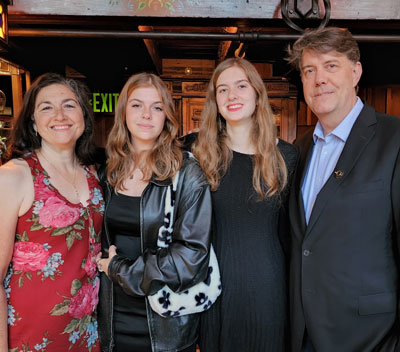 David is also the author of Bridging the Gap : 21st Century Wireless Telecommunications and Economic Impacts to Residential Real Estate from Small Wireless Facilities, both available through Joint Venture.

As executive director of Joint Venture’s Civic Technologies initiative, David works with the civic technologies team to deepen Silicon Valley’s broadband penetration and bring it directly to people in the community. In 2020 they supported the City of East Palo Alto's CBRS + Wi-Fi deployment and spent two years working with the Santa Clara County Office of Education to provide strategic action planning and implementation of broadband networks to underserved communities for distance learning, telehealth, and digital inclusion.

“His level of expertise is staggering and he’s in enormous demand at the national level, but fortunately for us he is focusing his time and talent on Silicon Valley’s issues. What’s more, he does it patiently, always in the spirit of community.”

“The market has told us that they want to be connected and that's the vision of the wireless communications initiative…to see the people of this region to be connected,” says David.

Surprisingly, Silicon Valley is not always on the cutting edge of connectivity for all citizens. The pandemic exposed shortcomings in access for students and a workforce forced to do almost everything online. According to Silicon Valley Indicators, just 24% of low-income households in 2019 had internet access at home. David and the Civic Technologies team worked to fill some of those gaps.

“David is an amazing asset to the Joint Venture team,” says Russell Hancock, CEO of Joint Venture. “But more importantly he is a treasure to the region. His level of expertise is staggering and he’s in enormous demand at the national level, but fortunately for us he is focusing his time and talent on Silicon Valley’s issues. What’s more, he does it patiently, always in the spirit of community.”

Hancock went on to acknowledge David for his ability to convene diverse entities. “It’s not easy getting competing carriers to sit down together, nor is it easy to convene the public entities to come together in a single framework,” said Hancock. “David is able to persuade all the parties to work collaboratively on thorny problems like co-location or model ordinances. They’re willing to do it because they respect David’s expertise, and he’s earned their trust.”

David met his wife, Kim, at a San José ballroom dance club. The friend of a friend, Kim asked David to dance and that was it, he recalls. Kim, of both Persian and Irish decent, was an executive at Bank of America and managed the bank's national compensation program. Today, they have two teenage daughters at home and Kim is involved with volunteer projects and teaches handbag making via community college extension.

What, if anything, scares David about technology? “I came to the stunning realization that most people no longer have backup power on their telephone systems any longer,” he says. “There is a potential that during a crisis, like an earthquake, you won’t be able to dial 911. When the power goes off, your broadband will fail and your phone will fail because your phone goes over broadband.”

Closer to home, David finds himself worrying about the effects of the increasingly remote nature of Silicon Valley. As residents retreat to work in Zoom Towns, our region may lose some of its community and its verve. “That je ne sais quoi simply does not exist over a Zoom call,” says David. “The question is how do we sustain that in an environment where we are all sitting somewhere else?”