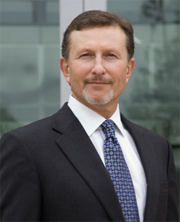 Little did law student Steve Bochner know when he took a summer job at a small Palo Alto law firm in 1980 that it would not only grow into one of the largest, most successful and most prestigious firms of its kind in the world but that he would still be there thirty years later. What’s more, that he would be its CEO.

Bochner was completing his second year at UC Berkeley’s Boalt Hall and contemplating his future when one of his most admired professors, Richard Jennings, a leading scholar in the field of securities regulation, made a suggestion.

“He told me two of his research assistants, Larry Sonsini and Mario  Rosati, were doing some really interesting work in Palo Alto and I might want to look into it,” Bochner recalled the other day in his office on Page Mill Road. “So I went to see them and they hired me for the summer. I loved it. I was hooked. After I finished school the next year they brought me back, and I’m still here.”

Today Bochner, who was just named to Lawdragon's list of the top 500 attorneys in the nation for the second time, is the chief executive officer of Wilson Sonsini Goodrich & Rosati (WSGR), widely recognized as the premier legal advisor to technology and growth enterprises worldwide, as well as the investment banks and venture capital firms that finance them, serving some 300 public and 3000 private clients worldwide.

WSGR specializes in corporate governance, public and private offerings of equity and debt securities, mergers and acquisitions, securities class action, intellectual property and other complex litigation, antitrust and other regulatory practices and a broad range of technology transactions.

When he first arrived, the firm had fewer than thirty attorneys. Bochner now manages a global staff of more than 600 lawyers and some 1300 employees in Palo Alto, San Francisco, Austin, New York, San Diego, Seattle, Washington, D.C. and Shanghai, China.

Since 2004, he has also served on the Joint Venture board of directors, a role he treasures. “As one of the biggest private companies in the region, we have an interest in the vibrancy and success of Silicon Valley,” Bochner says. “We need an organization that brings constituencies together – business, government, education. We need thoughtful policy and solutions developed in a collaborative way.

“Joint Venture is the mouthpiece and the leadership for the region for solving issues together in an organized way. I really admire their effort. They are tackling some very critical issues for the region.”

WSGR co-founder Larry Sonsini added that the firm has always understood the importance of Joint Venture’s role in what he calls “the Silicon Valley recipe” – the cooperation of companies, government, education, infrastructure and entrepreneurs. “All of these constituencies have to work together,” he said. “Failure is not a stigma.”

“Joint Venture is the mouthpiece and the leadership for the region for solving issues together in an organized way. I really admire their effort. They are tackling some very critical issues for the region.”

Though born in Chicago, Bochner grew up in San Jose along with his two brothers, one now a physician in Oregon, and the other also an attorney in Silicon Valley. Their father, Ben, a Polish Holocaust survivor, became an aerospace and nuclear engineer, and their mother, Varda, taught elementary school here.

Bochner attended Pioneer High School and San Jose State University in the 1970s. It was when he was waiting on tables at the Black Kettle restaurant in Campbell while studying for the LSAT that he re-connected with a young woman named Rochelle Couto whom he had known as far back as middle school.

After his first year at Boalt, Steve and Rochelle were married. Last year they celebrated their thirtieth anniversary. The couple has a son, Matt, currently at Central Oregon Community College, and a daughter, Sarah, a senior at Los Altos High School.

“What you see is what you get with Steve,” said Rick Sutherland, a longtime personal friend and the CEO of ClickAway, a computer repair and networking service. “We met over twenty-five years ago when our wives worked at the cosmetics counter at Macy’s. We have children the same age and have been on numerous trips and vacations with them. “His younger years taught him a lot of great values. Even though he’s under pressure, you never see him act out of character. Steve is the most successful unpretentious person I’ve ever met. He’s just a really good guy.”

Between WSGR and his marriage, Bochner clearly values long-term stability in his private life as well as his career, something that’s becoming more of a rarity, especially in today’s turbulent economy. “You can tell I don’t like change very much,” Bochner says with a confident smile. That steadiness has served him and his firm well over three decades of churn in the tech innovation economy.

“His younger years taught him a lot of great values. Even though he’s under pressure, you never see him act out of character. Steve is the most successful unpretentious person I’ve ever met. He’s just a really good guy.”

“Our principles and goals haven’t really changed a lot over time,” he says, noting that when he joined the firm its clients included such companies as Sun, Rolm, Seagate and Quantum. “Then we represented terrific early stage companies and we still do. Now we have clients at all stages of growth, from venture-backed start-up companies to multibillion-dollar global enterprises.” Clients include some of the most recognized names in the technology, retail, life sciences, clean-tech, and venture capital, and other finance sectors.

Bochner became a partner in 1987 and succeeded John Roos as CEO in 2009 when President Obama appointed Roos as U.S. ambassador to Japan. Along the way, Bochner built a successful practice in corporate and securities law, specializing in venture capital, public offering and merger transactions valued in the billions of dollars.

Larry Sonsini said Bochner was the ideal leader to become only the third CEO in the firm’s history. “His passion for what he’s doing and the quality of his character made him a unanimous choice,” said Sonsini. “Steve is very upbeat and has his ego in control, so that makes him very approachable and a good listener. His integrity and ethics are impeccable – his first instinct is always, what is the right thing to do.”

Bochner says the dot com boom of the late 1990s was “chaotic with the number and velocity of IPOs. It was an extraordinary time, a feeding frenzy, if you will. But the public markets have changed dramatically.”

Bochner is encouraged by the resurgence of venture capital investment and IPOs, but says he is “concerned about the lack of liquidity events” in the region. “That’s the key thing to watch in terms of the vibrancy of the valley. Mergers and acquisitions are generally job-reduction events whereas IPOs are a job-creation engine. But now it’s taking eight to nine years on average for a company to reach the approximately $100 million in revenue needed to go public.”

Since 2002, Bochner has been a lecturer on corporate and securities law at Boalt, where he designed and taught the venture capital and IPO law course. He has also lectured at Stanford Law School and been a guest instructor at the Stanford Graduate School of Business and Berkeley’s Haas School of Business.

“Law students today are still idealistic, but much more sophisticated than in my day,” Bochner says. “They are more job-savvy and more aware of the law as a business. And of course they also have a vast amount of information available to them online.”

Bochner has also been a member of the Securities and Exchange Commission’s Advisory Committee on Smaller Public Companies and serves as co-chair of the Nasdaq Listing and Hearing Review Council. He speaks frequently on securities law, has published numerous professional articles and received a number of honors for his work and contributions to the legal profession.

Promoting diversity, a Women’s Initiative Network, philanthropy and community service are all priorities within the firm. WSGR raised $157,000 for victims of the Haiti earthquake in January and last year provided 35,000 hours of pro bono legal work. The WSGR Foundation has donated more than $8.6 million to more than 500 nonprofit organizations.

“We’re proud of our diversity,” says Bochner. “We are, after all, a reflection of the regions where we live and work.”

When he is not in the office, Bochner can often be found relaxing at Lake Tahoe, skiing, playing golf, mountain biking, watching movies or following pro basketball, football and boxing. A vivid red leather boxing glove autographed by former middleweight champ Sugar Ray Leonard sits prominently on the small conference table in his office.

When traveling he is rarely without his Kindle, devouring books on natural history, science, cosmology, oceanography and animals. “Ever since I can remember I loved the ocean and animals,” he says. “I’m really a frustrated marine biologist.”

Just don’t expect Bochner to switch professions anytime soon. Things seem to be working pretty well for him as they are.