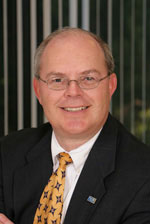 The full scope of the Gulf oil spill tragedy is still beyond measure, but as the containment and recovery continues it has focused fresh attention on the urgent need for renewable energy sources and the technology to create them.

Nearly two years ago, global nanomanufacturing technology leader Applied Materials and Joint Venture saw that need as an important opportunity to collaborate on a regional initiative that they launched formally in early 2009 under the banner of Climate Prosperity.

Fortuitously, Applied already had the ideal executive on its team to play a key role in the management and success of the initiative – Managing Director of Global Community Affairs Mark Walker.

“The progress has been amazing,” Walker told Valley Vision during a recent visit in his office at Applied’s headquarters in Santa Clara. “In a very short period of time, our Climate Prosperity initiative has gone from just one of eight pilot projects in the United States to the leader that everyone else is benchmarking.”

Walker, who joined Applied in 2008 after serving six years as CEO of United Way Silicon Valley and more than two decades with SBC Communications, says Joint Venture has been an important partner in advancing the principle of Climate Prosperity – that protecting the environment can be an economic driver for Silicon Valley.

“Very few organizations in the U.S., let alone in Silicon Valley, have the kind of acumen Joint Venture has for working across sectors, bridging government and business.”

“Very few organizations in the U.S., let alone in Silicon Valley, have the kind of acumen Joint Venture has for working across sectors, bridging government and business,” says Walker. “They have a track record of proven leadership as a change agent. They put a microscope on what we do and that provides accountability and transparency.”

In addition to Climate Prosperity, Walker is responsible for Applied Materials’ corporate social responsibility strategy globally, including philanthropy and employee involvement. He also serves as the chief executive for the Applied Materials Foundation.

“I am fortunate to have inherited a robust, strategic approach to making a positive social contribution when I came here,” says Walker. “The primary focus is on education and closing the achievement gap at the lowest performing schools, where the lowest income children are. We are investing in system change to improve the success rate for those children from pre-K through high school.” 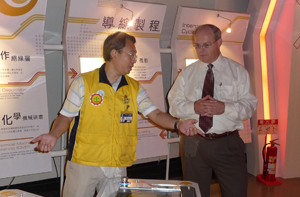 Applied has received numerous awards for its work in education and arts and culture, both in Silicon Valley and Austin, Texas.

One might think Walker’s experience at United Way solidified his commitment to socially conscious work and was the catalyst for his role with Applied, but his passion goes back much further.

“I chose to do community work a long time ago,” says Walker. “It suited my personality. I had a supervisor in my first job with Southwestern Bell who told me, ‘We are all in customer service. Everybody is a customer.’ And she got me involved in Jaycees, the Chamber of Commerce, the United Way and other groups.”

Values of hard work, faith and community service were the norm for many like Walker born in the small southwestern Missouri town of Aurora. His father, Glen, worked in sales and management for the trucking division of the St. Louis-San Francisco Railway, commonly known as the Frisco. His mother, Anna, was a homemaker. The oldest of four children, Mark has a younger sister and two younger brothers.

“We were a very middle class family,” he says. “We moved a lot. I went to grade school in Kansas City, junior high in St. Joseph and high school in Springfield. In St. Joseph, I had two paper routes. My dad would wake me at 4:30 a.m. and take me to my Gazette route and then my mother picked me up after school and took me to my News-Press route. At the end of the month, I went around to collect from everyone. That’s where I learned my first customer service skills.”

In high school, Walker lettered in tennis and baseball and was active in the YMCA and Boys & Girls Club. When it came time for college, Walker opted for Drury University, a small private liberal arts school in Springfield, over larger campuses.

“I wanted to be a bigger fish in a smaller pond,” he says. “I got a scholarship through my church and it was less expensive than the University of Missouri. Plus, Drury had a good business school and a good pre-law program.”

In his senior year at Drury, he became attracted to a young woman he met in student government, Mary Henderson. But she presented a true Missouri dilemma for Walker, a lifelong Protestant and Kansas City Royals fan.

“She was a Catholic and a Cardinals fan, so I had to convert to both,” he says with a wide grin. They were married two years after he graduated in 1979 with dual degrees in business administration and economics.

It was that breadth of experience that United Way Silicon Valley sought when it lured Walker to become its president and chief executive officer in 2002. There he guided the organization to develop a new comprehensive strategic plan and implemented rigorous accountability and transparency policies to help restore financial stability.

“A nonprofit is similar to the corporate sector in that the issues are just as complex,” says Walker, “but at a nonprofit it’s easier to think long term instead of quarter-to-quarter. And the people are certainly in it for the social mission.”

Now back in the private sector, Walker is able to combine his passion for community affairs with the global resources of a multi-billion dollar international company. 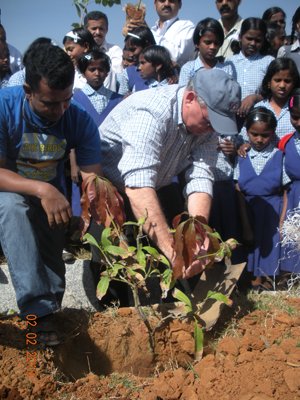 “We are very proud of the heritage and leadership we have from the top down,” said Walker. “It’s really important for us to be leader in our headquarters community here in Silicon Valley as well as on a global scale in our industry.”

Out of the office, Walker enjoys golf, skiing and following the Giants. He and Mary have three children, Andrew, 24 and living in St. Louis, Patrick, 21, a senior at the University of Missouri, and Catherine, 18, headed to her first year at Clark University in Massachusetts this fall.

“I can’t say enough good things about Mark as a father, friend, neighbor and coach,” said Walker’s longtime friend, Ron Hallagan, a partner with Ernst & Young in San Jose. They have coached in Little League together for the past dozen years, play golf often and their families attend the same church. “I love his passion and energy and his ability to keep things in perspective. He’s so level and calm. Let’s say he’s not the fiery one of the two of us.”

Even though he has always traveled a lot on business, Walker says he found time to coach his children in baseball and soccer and enjoys family vacations together. “I tried to spend as much time with them as possible growing up,” Walker said in the wistful tone of an imminent empty nester and a man who recognizes the significance of both personal and community legacies.

It’s the next generation, after all, that will benefit from – or be hurt by – the way we manage renewable energy and climate change, long after the Gulf is cleaned up.