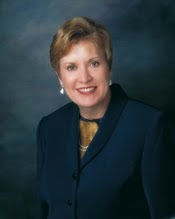 Linda Thor has a confession to make.

“I was bored to death in high school,” says the new chancellor of the Foothill-DeAnza Community College District. “I was a good student, but I did not want to go to college.”

At the time, Thor thought she would have been just as happy keeping her summer job tallying bus ticket receipts in the accounting office at the Los Angeles Greyhound depot.

“It was a union job, and as an 18-year-old I thought I was making a fortune,” Thor recalled the other day. “At the end of the summer, I didn’t want to leave.”

“But my mother, who had a huge influence on my life, made me a deal. She said if I went to college for one year and absolutely hated it, I could drop out and she would never bring it up again. So I went – and I have been going back every day of my life since.”

Indeed, Thor found her passion for higher learning at Pepperdine University and turned it into a lifelong, successful and meaningful career as the president of two community colleges and now as a district chancellor.

Last February, Thor left her twenty-year presidency at Rio Salado College in Arizona for the Foothill-DeAnza post when longtime chancellor Martha Kanter departed to become Assistant Secretary of Education in the Obama Administration.

“One trustee recently commented, ’You have big shoes to fill,’” Thor said. “But based on my early performance, she added, ‘fortunately, you have big feet.’ I think it was compliment,” she says with a hearty laugh.

“We are extremely impressed with her leadership skills, high energy and commitment to students,” said Bruce Swenson, president of the Foothill-DeAnza district board of trustees. “People warm up to her immediately and want to work with her.”

“We are extremely impressed with her leadership skills, high energy and commitment to students,” said Bruce Swenson, president of the Foothill-DeAnza district board of trustees. “People warm up to her immediately and want to work with her.”

“She is working hard,” Swenson added, “not only during regular business hours but after hours, helping to get our message out about the parcel tax before the voters in November.”

Having spent her entire career in Southern California and Arizona, Thor said that among her early priorities here was to network and get connected to key Silicon Valley leaders and organizations.

“One of the things Martha Kanter recommended to me was to get on the board of Joint Venture: Silicon Valley Network,” says Thor. After a meeting with Joint Venture CEO Russell Hancock, Thor joined the board in June. “I had developed a list of people in the region I needed to meet,” Thor says. “The Joint Venture board is so impressive that I met four or five of them at my first meeting.”

Working closely with government agencies, employers and other organizations involved in public-private partnerships is vital to a community college district, Thor noted.

“We have a saying at the district that community is our middle name,” she explains. “We have to interact with the community. We need to be participating in the dialogue, and Joint Venture helps make that possible.”

“We have a saying at the district that community is our middle name,” she explains. “We have to interact with the community. We need to be participating in the dialogue, and Joint Venture helps make that possible.”

Six months into the role, Thor says her top priorities are working to win passage of the parcel tax measure that would bring the cash-strapped district $6.9 million a year for the next six years, upgrading instructional and administrative technology reflective of Silicon Valley’s lead in high tech, and improving student success rates.

“Linda is the perfect chancellor – smart, fast, visionary – exactly what we need right now,” said Foothill College president Judy Miner. “In spite of all the economic challenges we have, she is undaunted by that. She has a very contagious kind of energy. She’s got strong interpersonal skills that serve her well as she envisions another level we can reach as a district.”

Meanwhile, the move from the summer heat of Phoenix to the temperate climate here has been an adjustment for Thor and her husband.

“I’ve been cold,” Thor admits, our region’s recent below-average temperatures notwithstanding. “Our place in Menlo Park is on three levels and the other night we were watching a movie on the bottom level, which is the coolest part of the house. I’m a bit embarrassed to say that at one point I had to turn the fireplace on.”

Born in Los Angeles, Thor and her older brother, Adrian, grew up in a working class household in Monterey Park. Their father, Karl Thor, was a Swedish immigrant who became a Los Angeles police detective and their mother, Mildred, “was a stereotypical 1950s housewife but a community activist who was involved in campaigns, clubs, social issues and the like,” says Thor.

Mildred later worked as a reporter covering community news for the Monterey Park Progress, a role that inspired Linda to work on her high school newspaper and to major in journalism at Pepperdine.

It was also around that time that she met her future husband, Robert Huntsinger, in a management class. “I was the only woman in the class!  He couldn’t miss me!” she recalls with a chuckle. They are soon to celebrate their thirty-sixth wedding anniversary.

From there she became a public information officer for the Los Angeles Community College District, where she would remain for sixteen years, rising through a succession of senior management positions that ultimately led to her becoming president of West Los Angeles College in 1986.

“I became a college president at 36, the youngest of 107 college presidents in California at the time, and only twelve were women,” says Thor, her expression revealing the pride of breaking through the glass ceiling for women in higher education administration.

During her four years at West Los Angeles College in Culver City, Thor presided over a 48 percent increase in enrollment, a new facilities master plan and major new programs.

In 1990, Thor uprooted her family and left her native LA behind for the opportunity to head Rio Salado College in Tempe, Arizona, one of ten colleges that comprise the Maricopa Community Colleges in greater Phoenix.

For the next two decades, she built Rio Salado into a “college without walls” that now serves 48,000 credit and 12,000 non-credit students annually – a 252 percent increase in full-time enrollment during her tenure. It specializes in serving working adults through distance learning, customized degrees with corporations and government, and such accelerated programs as dual enrollment for qualified high school students.

Rio Salado attracted national attention for many of its progressive programs and received the Arizona Governor’s Award for Quality/1993 Pioneer. “That was a turning point for the college and its employees,” Thor recalls. “It truly validated their work and dedication.”

Thor’s nine-page résumé details a long and active career in academia. Her leadership in LA and Phoenix, including participation on boards, committees and councils with scores of academic, business, women’s and community organizations, earned her numerous awards and honors in both communities.

She has published dozens of articles and speaks frequently on education, women’s leadership, technology, distance learning and related topics around the country.

She points with pride to having and raising two children, one born after she became a college president, and that both of them are pursuing careers in education. Son Erik, now 29, is on the economics faculty at Estrella Mountain Community College in Phoenix. Daughter Marie, 23, is currently earning her master’s degree in sociology at Arizona State University in preparation for a teaching career.

“That they both received a good education and are committed to careers in community colleges is very validating for me, both as a professional and as a mother,” says Thor.

With such a full schedule, how does Thor find time to unwind?

She and her husband, now retired from the Social Security Administration, love to travel as often as possible. They have visited dozens of countries in Europe, the Caribbean, and South America and seen much of the U.S., Canada and Mexico.

She also has discovered an effective way to disengage from the pressures and demands of long days at the office – computer games. At the moment, her favorite is “Bejeweled Blitz,” a gem-swapping puzzle game on Facebook.

“It’s a wonderful way to shut down from rehashing the day in my mind before bed,” says Thor. “I have always enjoyed games and puzzles. The way they force you to concentrate on them means you can’t think about work or other problems.”

She also loves to rent musical films on Netflix – “Cabaret,” “Fiddler on the Roof” and “Mary Poppins” are among her favorites – and enjoys good fiction, especially the works of her favorite author, John Grisham.

In the end, though, her overriding passion is the love of learning and imparting that to students, faculty and administrators.

For that, she owes a debt of gratitude not only to her mother but also to her women co-workers back at the Greyhound station.

“When that summer ended and I told them I wanted to keep working instead of going to college,” Thor says, “they all gathered around me and told me that if I had the chance to go to college, I absolutely had to take it.”

And the rest is history. And science. And philosophy, and math, and literature, and language, and humanities, and...