As a lanky power forward for the San Jose State Spartans basketball team back in the day, Leon Beauchman learned to adapt to rapid changes on the court, anticipate his teammates’ and opponents’ moves, and get into position quickly.

That sure has come in handy for the engaging 6-foot, 6-inch Beauchman in his current role as area manager of external affairs for AT&T, where he has spent the past twenty-five years with the company in marketing, advertising and government and community relations.

Asked how AT&T perceives itself in today’s fast break, high-speed communications environment, Beauchman readily acknowledges that keeping up is a tall order.

“Everything we are doing now is structured around this dramatic shift and the transformational issues it brings. We’re trying not only to meet customer needs but to build the organizational infrastructure to meet the rapidly evolving demands of the business.”

The project is a collaborative effort by the wireless industry, cities, businesses and residents working to improve the wireless infrastructure in Silicon Valley and eliminate dead spots. The consortium builds on existing relationships with municipal governments to lead a coordinated public-private sector effort.

“My role with AT&T is to connect the company with community organizations, cities, and state and federal government,” Beauchman says. “The wireless initiative is one of the best ways to do that. Joint Venture is able to bring everyone to the table, especially the local governments. It’s a critical role. I’m not sure who else could play that role for us.”

“Joint Venture is able to bring everyone to the table, especially the local governments. It’s a critical role. I’m not sure who else could play that role for us.”

Beauchman was active with an earlier Joint Venture wireless initiative that focused primarily on cell phone coverage in Silicon Valley. “Now the issue is capacity, particularly on smart phones,” he says. “People want access all the time, not just for phone calls and texting but for the internet and email.”

Beauchman has been with AT&T long enough that when he joined it was called Pacific Bell. Then, its focus was chiefly on landlines and handsets, before the advent of the Internet, which he calls the “perfect storm” that created the current communications landscape and flattened the world. “Today AT&T is the spinal cord that makes global communication a reality.”

“Leon is a tireless champion for his community,” said George Granger, executive director of community affairs for AT&T. “His leadership skills and ability to bring about positive results are well known and respected throughout the community. Leon also has a passion for ensuring that students throughout Santa Clara County receive a high-quality education that prepares them for success in the future.”

“Leon is a tireless champion for his community, His leadership skills and ability to bring about positive results are well known and respected throughout the community.”

Beauchman learned some of his passion in his native Meridian, Mississippi, where his mother, Marie, a middle school English and music teacher, raised Leon and his two sisters, Angela and Dyan in the early 1950s.

“It was the second largest city in Mississippi,” Beauchman recalls, “but it was really a small town environment. Of course, there was still segregation at the time, but I always felt that it gave you a sense of who you are.”

When Leon was ten, the family moved to Los Angeles for more opportunities in education – both for his mother to teach as well as for the children to learn. When it came time for high school, Leon had grown taller and become a promising basketball player, so he was recruited to play for Junipero Serra High School in Gardena.

“It was a great growth experience for me,” he says, “but at the time there seemed to be as much segregation in L.A. as in Mississippi. My first school was ninety-eight percent African American and Serra had maybe ten in the whole school.”

Over his years at Serra, college scouts took note of Beauchman’s talents, and San Jose State was among those that came knocking when he graduated in 1969. “I hadn’t even thought of San Jose,” he says. “All I knew about it was that Dionne Warwick song.” Still, the slower pace in Northern California intrigued him. “It was a better fit for me and I learned to like it.”

Beauchman graduated with dual degrees in business administration and economics, then remained at SJSU to earn his MBA, which by then held more promise for him than the NBA.

His first job out of school was in sales with Merrill Lynch, but after two years, Beauchman realized it was not the career for him. At about the same time, though, he found another part of his future in Nejleh Abed, a young dental student from New York whom he met at The Parlor in San Jose. She ultimately became his wife in 1981, and today is a practicing dentist in San Jose and the mother of their three sons.

In 1977, Beauchman enlisted in the Peace Corps, serving for one year in Ghana, West Africa, where he worked on various U.S. aid projects with local farmers.

“It was immersion in a totally different culture,” he says. “I was the only American there. The communications were poor and sometimes there was no electricity.”

When he returned home, Beauchman found a new niche in advertising, working for marketing agencies in San Francisco before joining the advertising group at GTE Sprint, which led to a position with Pacific Bell in 1986. He spent twelve years in advertising before moving into external affairs, where he found a home and a passion for community relations and education.

In addition to his AT&T role, Beauchman has become a strong advocate for education. He has served on the Santa Clara County Board of Education for the past twelve years, and previously on the Campbell Unified School District Board of Trustees. He is also president of the Santa Clara County Alliance of Black Educators and has worked on educational initiatives for Joint Venture and the Silicon Valley Leadership Group.

Leon is extraordinarily thoughtful and purposeful in all that he does,” said Colleen Wilcox, former Santa Clara County superintendent of schools and executive director of Joint Venture’s Alliance for Teaching. “He engenders trust and builds consensus. I have always thoroughly enjoyed working with him.”

Beauchman has served on a number of other community boards and committees and has received numerous honors for his community work.

He and Nejleh have three sons – Naseem, a graduate of the Yale University School of Medicine currently doing his residency at Howard University; Jihad, a recent graduate of Harvard Law School working in Washington, D.C.; and Jalal, a senior at San Jose State and a wide receiver on the Spartans football team. 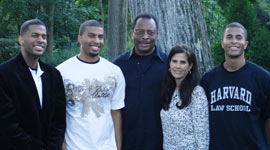 “My family is the most important thing to me,” Beauchman says. “We are all very close, and I treasure how my sons carry themselves, how they interact with people and how they treat others.”

He and Nejleh have recently been able to combine their interests in travel, golf, reading and Spartans football by following Jalal on road games this season. This month they traveled to Tuscaloosa, Alabama, Madison, Wisconsin and Salt Lake City.

“We bring our golf clubs and a good book and make a long weekend out of it,” he says.