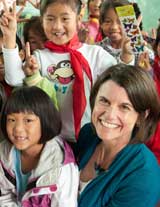 Growing up in King City, Kelly Kline learned at a young age that she had a more altruistic outlook than most in the small Salinas Valley town.

Blame it on the pigs.

“I raised pigs in the local 4-H Club,” she recalls wistfully. “I had four of them – Pandora, Irma, Gladys and Gunther. They were so wonderful and smart. I just didn’t do very well with the idea of their imminent demise. So I was probably the only vegetarian in town. I was always a bit of a misfit.”

A meatier world called to her, in a manner of speaking. In high school, Kline worked at the local, and aptly named, True Value hardware store. “I did everything there – cutting pipe, counting screws, unloading trucks, accounts receivable. I can identify every part under your kitchen sink. That job gave me a passion for, and a love of, the small business community.”

“Silicon Valley EDA is unique in the nation.”

“Silicon Valley EDA is unique in the nation,” she says. “There are some similar organizations, but nothing exactly like ours. The member cities have distinct individual goals, but we know we need to use our collective efforts to compete against other tech regions. It’s unprecedented. There is more to be gained by working together.”

“Most of us (in economic development) are just one person doing this job in a city,” Kline notes. “We really need the network. It’s a friendly sort of competition, but we’re not going to poach each others’ businesses.”

On an Election Day visit with Valley Vision, Kline admitted to “a lot of trepidation” about the fate of Proposition 22, the ballot initiative to protect local funds from state incursion. Despite its relative affluence, Cupertino faces the same economic challenges as most other communities in the struggling economy.

“If Prop. 22 fails, local communities are in a world of hurt,” she said. As it turned out, the measure won with an overwhelming 61 percent of the vote.

Kline came to her career, however, by way of a detour through journalism. Born to high school civics teacher Ken Kline and his wife, Marilee, a part-time bookkeeper, Kelly went to San Jose State University as a broadcast journalism major with aspirations of anchoring network news.

“It was a high school teacher, Mr. Arnett, who really opened my eyes to the idea of journalism and the great big world beyond King City. I had watched “Crossfire” with my dad, and I love to write. So that was my major, even though I didn’t have a TV set at San Jose State.”

“Kelly was so outgoing and friendly and hard-working,” says Margaret Tamisiea, a college dorm-mate who became her best friend. “She would get up at 4 a.m. for her internship at KNTV and then go to classes.”

Now in community relations at Adobe, Tamisiea and Kline worked together in San Jose City Council member David Pandori’s office in the early 1990s. Today they live a block apart, share many friends and spend time together away from work skiing, in a book club and other activities.

“I like Kelly because she is genuine and supportive, and always curious about life,” said Tamisiea.

Upon graduation with dual degrees in journalism and political science, Kline applied for and received an internship at CNN in Washington, D.C., where she worked as a research assistant and writer on, of all things, “Crossfire.”

“It was my dream job. I arrived one week before the first Gulf War began, when CNN was emerging as a major cable news source. But I soon realized I was a little cog in a big wheel, and that didn’t excite me at all. It turned out I wanted to be on the other side of the camera, and I really loved being part of a small community.”

Kline also found another love in Washington – a Reuters photographer named Chris Ayers, who was waiting tables at the same Pizzeria Uno where they both worked to make ends meet. When David Pandori asked Kline to join his staff in 1992, she returned to Silicon Valley with Ayers in tow. The two were married in 1998.

With Pandori, Kline founded the Kids Voting Silicon Valley project and worked on a wide variety of other initiatives and events from 1992 to 1998.

That experience led to a subsequent post with the San Jose Redevelopment Agency, where she became Downtown Manager and successfully piloted a number of economic development projects over a seven-year span.

“Kelly is fantastic to work with,” said Jim Schutz, a longtime colleague and friend who was manager of planning and development for the downtown management division of the agency. “She has high energy, is bright and sunny, smart and funny. She has a positive attitude and never lets things get her down.”

“She has high energy, is bright and sunny, smart and funny. She has a positive attitude and never lets things get her down.”

“She is super focused on whatever she’s trying to accomplish, whether she’s in the office or at home,” added Schutz, now the interim San Rafael City Manager. “Because she’s Kelly, she can’t just jog, she has to run marathons. When we hike Mt. Tamalpais, she takes the most direct, steepest route. I guess that’s a good metaphor for who she is.”

Kline moved into her present role in Cupertino three years ago. “I found my niche helping businesses to thrive,” she says. “It’s about two things – attraction and retention. I want to cultivate new businesses and keep them here.”

Kline earned her master’s degree in public administration from San Jose State in 2007 and last year completed the Senior Executives in State and Local Government Program at the Harvard University Kennedy School of Government.

In addition to chairing Silicon Valley EDA, she is active in a number of professional, civic and community organizations.

She also makes time to run up to thirty miles a week, often with the Tattersols, a Peninsula women’s running team whose members range in age from 20 to 70. “I started running at San Jose State,” she says. “I’ve run six marathons now. Running helps me leave everything behind. I don’t listen to music, just the natural sounds outdoors. I love the sheer joy of it.”

More important than anything else to Kline and her husband is their 6 ½- year-old daughter, Helen, who they adopted and brought home from China’s Hubei Province in 2005.

“We are inseparable,” says Kline. “We do everything and go everywhere together. Our family is all for one, one for all.”

They recently returned to China this summer with the Cupertino Rotary. “It was a great trip and a meaningful experience for my family,” she says.

“We visited specific projects that were funded through the work of the International Committee, with the Shin Shin Educational Foundation, and with Half the Sky Foundation. These organizations work to improve rural schools, and orphanages, respectively. We also did a wheelchair distribution in partnership with the Wheelchair Foundation.”

In the end, maybe raising those pigs had a positive outcome for Kline after all. Given the way her life turned out, she could have written the 4-H Club oath:

I pledge my head to clearer thinking,
my heart to greater loyalty,
my hands to larger service
and my health to better living,
for my club, my community, my country, and my world.