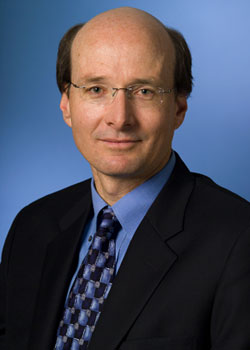 Mark Bauhaus could be forgiven for running a few minutes late for his visit with Valley Vision. He was in the throes of directing Juniper’s response to the recent major RSA security breach, an unprecedented event in his industry.

“We’re also a network security company, after all,” he said by way of an apology where none was needed. “This is major. It affects millions of people.”

For a senior executive in a $4 billion company with the weight of global network security issues on his shoulders, however, Bauhaus seemed remarkably unruffled. It’s among the qualities that endear him to his colleagues at Juniper and Joint Venture.

“Mark has always been a very level-headed guy,” said John J. Lucas, Juniper’s senior director of global real estate and workplace services. “He can look at complicated issues and boil them down to the essentials. And he has a nice way of dealing with what sometimes can be difficult or competing interests.”

Not surprisingly, Bauhaus cites the same qualities that drew him to Joint Venture and its climate prosperity work in the region.

Bauhaus, who has been at Juniper since 2007 following twenty years with Sun Microsystems, was elected to the Joint Venture board last year and has been active on the Climate Prosperity Council and as the board champion for the Moffett Park Community Smart Grid Project. Moffett Park is the business development in Sunnyvale where Juniper is located and is currently expanding its campus.

“Mark has played a vital role in moving the project to reality,” said Kelly Krpata, director of the Applied Materials Climate Prosperity Initiative for Joint Venture. “Projects as grand as this need a business model to succeed and Mark has provided invaluable guidance in that area.”

“Silicon Valley is viewed a bit like Camelot, a special place,” Bauhaus says. “People are attracted to that and we want to make sure that our buildings are sustainable, LEED-certified and energy efficient. So the smart grid at Moffett Park is a natural project for us.”

Bauhaus’ lineage may not quite harken back to King Arthur’s time, but he is a fifth generation Californian from a line of pioneers, Gold Rush prospectors and even a state supreme court justice.

Mark and his younger brother, Dan, were born to Richard and Peggy Bauhaus, both Stanford graduates in the 1950s. Raised in Palo Alto, the family moved to Santa Rosa when Hewlett-Packard relocated their father, an early HP engineer, to Sonoma County.

At Montgomery High School in Santa Rosa, Mark’s entrepreneurial traits emerged in an unusual way. He eschewed the typical teenager jobs for running his own, well, food enterprise.

“We had rabbits and chickens and goats, so I started my own rabbit meat business,” he said as if he were talking about a corner lemonade stand. “I slaughtered them and packaged the meat and sold them. I also sold bait worms and goat’s milk.”

When it came time for college, Mark found his ideal school close to home, enrolling at the University of California at Davis. What appealed to him there was not so much the academic curriculum as the opportunity to create his own degree program.

At Davis, Mark created a dual major for himself, graduating in business management and environmental systems analysis in 1985. While at Davis, Mark also married Caroline Blair, whom he’d met in high school. After graduation, Mark joined HP as an environmental engineer.

“He can look at complicated issues and boil them down to the essentials. And he has a nice way of dealing with what sometimes can be difficult or competing interests.”

Indulging their travel muse after college, Mark and Caroline spent the next year on a global “walkabout,” visiting Asia, China, Japan, Eastern Europe and Southeast Asia, including Thailand, Malaysia, Burma and Nepal.

“It was a great experience,” Bauhaus recalls. “It’s the only way to get a much deeper view of other countries and cultures.”

Following a year of consulting, Juniper brought Bauhaus aboard as executive vice president and general manager of its service layer technology business group. In his current role he is responsible for the company’s software business in security, network features for end devices, emerging enterprise network services portfolio, developer SDK platform and the Juniper Developer Network.

Mark and Caroline live on the Peninsula with their two daughters, Kayla, 17, and Analisa, 14. Kayla, who interned at Joint Venture last summer, is headed to Middlebury College in Vermont this fall.

When leisure time permits, Mark loves any type of outdoors activity, including biking, running, hiking, backpacking and skiing. And then there is the atypical vacation. 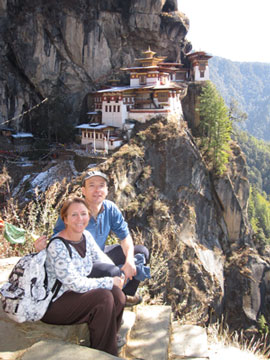 In December 2009, the family went to Bhutan, where the concept of “Gross National Happiness” is a celebrated value based on the belief that whatever work they do, whatever goals they have – and no matter how those may change in a changing world – ultimately without peace, security and happiness they have nothing.

“We went with our two daughters and my mother and step-father,” Mark said. “We wanted an in-depth experience of the culture and people and country who would make a goal of ‘gross national happiness’ instead of simply GDP.

“We devised experiences up front to tour while engaging with people around our various skills: teaching a workshop in inter-cultural management, hosting a workshop for internationally minded teenagers, discussing healthcare policy with government officials, meeting the IT minister about how network technology will affect development.”

“So the experience became part travel vacation and part education for us, and part offering some kind of knowledge to people we met. It was fascinating.”

For Bauhaus, all of his experiences are created to nurture his passion for connectivity.

“Connectivity is the world’s imperative for me,” he says. “How are things connected? My head was always full of thoughts about how to make connections and create feedback loops – between people, between organizations, between projects.”

With that, he politely excused himself to get back to work connecting the people and resources at Juniper to manage the RSA breach.