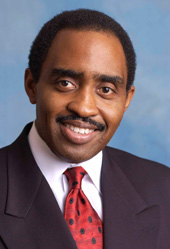 It wasn’t so much the bullet crashing through the front window of his family’s apartment on the South Side of Chicago, or even the youth who collapsed on their porch bleeding from a gunshot wound, that left the most lasting impression on 8-year-old Emmett Carson.

It was what happened next that fundamentally altered the course of his life, that shaped his guiding values, that has been his underlying philosophy ever since. And that has made him one of the most successful and internationally respected philanthropic leaders today.

That, Carson says, was his first lesson in “fairness of opportunity.”

“We lived in a poor neighborhood,” Carson recalled during a recent visit in his office in Mountain View, surrounded by some of his favorite artworks, mementoes and awards, including a 100-year-old African king walking stick and a bronze sculpture of a man climbing a rope up one wall. “We knew we had to move.”

Carson’s father, Emmett, was a business inspector for the city and his mother, Mary, was the head cook in the Chicago public school system. They lived modestly with their only son.

“They did not go to college, but they had the right values,” says Carson, “and somehow they mustered the wherewithal for us to move. So we moved to Chatham Village, about thirty blocks further south.

“My life changed overnight!” Carson exclaimed, eyes widening, voice rising. “Suddenly there was no violence anymore. I could ride my bike again, go to the candy store, play outside with friends. I got saved!

“Yet it seemed so unfair to me, unfair that we could move when others could not, that we had that choice. It haunts me to this day. Everything that happens to us is about the fairness of opportunity.”

Today Carson is the founding CEO and president of Silicon Valley Community Foundation, which has more than $2 billion under management, and is a member of the Joint Venture board of directors.

The foundation shares a special partnership with Joint Venture, both as a funding channel for vital initiatives and as presenting sponsor of the annual State of the Valley conference and the Special Analysis section of the annual Silicon Valley Index.

“At heart I’m a scholar, which means I seek out good information and good data to make decisions,” Carson says. “And I am an economist by training, which by definition means we have to match limited resources with unlimited needs.

“When I came here from Minnesota five years ago to merge the Peninsula Community Foundation and the Community Foundation Silicon Valley, I knew the first thing we needed was to develop good data about our community. Joint Venture was by far the premier institution developing that data.”

“When I came here from Minnesota five years ago to merge the Peninsula Community Foundation and the Community Foundation Silicon Valley, I knew the first thing we needed was to develop good data about our community. Joint Venture was by far the premier institution developing that data.”

Carson met Joint Venture CEO Russell Hancock and the two became fast friends and allies. “Both organizations share an affinity for accuracy and community engagement around the data,” Carson says.

“The result of that data is that it fulfills our mission statement – building civic engagement. The lack of community engagement is a big obstacle. People get in a bubble and don’t look around. But bringing people together is our outcome. It’s the grist of what we do – getting people to talk about this place.”

“Russ and I have developed a genuine friendship. We are so intertwined on this that we’re like Frick and Frack,” he added, a reference to a famous pair of 1940s Swiss ice skaters whose names became synonymous with inseparability.

“Emmett is so many things,” says Hancock. “He’s very executive, of course, but he’s also part preacher and part scholar, and that’s why he’s so successful in his role. Really you want the chief of a community foundation to have the compassion of your minister, the logic of Spock, the evangelical fervor of a Martin Luther King, and the managerial savvy of Lee Iacocca. Emmett is all of those people wrapped into one!”

Calling himself an “average student” at Emil G. Hirsch high school in Chicago – “77400 South Ingleside!” he recites the address proudly from memory – Carson pointed to another example of serendipitous fortune that altered his future.

“I was attracted to a girl whose mother would only allow her to go to the library. So of course I started spending a lot of time at the library. And guess what? My grades went through the roof!”

The next thing he knew, a counselor re-assigned him from the mainstream students to “the nerds” – the high achievement students taking AP courses. “Suddenly we’re talking about college, about success. Again, my life went in a positive direction because of that opportunity.”

Carson landed a full scholarship to Morehouse College, a small, private, all male, predominantly black college in Atlanta whose alumni include Martin Luther King Jr. and many African-American titans of business, industry and entertainment.

A pre-law major at first, Carson ultimately changed to economics, realizing he would need business skills to pay for graduate school. He earned his bachelor’s degree in economics, Phi Beta Kappa, in three and a half years, which included an internship at the Federal Reserve Bank of Atlanta.

“Emmett has a strong desire to make changes and problem-solve. He is not ever satisfied with ‘can’t be done.’”

Then Princeton came calling with another full scholarship. He was the first graduate student in Princeton history to be admitted mid-year, and he found himself in a vastly different environment than what he’d known previously.

“My world turned upside down,” Carson says. “For the first time I had white classmates. It was a topsy-turvy experience for me. It established the framework for me to understand different cultures.”

He became immersed in issues and organizations focused on race, diversity, equality and inclusiveness, establishing campus groups, conferences and workshops. “I wanted to use the black leadership skills I learned at Morehouse to help change inequities.”

Carson was just the second African-American to complete Princeton’s Woodrow Wilson School of Public and International Affairs doctoral program, where he earned his master’s and doctorate in four and a half years.

“We became friends and we argued about everything,” recalled his Princeton classmate Jenice View, now an education professor at George Mason University. “He has a lot of intellectual curiosity. He likes to provoke. One of our debates turned into a four-day conference on the future of affirmative action. 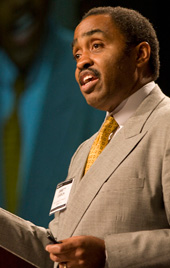 “Emmett has a strong desire to make changes and problem-solve,” she added. “He is not ever satisfied with ‘can’t be done.’”

In his early career, Carson was a social legislation analyst for the Library of Congress, taught Afro-American Studies at the University of Maryland and conducted a study on black philanthropy for the Joint Center for Political and Economic Studies in Washington, D.C.

In 1989, Carson joined the Ford Foundation in New York, where he spent five years as a program officer managing international and U.S. grant making programs that took him to Africa, Asia and Latin America.

While at the Ford Foundation he met his future wife, Dr. Jacqueline Copeland, a vice president of the Philadelphia Foundation with two undergraduate degrees from Georgetown, and two master’s degrees and a Ph.D. in philosophy from the University of Pennsylvania.

“We met in Texas, had our first date in Mississippi and announced our engagement in New Orleans,” said Carson, who later headed the Louisiana Disaster Recovery Foundation, established after Hurricanes Katrina and Rita ravaged the state.

The couple married in 1995. Among all the items on display in his office, a four-inch crystal cube with his and Jackie’s images etched deep inside is Carson’s favorite.

They have one daughter, Yetunde, a Nigerian name in the Yoruba language meaning, “The great mother has returned.” She is a junior at Beloit College and will be interning at the Smithsonian this summer in pursuit of a career in the art and museum service, said Carson.

In 1994, Carson became the president and CEO of the Minneapolis Foundation, one of the oldest and largest community foundations in the United States. During his tenure, the foundation increased its total assets under management from $186 million to $655 million, gaining national recognition.

When officials were looking for a new chief executive to oversee the merger of the Bay Area’s two largest foundations, Carson’s name rose to the top.

“It was an extremely difficult decision for us to make the move,” he says. “We were happy in Minneapolis, my wife was happy there, our daughter was a junior in high school. And a lot of people, our friends and colleagues, told me not to go.

“In the end, I’m a student of philanthropy. I believed that this era philanthropy will be shaped by what happens in Silicon Valley. If we could pull it off, this would be the most influential community foundation in the U.S. So we packed everyone up, including my mother, and came out here.”

“I think we have been able to create something magical, and I’m really proud of that,” Carson says.

Along the way he has given his time to dozens of organizations, served on numerous boards and committees, published scores of books, papers, monographs and articles, and received many awards and honors for his work.

“Emmett is one of the most visionary and courageous thought leaders in this sector,” said Steve Gunderson, president and CEO of the Council on Foundations. “He studies philanthropy very diligently. He understands, perceives and identifies trends often before others recognize them.

“I like Emmett because we both love intellectual conversations. At times I am more political because it’s my nature and my job, where he is more precise because it’s, well, it’s the way he’s made.”

Which brings us back to the “fairness of opportunity” dilemma that made him, haunts him and drives him all at the same time.

It’s what took Carson from a violence-prone neighborhood to a safer one, from an average-student group to an advanced one, from little hope for higher education to acceptance at a prominent university, from a financially unattainable graduate school to a full ride at Princeton, from Washington to Maryland to New York to Minneapolis to Silicon Valley.

All he had to do was move the first thirty blocks.