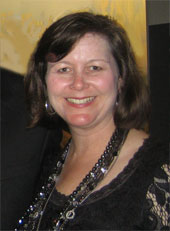 It was in the spring of 2001 that Jennifer Seguin finally decided she’d been in denial to herself and others for too long. It was time she owned up to her real identity.

“After fifteen years in the private sector, I woke up one day and it hit me,” she confessed in a recent visit with Valley Vision. “I had always been a closet environmentalist. It more closely aligned with my personal passion.”

You might say what Seguin saw when the sun rose that morning was the promise in the potential of solar energy. That’s when she changed her career direction away from high-tech sales, marketing, analysis, and industrial engineering and toward environmental programs and services.

“Jennifer is a great resource for me, somebody I can go to for answers to my questions. We’re both very busy constantly juggling tasks and projects, and she’s amazing at that.”

Today, Seguin is the manager of the Business & Civic Waste Management Team for San Jose’s Environmental Service Department, a department of 500 employees who operate essential citywide and regional utilities such as wastewater treatment, garbage and recycling collection, and water supply, and – in doing so – help to implement the city’s landmark Green Vision policy.

She is a key player in the process to select contractors and services for the re-designed commercial garbage and recycling system that will help achieve San Jose’s Green Vision and Zero Waste goals. Other responsibilities include the nationally award winning Go Green Schools Program, establishment of recycling and composting programs for the new airport terminal and enhancing economic development and green job creation.

“Local government is where so much of the action is happening,” Seguin says. “San Jose is a city that’s out there, with sleeves rolled up, really doing it and getting it right.”

“She’s got a lot of expertise, definitely one of the most competent people in our department,” said Emy Mendoza, a colleague in Environmental Services working on the Zero Waste program for the city. “Jennifer is a great resource for me, somebody I can go to for answers to my questions. We’re both very busy constantly juggling tasks and projects, and she’s amazing at that.”

“The public sector task force is a perfect fit for me,” Seguin says. “I’ve come to appreciate it as a forum for raising issues that affect us all regionally.”

“The public sector task force is a perfect fit for me,” Seguin says. “I’ve come to appreciate it as a forum for raising issues that affect us all regionally.”

“Air doesn’t stop at the city limits. We need to share ideas and solutions on a regional level. Joint Venture is essential to that. With Joint Venture you get the whole pie, not a polarized effort.”

That might seem like altruistic talk for an Oklahoma native, but Seguin’s father, architect Rex Morton, moved the family – including her mother, Margaret, and brother, David – to San Jose when she was three to pursue a business partnership and never looked back.

Seguin’s mother was a stay-at-home mom and frequently volunteered in community projects, Seguin said, and both parents were active community volunteers.

Seguin was her 1982 class valedictorian at Pioneer High School, where she excelled in math and science, which led her to Cal Poly San Luis Obispo to study mechanical and industrial engineering.

After early jobs with Rolm, IBM and the Washington International Trade Association, Seguin went to graduate school at The American University in Washington, D.C., earning her master’s degree in International Communication in 1993.

She continued her career with the U.S. Department of Commerce as a program analyst and international trade specialist before landing at Silicon Graphics as a market development manager. 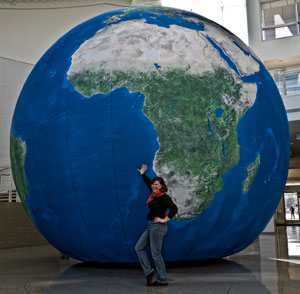 It was in that role in 1997 that she attended the annual Autofact Conference in Detroit, where she met her husband, Ralph, a software developer, also from San Jose.

“I remember stopping by our booth to ensure his demonstration was working, and walking away in a hurry heading for my next appointment. He said, ‘Hey, wait a minute…’”

The couple married in 2000. Ralph works at Lockheed Martin’s solar and astrophysics lab and they have a son, Matthew, 7, and 5-year-old twins, Natalie and Steven.

After three years with Silicon Graphics, Seguin joined International Data Corporation in Mountain View. She was a consulting sales manager there when her epiphany struck about pursuing an environmental career.

“I had a strong influence from my grandmother,” Seguin says. “She was always a proponent of recycling and composting. She would bring her own bag to the grocery store. I grew up with an appreciation for those things.”

Within a few months, she landed her first job with San Jose, a double role as a grant coordinator for the Bay Area Solar Consortium and as the city’s Green Building Program education and outreach coordinator. She also taught a solar design course at San Jose State University in partnership with another professor in Spring 2002.

After that, Seguin spent a year as an energy analyst with the First Community Housing Corporation, a year managing the contract with the city’s residential garbage hauler and a year working with San Jose’s LEED-EB green building consultant to certify City Hall as the first LEED-EB Platinum municipal building in the country.

In 2008, she rose to her current position to supervise the Green Building and Climate Action team, provide support to city departments and support for achieving San Jose’s Green Vision.

In addition to serving with Joint Venture, Seguin is vice chair of the education committee for the Silicon Valley branch of the U.S. Green Building Council’s Northern California chapter, serves on the board of the Michael Lee Environmental Foundation and is on the energy and sustainability committee of BOMA.

With all that responsibility, Seguin acknowledges that personal time is often hard to come by. She does get away with her friends for a hike or a movie or dinner now and then.

“Jennifer is sunny, cheerful and inquisitive and I like that about her,” said Emy Mendoza. “We’re both energetic and engaged people and we challenge each other.”

But mostly Seguin thrives on spending her off hours with her husband and three children on outings to the park, soccer games, the beach and other family pursuits. They understand, of course, that they must share Seguin’s attention.

After all, she’s also got a planet to look after.