If you don’t feel at least slightly unproductive after spending an hour with David Casas, you might want to check your pulse. That assumes you can even get him to sit still for an hour. When the dynamic Los Altos City Council member, realtor and former corporate financial and community affairs manager gets revved up, there’s no stopping him.

“When I do something, I go all in,” Casas said convincingly during a recent visit at his Intero Real Estate office in Los Altos. “I do not hesitate with my passion and my focus.”

That bodes well for Los Altos and for Joint Venture’s Wireless Communications Initiative, which Casas co-chairs with Dr. Edwin Tasch, Chief of Neurosurgery at Kaiser Permanente in Santa Clara.

Two years ago, Casas jumped off the corporate spinning wheel despite a senior role in community relations and social responsibility with LifeScan, the Milpitas-based subsidiary of health care behemoth Johnson & Johnson.

“I wanted to simplify my life,” he said. “I loved what I was doing, but I traveled extensively - and my kids were growing up without me around.”

It wasn’t the first time Casas saw one door of his life closing and didn’t simply wait for another door to open. You might say he built his own new door, along with two windows and a skylight for backup.

“I’m one of those guys who only needs four to five hours of sleep a night,” he says. “I get a lot done. I enjoy solving problems, and I love being in public service and creating a better community for my children.”

This all started back in 1998 when Casas was reading to his son’s kindergarten class and realized there were only two computers available to the kids. He rolled up his networking sleeves and soon seventy Macs were donated to the school.

That led to volunteering on school and park committees, election to the Los Altos School District board in 1999, election to the city council in 2003 on a platform of “fiscal discipline, transparency and ethical decision-making,” and re-election in 2007, including two terms as Mayor of Los Altos.

When a cell phone tower installation created a significant division within the community in 2005, Casas dove into the issue with his customary zeal.

“I realized we didn’t have a structure to manage expectations around the issue, so I asked the council to create a committee, which I offered to lead to draft a new wireless ordinance,” Casas said. “We invited the carriers to work with us, and when the ordinance came up for a vote, everyone supported it, including the industry.”  The City has since approved a number of new antennas without community disharmony.

The experience introduced Casas to the work Joint Venture is doing to support a broader infrastructure for cellular equipment in Silicon Valley.

“I’m a nuts and bolts guy,” says Casas. “We must have a balanced strategy to accommodate the needs of the community, the technology providers and the carriers.

“I believe Joint Venture is helping to frame the dialogue necessary to dispel the fears and distrust around wireless technology, but it’s going to take both time and a deliberate approach.”

“I believe Joint Venture is helping to frame the dialogue necessary to dispel the fears and distrust around wireless technology, but it’s going to take both time and a deliberate approach.”

“David has been a driving force in moving projects throughout the community forward,” said Los Altos City Manager Doug Schmitz. “He is realistic, but he’s visionary as well. He is very direct and forthright. He gives you an unvarnished version of information. It’s very refreshing.”

Local government, community affairs and determination come easy to Casas, who grew up in a diverse and politically active family. Born in Redwood City and raised on the mid-Peninsula with his three older sisters, David is part Caucasian, part Hispanic and part Choctaw Indian.

His father, Clemente Casas, was one of nine children and a former Air Force serviceman who met David’s mother, Jane, at a USO dance while stationed in Louisiana. After the couple was married, the family moved to the Bay Area where Casas’ father took a job with the U.S. Geological Service and his mother worked in retail.

“Neither of my parents went to college,” says David. “In the beginning, money was pretty tight, but we always did fun things as a family – camping, biking, and volunteering.”

As early as fifth grade, Casas was testing high in math ability. “It always came easy to me. Numbers just made sense.”

Casas finished his Palo Alto High School requirements in three years, and then went to Foothill College for most of his senior year. David subsequently transferred to San Jose State, where he graduated in business administration and finance. He later earned his Master’s in Technology Management at Pepperdine University’s Graduate School of Business. 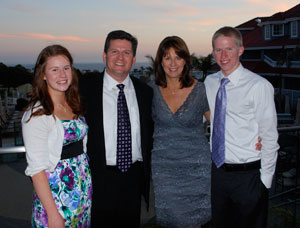 At age 19, while working at the Fish Market restaurant in Palo Alto, he was instantly smitten by a new hostess, named Carol, the moment she arrived for her first day on the job.

“I knew right then and there that she was it, she was the one,” Casas says. They were married in 1989 and have a son, Scott, who will be a freshman at the University of Southern California this fall, and a daughter, Paige, who will be a sophomore at Los Altos High School.

Casas began his professional career working in finance for Hewlett-Packard and Lockheed, then spent several years as a financial consultant.

It was during that period, in 1996, with a 3-year-old son and a 3-week-old daughter, that Casas was diagnosed with cancer. But that didn’t slow him down for long. After surgery and radiation treatments, he returned to the workforce, landing a corporate finance role with Silicon Graphics.

In 1998, he began a ten-year career with Johnson & Johnson, managing financial affairs for senior executives for five years before moving over to head up Community Relations and Corporate Social Responsibility in 2004.

“I wanted to do more than just finance,” he said. “While I enjoyed solving complex problems, and helping to establish new products globally, I saw the potential in unleashing the passions of our employees.”

For the next five years Casas did just that, helping create a number of new initiatives, and strategic partnerships, aligned with the company’s global vision. With a corporation the size of Johnson & Johnson – 250 companies in 57 countries with 115,000 employees – demands for David’s time increased each year, as his efforts received companywide accolades.

The last few years at Johnson & Johnson, Casas was traveling more than 16 weeks annually and, towards the end, he began to reflect on his family. “I wanted to cherish the time I had while my kids were still at home,” he said.

Towards the end of 2008, after four back-to-back trips, Casas put together a business plan with his wife over a single weekend. “My wife was already in real estate and we decided to partner in the business.”

“He is always, always in a good mood, easy to get along with, and very outgoing”

Over the past few years, David and Carol quickly have become two of the top realtors at the number one market share company in Silicon Valley.

“David embodies every one of Intero’s core values,” said John Thompson, Intero co-founder and Executive Vice President. “He is always, always in a good mood, easy to get along with, and very outgoing – all the important things you need in sales. He’s a true professional. I could not be happier to have him as a member of our team.”