A leg injury playing college football may have dashed Paul Gustafson’s NFL dreams, but he certainly managed to land on both feet in the end zone we call Silicon Valley.

Since those days back in the early 1980s, Gustafson has braided two seemingly disparate fields – engineering operations and journalism – to score a number of career touchdowns.

It has all led to his current role as president and general manager of the high tech marketing communications agency, TDA Group, and chair of the Communications Committee on the Joint Venture board of directors.

“It’s a great role for me,” says Gustafson, whose agency designs and produces enterprise content, communications strategy and programs for a number of Fortune 50 tech companies.

“The most fun for me,” he adds, “is the strategy work with our clients,” which include IBM, Intel, Dell, SAP, Brocade and McKesson. “I love doing something that’s going to make a real difference in the marketplace. Here at TDA, we may be a small company, but we operate on a big stage.”

Gustafson has been with Mountain View-based TDA Group since 2006 and took over as president in 2008 when founders Bob Tabke and his wife, Deb Dawson, sold the firm to CyberMedia, a global media company based in Delhi, India. The agency offers content marketing, custom publishing, brand development, graphic design and writing services and produces all forms of digital content (including videos, web sites, publications, white papers, brochures, collateral and other interactive media) for its clients.

Tabke was active on the Joint Venture board while he was with TDA, and he relinquished his seat to Gustafson.

“I had two reasons for wanting to continue our work with Joint Venture,” says Gustafson. “Joint Venture had a lot going on and it was a non-controversial, apolitical organization doing good work that we can support. Personally, I liked the way it was working to make a difference in Silicon Valley. I am passionate around civic entrepreneurship. It was a nice match for my personal values and for TDA to build relationships with other civic-minded leaders in the valley.”

“Joint Venture had a lot going on and it was a non-controversial, apolitical organization doing good work that we can support.”

“Paul has an absolute can-do attitude and surprisingly has always been able to do what he thinks he can do when he puts his mind to it,” Hemminger said. “He will somehow find a way to get it done for what the customer needs. Paul is creative, willing to apply a new approach to an old problem. Plus, he’s got a great sense of humor and always manages to lighten up any situation. If you’re ever down, give him call.”

During four years at Adobe, he led business development for the “Carousel project” - the skunk works that led to Acrobat – and managed Adobe's relationships with Lotus, Microsoft, WordPerfect and others.

At General Magic from 1992 to 1994, Gustafson led business development for Telescript, a Java-like technology. General Magic had stars that went on to do big things: Steve Perlman later started WebTV; Pierre Omidyar started eBay. There were other memorable meetings, too.

“Just about all of General Magic’s product ideas - smart  phones, e-commerce, device fashion - have  become commonplace,” recalls Gustafson. “Much of the iPhone and Android leadership sprung from work at General Magic. We were just way too early.”

Gustafson also remembers meeting Jeff Hawkins when he was working on Graffiti, which led to Palm. “He used to carry around a small block of wood, trying to convince Magic that it had to be that size. He was right.”

Both Fred Brooks (inventor of the IBM 360 and author of the "Mythical Man Month") and Tom Clancy sat on the board of directors at Virtus while Gustafson was there. “We started "Red Storm" with Clancy when I was there, and Timeline Studios with Michael Crichton, and worked with Douglas Adams.

“I was lucky to cross paths and interact with so many fascinating, innovative people at an embryonic time for high tech in Silicon Valley.”

Gustafson was born in the Northern Iowa town of Charles City, home to a few thousand people and the birthplace of the American tractor at the turn of the century.

His father, Leonard, was the superintendent of schools in nearby Nashua, and his mother, Betty was a registered nurse. The youngest of four, Paul has a brother, Steven, and two sisters, Mary and Peggy Sue, who all now live in Florida with their families.

When Paul was still a toddler, the family moved to Nevada, Iowa, when his father became superintendent of a bigger school district.

“Nevada was a great place to grow up,” Gustafson said. “Kind of a ‘Mayberry, RFD experience’. After school I often rode my bike to the hospital where my mom worked. I also liked to play baseball and basketball, chess in the winter, and I did magic shows for my friends as a kid.”

When Paul was ten, the family moved to Ankeny, where he attended junior high and high school before enrolling at Central College. “I thought I might be a history or math teacher and football coach,” he says. “Even after I transferred to Iowa State I still didn’t know what I wanted to do. My brother told me to get an engineering degree, so I did.

“But I also discovered I liked writing a lot. I worked as a freelancer writing features and a column for The Iowa Engineer magazine, and I ended up getting a journalism degree, too.”

Gustafson was compelled by word spreading from Silicon Valley about the explosion of computer technology and he frequented the college job center to study the Mercury News classified ads that were arriving weekly.

“At the time, the Mercury job section was bigger than the entire Des Moines Register,” he recalls with a smile. “I flew out here with a buddy and we did thirty interviews in five days with one car. We both got hired.”

Gustafson landed an internship with Tymshare, a Cupertino company selling computer time and PC software. He lived in a converted garage, and he was quickly hooked on the innovative, entrepreneurial spirit of the region.

“It was so cool. The future was being invented and I wanted to be here. I went back to Iowa to graduate and started writing letters to companies for jobs. Then I got in my car and drove west. I didn’t have a job when I left, but when I stopped in Phoenix to see an old girlfriend, I got a message from Denny Brown at Teknowledge.” Brown clearly remembers the call.

“We didn’t really hire people right out of college back then,” Brown said the other day. “But Paul had a really interesting, exploring, aggressive curiosity about him. We brought him on as a junior para-technical. It’s so gratifying to see people really blossom. Paul was always a self-starter. He has initiative, integrity and is a very straightforward guy. He’s done very well over the years.”

“Paul was always a self-starter. He has initiative, integrity and is a very straightforward guy.”

“Other than pitching for the Giants, this had to be the best first job any kid out of college ever had,” says Gustafson. “I learned a ton.” It also presented an unforeseen opportunity that would change his life.

One day at Teknowledge in 1985, Gustafson was asked to make a presentation to a client, but he didn’t have any nice clothes.

“I was an Iowa boy fresh from college and all I had were T-shirts and jeans,” Gustafson recalls. “I didn’t own a dress shirt or a tie or slacks. So I bought some pants, but they needed to be altered.

“The dry cleaner across the street had a sign saying ‘Alterations,’ so I went in and told the girl at the counter that I needed the pants for a meeting that afternoon.” 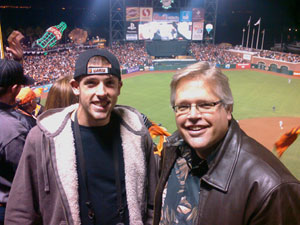 The girl, Karen Decio, said she was just filling in for a friend and told Gustafson she didn’t do alterations. “If you fix them for me now, I’ll buy you lunch,” Gustafson pleaded.

You know where this is going. Paul got his pants, lunch led to another date, and another. On June 28, 1987 they were married. Today the couple has two children, Madelaine, a junior at the University of Arizona in Tucson, and Lars, a senior at Los Gatos High School.

After four years at Teknowledge, Gustafson moved on to Adobe and his career began in earnest.

“Fifteen years on the startup gerbil wheel taught me everything about software and I got to know the landscape inside and out,” he says. “I’ve been very fortunate to work at some great places and with some amazing people in my career.”

Outside the office, Gustafson is an avid fan of the Sharks, 49ers and Giants, loves to cook, play golf, and scuba dive. Mostly, though, he’s all about family.

For the past two years, Karen has been battling breast cancer, which has taken a toll on the family, but Gustafson remains upbeat about her treatment and keeps family and friends updated on the Caring Bridge website.

“It’s a tough fight,” he says with his customary resilience, “but we’re doing everything we need to do.”

Those who know Paul best would expect nothing less from him.