Erin Cooke can pinpoint the moment she first realized she was an environmentalist. It was the day she tied herself to a tree in her back yard in Pennsylvania to stop the destruction of her favorite tree fort.

“I went in our garage and found some of my dad’s old rope and tied myself to the tree,” she recalls, an obvious sense of pride in her voice.

Cooke may not have known the “E” word at the time, but she understood her connection to nature.

“Growing up in a small rural town I was always outdoors, surrounded by trees, water, insects, hiking trails. Nature was my swing set, my sandbox, my video game console, all wrapped into one. It was important to me, and so was protecting it.”

“Joint Venture provides the forum and the toolkit for sustainability managers to navigate, partner and complete projects that otherwise wouldn’t happen.”

Her passion for conservation and sustainability has taken her on a coast-to-coast journey of education, recreation and career moves. Today Cooke is the Environmental Affairs Coordinator for the City of Cupertino, and also serves as co-chair of Joint Venture’s Public Sector Climate Task Force.

Cupertino created the position in 2008 and Cooke is the first to fill it. She is charged with raising environmental awareness across departments and she works to engage the staff, students, businesses and residents of Cupertino in activities that achieve greenhouse gas reductions and promote resource conservation. She’s also responsible for acquiring funding to support these efforts, either through operational savings or grant dollars.

“Erin was a brilliant match for what we were trying to do when we created this position,” said her supervisor, Cupertino Public and Environmental Affairs Director Rick Kitson. “We wanted to promote change, to do things differently. We knew it would require innovation and collaboration, and she had a real spark."

“She has an obvious capacity for communication and an incredible passion and intellect,” Kitson added. “Erin doesn’t accept things the way they are. She makes change possible.”

“This is my dream position, what I’ve wanted to do my entire life,” Cooke says with her typical unbridled enthusiasm. “I am one hundred percent committed to growing the ways we protect the health of our environment and community in Cupertino. We work in the hub of innovation and I’m fascinated by the prospect of merging private sector successes into the municipal environmental world.

“I love the diversity of my work. It’s constantly changing, evolving, growing, much like the broader field itself. It’s perfectly matched for my personality. I’m a natural multi-tasker, someone who likes to have a ton of different things going on, both work and social.”

It begins with a daily 90-minute bike-train commute from her home in San Francisco’s SOMA district to Caltrain at Fourth and King, alighting at the Sunnyvale station and finishing with the four-mile ride in her signature polka dot helmet to Cupertino City Hall.

“In this job you’ve got to walk the talk,” Cooke says, quickly adding that she embraces the concept, and is able to work on the train with her MacBook Air and iPhone. “Cupertino is a progressive city, and we have world class companies like Apple here, driving environmental change across all sectors. So it’s important to put our best foot forward when designing programs and services to match our community’s demands.”

Among her successes so far, Cooke was able to fund an energy service project focused on streetlight and irrigation controller retrofits that will cut the city’s associated utility bills by 40 percent and save approximately 30 million gallons of water and $220,000 per year. She also launched GreenBiz Cupertino, a program that supports and recognizes businesses that promote the quality of life in Cupertino by conserving energy and water, thereby cutting operational costs, minimizing waste generation and preventing pollution. Another of her programs, Growing Greener Blocks, helps residents learn more about recycling, composting and installing free energy-saving devices.

Working with Joint Venture enhances her role, Cooke says, by facilitating what she calls “coopetition” among neighboring Silicon Valley cities to keep abreast of and emulate other successful environmental programs.

“Joint Venture has carved out a niche as a leader and convener for work that needs to get done,” Cooke says. “We don’t have a big team here at the City, so it’s very important to bolster partnerships with other communities to transition our field’s historic scope of work from the ‘3Rs’ – reduce, reuse, and recycle - into the future of electric vehicles, enterprise carbon accounting, ecosystem services, and beyond.

“Joint Venture provides the forum and the toolkit for sustainability managers to navigate, partner and complete projects that otherwise wouldn’t happen. It’s really a group of environmental superstars.

“I wanted to participate as much as possible from the beginning. I couldn’t get enough of the group’s camaraderie and commitment to making change happen. Our work is driving local efforts and establishing regional models that the rest of the country looks to when in search of environmental best practices at the project and policy level.”

Silicon Valley is a far cry from Cooke’s roots in the 1.4-square-mile borough of Sinking Spring in eastern Pennsylvania, then a town of fewer than 2000, about seven miles outside of Reading and an hour from Philadelphia.

Erin’s father, Chet, is an insurance auditor – “the friendly kind,” she quickly adds – and her mother, Kim, recently retired, taught second grade, which meant collections of bugs, butterflies and similar class projects were frequently in the house.

“It was 1950s style living,” Cooke says. “I was consumed by scouts – Daisies, Brownies and Girl Scouts. I went to a ton of outdoor-oriented explorer camps that focused on hiking, nature crafts and water activities.

“I’m a natural multi-tasker, someone who likes to have a ton of different things going on, both work and social.”

After graduation from high school, Cooke wanted to avoid the “High School, Phase II” experience of a local college. She opted instead for the University of Massachusetts at Amherst, where she earned a BBA in business management and a BS in natural resources studies while also competing on the nationally ranked Minuteman rowing team.

Cooke landed her first job at The Canyons Resort in Park City, Utah, where she audited resource and energy consumption and drafted the first environmental management report to track resort-wide execution of the National Ski Area Association’s Sustainable Slopes Charter.

“What’s not to love about working on environmental projects at a ski resort, but I realized I didn’t want to live in a ski town the rest of my life,” says Cooke. After two years at the Canyons she enrolled in grad school at Columbia University in New York.

While at Columbia, Cooke consulted with the New York Economic Development Corporation on alternative waste management technologies for Manhattan and interned with the NASA Goddard Institute of Space Studies and the New York Department of Environmental Protection to draft the first climate protection and adaptation plan for the City of New York.

After she earned her master’s in public administration and environmental science and policy in 2005, Cooke spent a summer investigating operational efficiencies and writing a business plan for the National Park Service in Flagstaff, Arizona.

That fall she took a job with CLF Ventures, the non-profit consulting arm of the Conservation Law Foundation in Boston, and held a companion position as Managing Director of the CLF-created Environmental Insurance Agency.

“Erin is champagne in human form,” said her close friend Alicia Conway, a rowing teammate with her at UMass and later roommates in Boston. “Whatever you are doing or celebrating, she makes the moment with her energy. It’s amazing to be in her orbit when she’s doing her thing.”

“I learned so much from her about the environment,” added Conway, now working for Bank of America in Charlotte, North Carolina. “She loves to teach. People really connect to her. I have an amazing sister, but if I could have picked another one it would be Erin.” 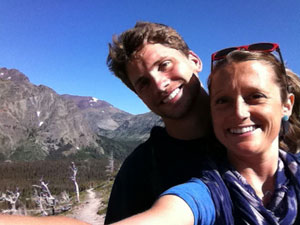 It was while Cooke was getting settled in Boston that two of her matchmaking aunts, while attending a Crosby, Stills and Nash concert together, conspired to fix up Erin with Andy Russell. She had heard of Russell when she was younger but hadn’t paid him much attention. At the aunts’ urging, Cooke and Russell reluctantly agreed to the meeting.

“Andy was working for Hasbro as a toy designer in Pawtucket,” recalls Cooke. “It turned out he is the Peter Pan to my Tinkerbelle – we were just a couple of grown up kids.”

They soon learned how much they both love to hike, bike, camp, explore and play. Another passion they shared was a little league team, the Giants, which they coached together for three years in Boston’s low income Mission Hill neighborhood.

“Baseball became a core part of our lives in the spring each year,” she says. “Not because we were following the Red Sox, although they won two World Series while I lived there, but rather through the practices and games we shared with 20 five-to-eight-year-olds whose entire world revolved around the next time they’d get to play.

“I loved that we could help these kids living in an urban environment reconnect to green grass, blue skies and a life with potential and promise if you stayed in school, because school enrollment was the sole criteria to participate in the league.”

Ultimately, Erin and Andy became a team of their own, in a wedding ceremony held in a picturesque meadow at Yosemite National Park in 2010.

The couple moved to California when Andy was accepted to Stanford’s Graduate School of Education in 2008. He has since co-founded a small educational software startup, Launchpad Toys, creators of Toontastic, a kids’ storytelling and animation tool for the iPad.

Erin, too, has knitted her environmental passion into her own side business, Vintage Cookie, a line of vintage clothing, jewelry and accessories made from recycled or reclaimed materials.

“As an only child, I really had to entertain myself as a kid,” she says. “I was addicted to crafts and other homemade projects and used what was around the house or available to me in the backyard, like making a tiered necklace with a box of elbow macaroni and a hair fastener out of pinecones.”

“It’s really fun and both my work and craft require incredible resourcefulness. I also love sourcing flea markets and clothes-swapping with friends, but don’t get me started on that.”

She and Andy spend most of their vacation time in the outdoors. In fact, they just returned from a trip to Glacier National Park with Andy’s parents, who, much like Erin’s parents, enjoy discovering new landscapes in the west and backpacking in the forest.

As long as Erin doesn’t tie herself to any more trees.