Some people in Silicon Valley tend to toss the word “passion” around disingenuously, but Bobby Ram isn’t one of them.

In an hour’s conversation about his long career with SunPower Corporation and the potential of solar energy to change our lives and the way our world is powered, Ram used the term at least a dozen times and meant every one of them.

That’s understandable when you learn that his inspiration comes from growing up in the Fijian Islands among a family of fifteen living in a two-room bure, a wood-and-straw hut with a thatched roof – and no electricity.

"We made a personal connection and I was excited about Joint Venture’s regional focus,” Ram said. “They fix problems that affect the entire region. They aren’t a public policy group."

“We had no running water either,” he says. “We showered in the river or from buckets of water from a well. As kids we slept five across on one bed with a hay mattress. To press my clothes for school, I put them under the mattress.”

It’s fair to say Ram has come much further than the mere 5500 miles between Fiji and Silicon Valley.

Today, he ranks among Silicon Valley’s pioneers, with more than thirty years behind him in the semiconductor and solar industries, including the distinction of being employee number two at SunPower, dating back to 1993.

Ram currently manages global community relations for SunPower and serves on the Joint Venture board of directors and the executive committee of Joint Venture’s Climate Prosperity Task Force.

During a recent visit to his office in SunPower’s new San Jose headquarters, Ram was reveling in the success of his most recent project, a summer solar academy for K-12 students to expose them to early career opportunities in renewable energy.

“We just finished our first academy with sixteen students from four schools in the San Ramon Valley Unified School District,” Ram said. “We taught them about solar basics, how the system works in the school district, the economic benefits to the school, the environment and the local economic impact on their community – the entire value chain of a solar program.

“I met with parents, teachers and students, and  put all the materials together and recruited the instructors and attended the program every day. I wanted the personal experience.”

Ram says the rewards of community affairs work equals any he’s had in his eighteen years with SunPower, which includes roles as director of sales and marketing and managing director of the specialty products division.

“We made a personal connection and I was excited about Joint Venture’s regional focus,” Ram said. “They fix problems that affect the entire region. They aren’t a public policy group.

“I’ve always been interested in working with local and regional governments on the concept of aggregating solar in multiple jurisdictions. Joint Venture had the connections to the right players. It was a perfect fit.”

Ram joined the Joint Venture board in 2006 and began collaborating with former Joint Venture executive Seth Fearey on creation of a climate action team and a regional solar purchase plan, which ultimately led to the successful Renewable Energy Procurement Project. 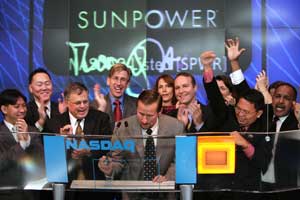 At the time, Ram had been with SunPower for thirteen years while the company grew from a fledgling Silicon Valley startup into a global solar industry leader.

Ram remembers the exact day his SunPower career began with a phone call from solar pioneer and SunPower co-founder Dick Swanson. Ram had been working in fab operations for T. J. Rogers at Cypress Semiconductor.

“It was March 3, 1993,” Ram says. “My dad was sick and I was driving in the rain from visiting him. Dick called and said he was working on a solar cell for a racecar for Honda. He wanted to know if would come to help him.

“I had no idea what a solar cell was, but I took a liking to him and it was a great opportunity to design a solar fab facility. I started working that day.

“That day changed my life,” Ram continued. “Having lived many years without electricity, I understood the socio-economic impact that solar could bring to regions around the globe that did not have access to the simple and basic needs such as electricity. I fell in love with the technology and my passion of solar continues to grow each day. Now 18 years later it truly feels good to know we are changing lives and changing the way the world is powered! It feels awesome!”

When he arrived at SunPower, Ram recalls asking to see wafer fab specifications and being met with blank looks. “It was the funniest thing, like I was asking for a sample of a meteorite,” he says. “I realized then that the road was going to be rocky. Here were some of the world’s brightest engineers and technologists, and everything was in their brains. The fact that most of us were ordinary people – who needed to see things like specs – was just beyond their understanding.”

Soon afterward, the first specs began to materialize -- scribbled on clean-room paper towels, and lint-free wipes taped to workstations. Since there was only one computer in the company, Ram began transferring the procedures from paper towel into Word format at night, so they would be ready for use in the morning.

“Bobby connected with people well,” Swanson said. “He was tenacious, like a little bulldog. He would grab onto people’s legs and shake until they said yes. He found business for this tiny four-inch wafer fab we were producing.

“I think he’s like so many immigrants,” Swanson continued. “Bobby came to this country with essentially the shirt on his back and nothing else. He is just a go-getter, that’s the only way to describe him. He brought that savvy knowledge of the world and an ability to find a common ground with customers.”

Mike Dooley, director of product development and product management for SunPower, echoed Swanson. “Bobby has an incredible passion for solar and he’s very effective at getting people to work with him. Customers love him,” said Dooley.

“That day changed my life,” Ram continued. “Having lived many years without electricity, I understood the socio-economic impact that solar could bring to regions around the globe that did not have access to the simple and basic needs such as electricity. I fell in love with the technology and my passion of solar continues to grow each day.”

When the Honda project was completed nine months later, it appeared the company would disband, but Ram helped persuade Swanson to continue developing solar cells and transition the company from an R&D lab into a real commercial company.

An extraordinarily hard worker, Ram spent sixteen-hour days on the job for years, traveling extensively around the world, with pressure increasing steadily once the rooftop panel market began to boom starting in 2000.

The addition of CEO Tom Werner in 2003 and explosive growth brought an IPO in 2005, when Ram participated in the bell ringing on the NASDAQ floor.

The pace eventually caught up to him while in the office one day in 2006. “I was feeling lousy, with chest pain and pain down my left arm and in my jaw – all the classic symptoms of a heart attack. I was 46.”

He left the office and on his way home realized he was in trouble. Ram tried to call 911 but couldn’t, then drove himself to the Kaiser emergency room. “I walked into the lobby and passed out,” he says.

After he recovered, Ram returned to work on a lighter schedule. Six months later a blockage not repaired in the earlier surgery led to another heart attack. That finally prompted the change from sales and marketing to his current role and semi-retirement - a cutback to three days a week.

Ram is the oldest of five children born in Lautoka, Fiji’s second largest city, to educators. His father, Paras, eventually became Principal Education Officer and his mother, Gyan, retired as a high school principal. Both were great role models for him.

“I had a great childhood,” he says. “We lived with my grandfather’s family. He was a farmer, mostly sugar cane, but he had goats and cows and horses.” I loved working on the farm. I truly am a farm boy at heart.

When Bobby was nine, the family moved to another town where the family had electricity in their home for the first time. Three years later, they moved again, to Suva, Fiji’s capital and largest city, where Bobby attended Marist Brothers High School. 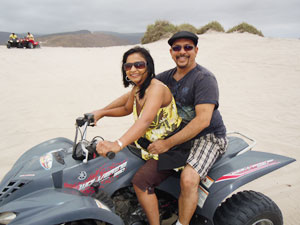 It was there that he first met the girl of his dreams, a 13-year-old neighborhood girl named Jenny, who attracted him enough that he told his friends the day he saw her that he would marry her someday, but they did not officially date for another year. Now thirty-eight years later she is still his dream girl.

They married in 1979, when they were both nineteen and she was already in the U.S. Jenny continued her education while Bobby joined her in Silicon Valley and worked three jobs, eventually landing a position as a chemical technician with National Semiconductor.

He spent five years there, rising to production supervisor, before moving on to Advanced Micro Devices in 1985 as a senior manufacturing supervisor and then to Cypress Semiconductor from 1988 to 1993 where he served as their manufacturing manager.

Jenny earned her degree in finance at the University of Notre Dame de Namur and an MBA at Golden Gate University.

When their son, Calvin, was born in 1982, Bobby decided to put off college in order to help raise him. Calvin earned his undergrad degree and an MBA at Santa Clara University and now is director of operations for a medical company.

Bobby and Jenny’s daughter, Jody, was born in 1987, graduated from UC Berkeley and is currently in her first year of medical school at George Washington University in DC.

Today Jenny is the senior manager of financial operations for the law firm of Wilson Sonsini Goodrich & Rosati. The family has lived in Foster City for 28 years.

Outside of work, Bobby plays guitar in his own band, called Dhoom the Band, at local parties, weddings, restaurants and charity events.

“Bobby is an open, honest, upfront guy, very jovial,” said James Prasad, a Silicon Valley software entrepreneur who plays bass guitar in the band. “I’ve known him since we were teenagers. We had a band in Fiji. He has an amazing ability to connect with the audience.”

In his spare time, Bobby also likes to bike, travel, read and fish.