Maybe Jessica von Borck should have been a structural engineer, if her love of building bridges is any indication.

Of course, von Borck loves building bridges in the figurative sense, creating connections that link businesses and the community, but the goal is the same: producing a crossover infrastructure that supports both.

“It’s the most fulfilling role I have,” said von Borck, who manages economic vitality efforts for the Town of Los Gatos and is the chair of Silicon Valley EDA, a Joint Venture initiative.

“Helping small business owners meet their goals, retaining and attracting new business, and enhancing the town’s economic vitality programs are joyful for me,” said von Borck. “I value the public process greatly, the ability for everybody to contribute and collaborate, especially from a business perspective.

“I got involved with Joint Venture and it was such an eye opener for me. I realized this is how to get things done. It’s about sharing results.”

“This community is highly engaged. There is no shortage of input and opinions on every project. It’s not always easy, but I love the challenge.”

Von Borck’s role in Los Gatos finds her working with all town departments and a broad spectrum of the population, from seniors and baby boomers to Gen Xers and Millennials.

“It’s the best time to be in the work place,” she says. “The Baby Boomers have so much experience and wisdom to share and the Millennials are innovative and energetic. They push me out of my comfort zone and drive me to be better.”

Despite grapevine messages to the contrary, the vacancy rate for downtown Los Gatos is just two percent, down from nine percent when she arrived from a previous ten-year economic development and urban planning role in Mountain View.

Not adverse to a challenge, in recent years von Borck has dealt with significant changes in both residential and commercial sectors in Los Gatos, with such controversial projects as the Netflix expansion and Dittos Lane development, plus the turnover in downtown retail stores, restaurants and auto establishments.

Her biggest project at the moment is the “North 40,” a mixed-use development on Los Gatos Boulevard at the intersection of Highways 17 and 85. Now in the early planning stages, the project may potentially feature a mix of new public spaces, homes, stores, restaurants, entertainment and office uses.

“But before the community can move forward they have to fully evaluate potential uses of the site in a public process. Change is challenging. Bold choices are always controversial.”

Collaborating openly and effectively with government, business and the community at large is a strategy that von Borck brings to her role with Joint Venture as well. Back when she was a senior planner for Mountain View in 2002, her supervisor took von Borck to a Joint Venture meeting at the Tech Museum, where she first encountered CEO Russell Hancock.

“He was such a spark plug!” she recalled. “I thought, he’s got great energy and I want to work with him. He was a huge champion for openness and collaboration. 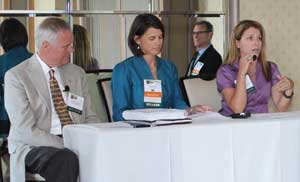 “I got involved with Joint Venture and it was such an eye opener for me. I realized this is how to get things done. It’s about sharing results. You want others to learn what your model was and from them you get better and different ideas of what works. I found I really loved the collaborative and innovative spirit of this profession.”

“Jessica is very energetic and creative,” said Ellis Berns, assistant director of community development and economic development manager for the city of Mountain View, who worked closely with von Borck for several years and took her to that first Joint Venture meeting. “She is knowledgeable and has a keen interest in seeing businesses succeed.”

Berns said von Borck was particularly instrumental in building relationships with small and large Mountain View-based companies. He credited her with helping Google to create the company’s first childcare center.

“It was sad to see her leave,” said Berns, “but it was a positive move for her and it’s been beneficial to Los Gatos.”

Von Borck became chair of Silicon Valley EDA last year. “I’m proud of the work we are doing at SVEDA,” she said. She has been instrumental in supporting a series of “Broker Breakfasts” to provide updates on economic development in various sections of Silicon Valley. Four have already been held, with more to come.

Previously she served as marketing chair and developed a strategic marketing and outreach plan for Silicon Valley EDA that has resulted in significant new opportunities for members to work with entities of interest, such as startup companies and the commercial real estate industry.

Von Borck grew up outside Boulder, Colorado, the second oldest of four children. Her father, Bill Detzi, was an engineer with IBM and her mother, Carolyn, was a public health nurse. She has a sister, Jennie, in Seattle, a brother, Ed, in Montana, and another brother, Dan, in Washington, D.C.

“Helping small business owners meet their goals, retaining and attracting new business, and enhancing the town’s economic vitality programs are joyful for me.”

“I was such a tomboy,” von Borck said. “We lived in the mountains. I rode horses all the time, skied every weekend. And I ran, everywhere. I loved anything outdoors.” National parks were frequent destinations for family vacations, she said.

When it came time for college, Jessica’s parents wanted her to stay close to home, but she was ready to leave the nest.

“At first I wanted to be an electrical engineer like my dad. Math and science were my best subjects. Plus, working at IBM then had a lot of perks, it was the Google of the 80’s.”

She ultimately decided on Arizona State University, where she experimented with different classes like art and architecture, looking for a subject to equal her passion. Then she took an urban planning course.

“I had this ‘A-ha!’ moment. I thought back to our summer road trips and how I would always look at a city and wonder how it got to look like this and why I did or didn’t like it.” 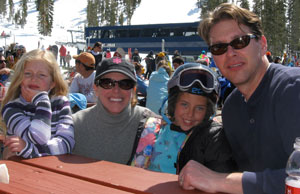 It was also in Arizona where Jessica met Derek von Borck on a blind date. After they had dated for three years, he accepted a sales position with a San Jose-based technology company in Frankfurt, Germany. Before he left, he proposed to Jessica.  Not one to miss out on an adventure, she went with him to Germany and they eventually married.

“It was a turning point for me,” said Jessica. “Due to my husband’s work, I found myself alone a lot and isolated because I didn’t speak the language. So, I took German classes at Berlitz, and was eventually asked by the school’s director to teach English. “I started to teach business English and realized I had a knack for it.  I eventually started my own business as a consultant to companies in Frankfurt and later in Stuttgart.”

Von Borck worked with such large corporations as Daimler Chrysler, Mercedes Benz and Porsche before she and Derek moved back to the U.S. in 1999, settling in Silicon Valley.

Von Borck found work as a planner in Mountain View, where she remained for ten years, rising to acting economic development manager in 2008 before reuniting with Greg Larson in Los Gatos a few months later.

“Jessica is a wonderful woman,” exclaimed Patty McGuigan, a commercial real estate broker for Cornish and Carey who has known von Borck for the past eight years and worked with her on development projects in Mountain View. “She is so creative and listens well. She is collaborative and responsive, always smiling, and without a huge ego.”

Jessica and Derek welcomed their first daughter, Hailey, in 2000, and another, Stella, in 2003. Today the family lives in Willow Glen in a lifestyle that is “ruled by our daughters,” von Borck said with a smile.

In between work and the girls’ soccer, dance lessons and school activities, von Borck still runs with a local team three days a week and she participated in the recent Rock ‘n’ Roll San Jose Half Marathon.

She even has energy left over to build a few more bridges.