Today John Sobrato joins a distinguished list of Silicon Valley icons who have been recognized by Joint Venture because they embody the spirit of the man for whom this organization’s highest honor is named.

Like David Packard, John Sobrato has brought the same sleeves-up, cross-boundary, problem-solving approach to civic engagement on our region’s challenges for five decades.

To more fully understand his generosity and his commitment to Silicon Valley, we need to start at the beginning.

John Albert Sobrato was born in San Francisco in 1939, the only child of Ann and John M. Sobrato. His father was an Italian cook who emigrated to the U.S. During the first World War and worked as a dishwasher until he saved enough to open his own restaurant in North Beach. It was called John’s Rendezvous, and it became quite popular.

“Like David Packard, John Sobrato has brought the same sleeves-up, cross-boundary, problem-solving approach to civic engagement on our region’s challenges for five decades.”

Young John helped out there at times, but his father discouraged him from the restaurant business, telling him it was too hard. Soon after, he died of cancer, when John was just 12.

With a child to support, John’s mother sold the restaurant, took English classes, and went into real estate on the peninsula. John attended the Palo Alto Military Academy and Bellarmine Prep.

After Bellarmine, he enrolled at Santa Clara university as an engineering major, but quickly decided he was better suited to business and while he was still a junior, John started selling Eichler houses in Palo Alto three days a week and arranged classes so he only had to attend school three days per week. He had discovered his calling.

At about the same time, while attending a friend’s wedding at the Palo Alto Elks Club, John struck up a conversation with the attractive woman in front of him in the buffet line. Her name was Sue Reece, and before long she would become Sue Sobrato. After his graduation from Santa Clara in 1960, Sue and John were married – both at 21.

He soon founded Midtown Realty, specializing in Eichler homes, and by the age of 22 he became the youngest member of the Million Dollar Club of the Palo Alto Real Estate Board. There were no houses and no people! Just walnut orchards.

In 1962, John and his mother expanded into commercial real estate. Their first development was a 14,000-square-foot building at 1260 Birchwood in Sunnyvale that they leased to Lockheed.

Within a year, Carl Berg joined Sobrato at Midtown Realty and a few years later they formed a partnership to develop tilt-up buildings for the emerging technology businesses in Santa Clara County – before it was known as Silicon Valley.

By 1973 they sold Midtown Realty and moved to Cupertino to concentrate on commercial property. Six years later, they split their properties and John formed the Sobrato Development Company, which has built more than 100 office and R&D buildings. John’s son, John Michael, joined the firm in 1983 and today is its CEO.

Their major office buildings include the iconic Apple headquarters in Cupertino, a huge 856,000-square-foot campus.

Today, the company owns 8 million square feet of office space and R&D facilities in Silicon Valley, and 8000 apartments in California, Oregon and Washington. 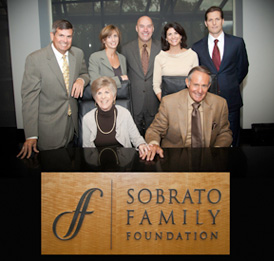 But as John’s family grew and joined him in the business, it became no longer just about putting up buildings, but about building a community. In their desire to make Silicon Valley a better place to work and live, John’s mother, John and Sue and their three children, John Michael, Sheri and Lisa, formed the Sobrato Family Foundation in 1996.

Spurred by their interest in improving education, health care, human services and other community programs, the Sobratos have provided significant grants to nonprofit organizations totaling nearly $300 million throughout the Valley.

This includes being a major sponsor to high schools like Ann Sobrato High School, Bellarmine Prep’s Sobrato Center for Humanities & the Arts and the Sobrato Commons building under construction at St. Francis High School; to universities, including the Sobrato Residence Hall and the Sobrato Technology Center at Santa Clara University and Sobrato Hall at the National Hispanic University; and to hospitals, such as the Sobrato Pavilion under construction at Lucile Packard Children’s Hospital and Valley Medical Center, where just last month the Sobratos donated $5 million as a challenge match to help to furnish and equip our new 370,000-square-foot building to be called the Sobrato Pavilion.

Let me add a note here as Executive Director of the VMC Foundation and a personal friend to John as well. I’ve been in the fundraising business for over 20 years now, and it’s all been here in Silicon Valley where I was born and raised. So I think I can offer a view of why John Sobrato is the epitome of the Silicon Valley philanthropist.

“Spurred by their interest in improving education, health care, human services and other community programs, the Sobratos have provided significant grants to nonprofit organizations totaling nearly $300 million throughout the Valley.”

You see, John’s generosity isn’t only about doing the right thing; it’s about results—very Silicon Valley. He wants to know, in detail, how his giving is making a difference and to how many people, over how long a time, in as many ways as can be measured.  He studies and he scrutinizes for as long as it takes before deciding to contribute…believe me, I’ve been on the other end of that scrutiny for a long time. It’s more than philanthropy; it’s truly “venture philanthropy,” and John demands a return on investment.

Now, to wrap up, the three Sobrato Centers for Nonprofits provide rent free office space to 56 nonprofit service providers totaling 350,000 square feet. Through Sobrato House and the Sobrato Center for Employment Training, grants and other endeavors, the Sobrato organization supports job programs, the Sobrato Early Academic Language program and many others.

Busier than ever at 72, John still finds time to do the things he loves away from the office, like traveling, spending time on his boat, fishing, water skiing, snow skiing and other activities with his five grandsons and two granddaughters.

For John, it always comes back to family and community.

On behalf of Joint Venture Silicon Valley, it is now my great honor to present the David Packard award for 2012 to John A. Sobrato.