Chairman of the board, Con-way, and Joint Venture board member

Keith Kennedy Jr.’s father used to tease him and his younger brother, James, that he had two sons with Ph.D.’s in electrical engineering and neither of them could fix the family TV set.

It turns out Keith Jr. was interested in electronics, but he was a bit ahead of his time for television.

“I became a ham radio operator at an early age,” he says. “I loved the idea that I could talk to people around the world. That really excited me.”

“Kennedy was an early board member of Joint Venture and is still active on the Joint Venture board as a strong advocate of bringing divergent interests together to make Silicon Valley a better place.”

That early passion for technology and communication on a global scale eventually led Kennedy to work at the telecommunications company Watkins-Johnson for three decades and later become board chair of freight transportation company Con-way, a post he still holds.

In addition, Kennedy was an early board member of Joint Venture and is still active on the Joint Venture board as a strong advocate of bringing divergent interests together to make Silicon Valley a better place.

“Becky Morgan originally recruited me in 1993 or 1994 as someone from the military electronics space,” Kennedy recalls. “She and Bill Miller of Stanford were big leaders in the whole concept of the team effort to make things happen.”

“Keith is a very perceptive and thoughtful person,” said Bill Miller, a Herbert Hoover Professor of Public and Private Management Emeritus and Professor of Computer Science Emeritus at Stanford University.

“And he is community minded, in keeping with the pioneering attitude of this area. He’s a very good team builder who works with people very well. Just a wonderful guy.”

By 2000, when Watkins-Johnson was sold, Kennedy retired and moved to Sausalito. But the new president of Joint Venture at the time, Ruben Barrales, asked him to stay on as a mentor. Then at the next meeting, Barrales announced he was taking a job with the Bush White House.

“By then I thought Joint Venture had completed its work and I said we should just declare victory and close up shop. But John Vasconcellos convinced me to stay and become chair.

“Today I still feel the greatest contribution Joint Venture makes to the community is that everybody can come to the table here. I was also on the executive committee of the Silicon Valley Leadership Group and received a lifetime achievement award for my work in local transportation. 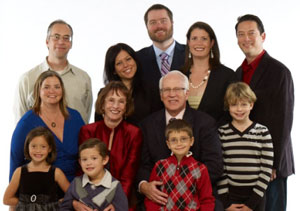 The Leadership Group does an excellent job, but it will always take a business viewpoint because that is its design. Joint Venture is designed to bring in the nonprofits, labor, academia and government.”

Kennedy is also a member of the Leadership Team for the statewide California Economic Summit on May 11 in Santa Clara, where the results of fourteen regional economic forums will be consolidated into an action agenda for state government around job competitiveness and state investment.

His other community passion is his work with the Charles W. Davidson College of Engineering at San Jose State University, where he is actively involved with “Project Lead the Way,” a program of “Engineering Pathways to Success,” a public-private initiative engaging middle and high school students in science, technology, engineering and mathematics (STEM) education.

It’s no wonder that he brings a strong academic influence to his projects. His father, Dr. W. Keith Kennedy, was a dean and provost of Cornell University, where he devoted nearly all of his professional life. Even in retirement, Kennedy Sr. served as Cornell’s acting dean of admission and financial aid. The administration building of the College of Agriculture and Life Sciences is named for him.

Dr. Kennedy Sr. was a graduate student at Cornell when he interrupted his studies during World War II to serve in the Army. It was while he and his wife, Barbara, were stationed briefly in Phoenix that Keith Jr. was born. After the war, the family returned to Cornell.

“His other community passion is his work with the Charles W. Davidson College of Engineering at San Jose State University, where he is actively involved with “Project Lead the Way,” a program of “Engineering Pathways to Success,” a public-private initiative engaging middle and high school students in science, technology, engineering and mathematics (STEM) education.”

“My first memories are in Ithaca, when my father was finishing his Ph.D. in agriculture and animal nutrition, and my mother had a fellowship at Cornell in home economics, studying ergonomics for kitchen counters, chairs and the like,” Kennedy recalls. “She had her master’s and taught some college and high school. She was a great influence on my education.”

After graduating from high school in the small town of Dryden, 14 miles from Ithaca, Kennedy had his pick of colleges. “As the son of a professor, I could have gone almost anywhere for free,” he says.

“My father was pushing for me to go to MIT, not Cornell, but a local professor I met started working on me in high school to attend Cornell, so I ended up there after all.”

At Cornell, Kennedy met his first wife, with whom he had two sons, Matthew and Mark.

“I finished my Ph.D. in 1968 and interviewed for teaching positions at various universities, but I really wanted to try business first,” Kennedy says. “I traveled around the country and got very excited about the Bay Area and some of the companies that were emerging – Varian, HP and others. I chose Watkins-Johnson because it was a small company that let people manage their own projects. I loved it.”

It was at Watkins-Johnson that he first met Claudia DaBroi Kelly, the corporate secretary with an economics degree from Stanford. Their interaction remained strictly professional, however, until his retirement, after which she invited him out to celebrate the Millennium. They married the following August.

After years of business travel, Kennedy longed to travel more leisurely. “I had an itch I wanted to scratch,” he says. “The first thing Claudia and I did was spend a month in France. Now I like to get out at least once a year for a long trip. Last year it was sailing in the British Virgin Islands.” They have also traveled extensively in Europe, South America, Japan, China, Vietnam, Laos and Cambodia. 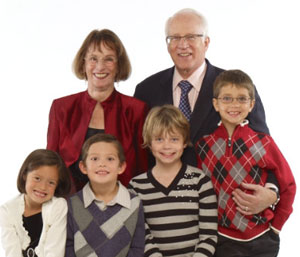 There are also grandchildren to visit and spoil. Both of Kennedy’s sons live in Southern California, and both took an opposite path in life from the scientific legacy of their father and grandfather, gravitating instead to entertainment.

Matthew earned a film degree from New York University and another in writing at the University of Southern California and is now teaching drama at a magnet school. Mark is an illustrator and head of story development for a division at Disney where he was Head of Story for “Chicken Little” and “Tangled” and worked on “Bolt,” “Home on the Range,” “Aladdin,” and “Beauty and the Beast,” among many others.

“They grew up going to theatre, concerts and museums as family outings and they’re both quite creative,” Kennedy says.

Kennedy has a creative side too, which he indulges in photography while on his travels.

But he still can’t fix a TV set.