First, there’s its stark tidiness. It’s so uncluttered that it momentarily suggests no one actually works there. Other than a keyboard and monitor, a few small family photos and a couple of mementos, there is almost nothing on Houser’s expansive desk and sideboard. No folders, no stacks of papers, no pens, no accessories.

And then one’s eyes are drawn to the large framed jersey of San Francisco Giants legend Orlando Cepeda, autographed by the “Baby Bull” himself, overlooking the room from a sidewall.

After only a few minutes with Houser, it becomes clear how this milieu encapsulates both his management style and his lifestyle – that of a no-nonsense, efficient, business leader who values loyalty and Hall of Fame-level hard work, and a fit, fun, sports-loving family man.

He also spends more time out of the office than in, visiting customers and their businesses up and down the state to better understand their needs.

“One key to success for his technology and venture banking group, Houser believes, is active involvement in community organizations and issues, especially in Silicon Valley. That led him to a seat on the Joint Venture board two years ago when his supervisor, John Adams, departed from the board.”

A 15-year Wells Fargo veteran, Houser oversees the bank’s Commercial Banking Groups in Santa Clara and Monterey counties and the Technology and Venture Banking Groups in Silicon Valley and southern California, and has been a Joint Venture board member for the past two years.

As the financial services industry continues to struggle with credibility, Houser says Wells Fargo is focused on customer service. Anyone who has entered one of its “stores” lately and been warmly greeted by a branch employee understands the customer-centric business model.

“Our business model is relatively simple,” he says. “We take in deposits and lend money.  We put the customer first and don’t engage in activities that do not include the customer.”

Houser is echoing the mantra of Wells Fargo CEO John Stumpf in the wake of its $15 billion acquisition of Wachovia that doubled Wells Fargo’s size.

“There are only three ways a company can grow,” says a 37-page book, Vision & Values, Stumpf has given to all 270,000 Wells Fargo employees, or “team members.” “First, earn more business from your current customers. Second, attract customers from your competitors. Or third, buy another company.”

One key to success for his technology and venture banking group, Houser believes, is active involvement in community organizations and issues, especially in Silicon Valley. That led him to a seat on the Joint Venture board two years ago when his supervisor, John Adams, departed from the board.

“Eric is one of our senior leaders, an innovative guy with very high integrity,” said Adams, an executive vice president and group manager for northern California and the Pacific. “He’s one of the guys we think about when we think about the future leadership of the bank.

“Wells Fargo is very committed to community involvement, and Eric is very involved both with Silicon Valley and in his own community. He was a natural to take my seat on the board. It was a great opportunity for him to get more involved with Joint Venture. We think Joint Venture is a great organization.”

“I met with Russ Hancock and I was overwhelmed at the scope of the regional challenges and the need for champions,” says Houser. “I realized that you need both sides to get something done and now I’m learning how different organizations work. There’s a different motivation in the public sector than the private sector.”

Houser sits on the board’s audit committee and has a growing interest in education and what he calls “financial literacy” – helping people understand budgets, savings strategies and how the financial system works.

Houser came to Wells Fargo’s Palo Alto commercial banking office from the Central Valley in 1997 at the dawning of the dot com age.

“We were getting calls from entrepreneurs wanting to deposit venture capital funds and open checking accounts to pay their bills and employees,” Houser recalls. “One of the Google founders came in and opened the company’s first account with us, and they’re still a customer. We learned a lot about entrepreneurs and investors and how they behaved.”

Today, Houser oversees a team of more than 50 and a $2 billion business. His region recently expanded to include Monterey County, where one of his customers is a commercial strawberry grower. “I’ve been walking the strawberry fields and learning more about the industry,” he said. “You’d be amazed at the process and the automation involved.”

Houser grew up in the eastern Michigan town of Midland, a community of some 40,000 where his father, Ron, was an engineer for DuPont and his mother, Marsha, taught elementary school. He has two sisters, Kari and Heather, and a brother, Greg.

“One of the Google founders came in and opened the company’s first account with us, and they’re still a customer. We learned a lot about entrepreneurs and investors and how they behaved.”

After his parents divorced, the family moved to the San Joaquin Valley, settling in Modesto, where Eric excelled in soccer and other sports. After high school, he enrolled at St. Mary’s College in Moraga, drawn in part by its successful soccer program, and studied business administration there.

“I was all set to go to Penn State to play soccer, but at the last minute I decided to stay closer to home,” he says. “I played my freshman year at St. Mary’s but then I decided to concentrate more on my business classes. I was always good with math, more of a numbers guy.”

It was in his sophomore year at St. Mary’s that he met Tammy Crane, a Stockton native who would become his wife in 1994 while he was earning his MBA in finance at University of the Pacific.

Eric made another lifelong connection at St. Mary’s in his roommate, Tim Malloy. “Eric is like a brother to me,” said Malloy, who now owns an insurance agency in Napa. “He’s been a rock, the one person in my life who would take the shirt off his back for me. Eric is really compassionate, very driven, sensitive and a great problem solver. He’s been my best friend for 20 years.”

Houser began his banking career as a loan officer for Union Safe Deposit Bank and later the Bank of Agriculture and Commerce, both in Stockton.

After Eric completed his MBA in 1997 and was offered the Wells Fargo job in Palo Alto, he and Tammy and their year-old daughter, Madison, made the move to Silicon Valley. 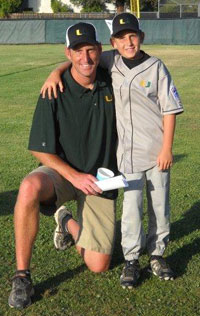 “We were planning to live in Palo Alto, but the day we went to look for a place to live was the day of the Stanford-Notre Dame football game and the entire town was jammed with people and traffic,” he recalls. “So we said forget Palo Alto and we looked around some more until we discovered Los Gatos. We loved it right away, and we still live there.”

The family now includes their sons, Christian, 15, and Riley, 12.

Eric enjoys outdoor activities that include golf, hiking and keeping fit. An avid sports fan, he has become a memorabilia collector, which explains the rare gray Cepeda road jersey, along with a basketball signed by Chris Webber and baseballs autographed by Willie McCovey and Gaylord Perry in his office.

“My baseball card collection goes way back,” he says. ”I saw the Cepeda jersey at an auction and I just thought it would be great to own,” he adds, acknowledging his appreciation for Cepeda’s journeyman work ethic and long journey to Cooperstown.

Now if only there were some notepads and paper clips on the desk.