Growing up in Kabul, Afghanistan in the 1950s and 1960s, Mohammad Qayoumi often worked in his father’s carpentry shop after school and on weekends, learning to make doors, windows, cabinets, chairs and other items.

School was his priority, but few might have predicted that Mo Qayoumi would eventually earn five degrees – four in the U.S. – publish eight books and more than 100 articles, hold top administrative positions at five American universities and be president of two of them.

On the other hand, it wasn’t a preposterous notion, either. Kabul then wasn’t the war-torn city we see today. It was more westernized and education was valued. Qayoumi recalled the era this way in a 2010 issue of Foreign Policy magazine:

“A half-century ago, Afghan women pursued careers in medicine; men and women mingled casually at movie theaters and university campuses in Kabul; factories in the suburbs churned out textiles and other goods. There was a tradition of law and order, and a government capable of undertaking large national infrastructure projects, like building hydropower stations and roads, albeit with outside help. Ordinary people had a sense of hope, a belief that education could open opportunities for all, a conviction that a bright future lay ahead. All that has been destroyed by three decades of war, but it was real.”

Mo Qayoumi was formally inaugurated as San Jose State University’s 28th president in April after a year in office, and he has been a Joint Venture board member since last year. He recalled his upbringing during a recent visit in his Tower Hall office on campus.

Qayoumi’s father, Abdul, and his mother, Habiba, were working class Afghans who had high expectations for Mohammad and his five younger siblings.

“My father was very good in school, but he only had an elementary school education,” says Qayoumi. “He had a deep sense of curiosity. It bothered him that he did not have the opportunity for higher education. He wanted that for all of us.”

Mo took an early interest in electrical and technical disciplines, earning a scholarship to study at the American University of Beirut, where he received his undergraduate degree in electrical engineering in 1975.

Fast-forward 37 years. Now, with two masters degrees, an MBA and a doctorate from the University of Cincinnati and some three decades of administration experience, Qayoumi has a unique perspective on American higher education.

Today, Qayoumi sits at the helm of the oldest public university in California, a vibrant but underfunded urban university, guiding more than 30,000 students and some 4000 faculty and employees through a period when classroom space and budget dollars are both in short supply. 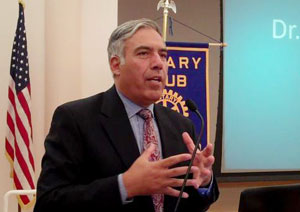 “Higher education is at a very important juncture in the United States,” he says. “We’re falling behind in building a knowledge economy. Public universities are raising fees due to sharp reduction of state funds, thus closing the doors of opportunity for many students.

“I see that to be a major issue for us in the race for talent on a global scale. Technology is changing the role of universities and the body of knowledge required to be successful. This is a major paradigm shift.”

Qayoumi noted that urban regions are playing a pivotal role in education today than in prior decades. San Jose State, he says, can be a new model for stewardship of education in building a local workforce.

“More than fifty percent of our students are local and eighty to eighty-five percent now stay here to live and work. They are defining the future direction of our region.”

A collective approach by academia and the public-private sector to train the local workforce for jobs in the tech economy is why Qayoumi lends his expertise to Joint Venture.

“San Jose State produces more engineers for Silicon Valley than Stanford, Santa Clara and Berkeley combined. A majority of our students are place-bound, meaning they will be looking for local jobs when they graduate and we need to attract businesses that will create the jobs they are looking for. Joint Venture plays an important role in helping with that.”

“Mo is an extraordinarily hard working guy,” said former SJSU president and longtime administrator Don Kassing. “I don’t know how much he sleeps. He is a very good administrator, so comprehensive in terms of what he knows about universities and very progressive in terms of where higher education needs to go.

“Higher education is at a very important juncture in the United States,” he says. “We’re falling behind in building a knowledge economy. Public universities are raising fees due to sharp reduction of state funds, thus closing the doors of opportunity for many students.”

“Silicon Valley will find the agenda that Mo builds will be very progressive and savvy. People will appreciate and enjoy the depth of who he is.”

Kassing added that Qayoumi also has a “wonderful sense of humor. He can make fun of himself in a minute and that’s a good sign in a leader, that they don’t take themselves too seriously.”

Back to Qayoumi’s earlier years for a moment. While studying in Beirut, Qayoumi met Najia Karim, another student from Kabul who would eventually become his wife. A University of Cincinnati graduate who began her college studies in Nebraska, today she is an accomplished poet and clinical dietician at Eden Medical Center.

The Middle East was “booming” when he graduated, he said, and he hoped to stay there, but those plans changed with the outbreak of the Lebanese civil war in 1975.

He spent the next year as a communications engineer for a company in Riyadh, Saudi Arabia, and two more for an international contractor in Abu Dhabi, before emigrating to the U.S. for graduate studies at the University of Cincinnati.

Concurrently, he served as a staff engineer, director of technical services and director of utilities and engineering services at the university.

Qayoumi’s career in administration began in 1986 with the opportunity to join San Jose State as associate vice president for administration.

“I always enjoyed the environment of higher education,” he says. “There’s a sense of optimism about it, a seasonality. Every year there’s a new class, an excitement that doesn’t exist in other industries. The access to libraries, experts, activities and culture – I saw a rich quality of life in it.”

After ten years, Qayoumi left San Jose in 1995 to become vice chancellor for administrative services at the University of Missouri-Rolla for five years before returning to California as vice president for administration and chief financial officer at CSU Northridge. He was also a tenured professor of engineering management at CSUN.

He remained at Northridge until 2006, when he became president of CSU East Bay, where he also taught engineering. He held that post until San Jose State came calling.

“As a university president in today’s dynamic environment, Mo is absolutely masterful at transformational change,” said Dr. Barbara Kaufman, a nationally recognized educational consultant who has worked with Qayoumi over the past ten years.

“He is passionate, extraordinarily strategic, and envisions a bold future. And he does it faster than anyone can imagine considering the normal pace for educational institutions. Mo ran 49 focus groups in three months. People who work with him talk about being on ‘Mo Time’ because of his work ethic.” 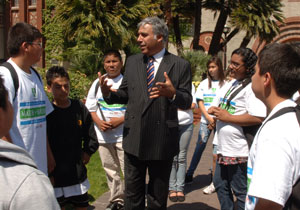 A branding phrase that emerged from his research into San Jose State’s impact on the region was “Powering Silicon Valley,” Kaufman added. “It’s something people can rally around.”

Along the way during his prolific career, Qayoumi has churned out an extensive list of books and papers, amassed numerous industry and community honors, served on dozens of professional and civic boards, associations and organizations, and gave keynote remarks and presentations to a broad spectrum of audiences.

He also has served his native country in various capacities, including as senior advisor to the Minister of Finance of Afghanistan and on the board of directors for the Central Bank of Afghanistan.

Qayoumi spends his recreational time reading, writing, listening to music and traveling. He and Najia travel as often as possible, in search of the “joy of discovery” that travel brings.

And he still dabbles in the occasional woodworking project. Qayoumi may be 7,400 miles from the site of his father’s old carpentry shop, but it’s always close to his heart.