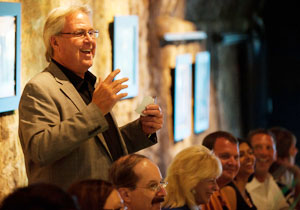 When Bill Sherry was sixteen, a flight instructor at a small Florida airfield treated him to his first ride aloft in a small private plane. You could say that Bill never came down from that.

“It was a four-seater,” he remembers. “I sat in the left front seat. I was hooked. I fell in love with flying that day.”

Within a year, Sherry earned his private pilot’s license, followed by his commercial license the year after that, both at the youngest age allowed by law. Soon he had a job flying tourists around the Bahamas and business clients all over the southeast.

“My dream was to be a commercial airline pilot, but by 1978, when Congress deregulated the industry, there was a glut of pilots and the prospects weren’t as promising,” Sherry recalled the other day in his office at Mineta San Jose International Airport.

Instead, he found a life and career in aviation by ferrying clients, teaching other pilots, studying business finances and real estate, and learning eventually to manage, rebuild and grow airports.

Since 2005, Sherry has been aviation director at Mineta, overseeing a $1.3 billion upgrade and now working on what he calls “air service development,” industry speak for getting more flights to more destinations.

At the same time, he is CEO of Team San Jose, the public-private partnership that manages the San Jose Convention Center and arts and entertainment venues including the California Theatre, the Center for the Performing Arts, Montgomery Theater, Parkside Hall, San Jose Civic and South Hall.

Both positions suit him ideally for third role, his membership on Joint Venture’s board of directors.

“Joint Venture plays an important role in generating awareness of Silicon Valley and education about its benefits to businesses, residents and visitors alike."

The challenges Sherry faced in 2009, just as the recession was taking hold, were mounting. Oil prices soared to $140-150 per barrel, forcing airlines to ground old planes and consolidate hubs, cutting 30-35 percent of capacity.

“A spike in fuel costs touches every aspect of our lives,” Sherry says. “The cost of everything goes up. Small and medium airports took it on the chin. San Jose and Oakland became the poster children for the immediate loss of service.”

San Jose’s airport project had already taken off, so Sherry had to drastically cut personnel and expenses to offset the budget drag.

“We had to cut fifty percent of our employees,” he says. “We now have 200 people doing the work of 400. And we cut half of our operating expenses.”

Sherry brought the five-year airport project in at $160 million under budget and on time, parts of it even six months early. Now the focus shifts to adding flights.

“We have to grow our way out of the recession,” he says. “I am extremely bullish on this airport. We are in an area of 3.5 million people in the technology center of the country with high per capita income. We are in an enviable position for growth.”

He is in active discussions with international and transcontinental carriers. “SFO has 38 daily nonstop flights to the New York metro area. San Jose has one – and it’s a red-eye,” Sherry notes. One growth area has been Hawaii. Last year San Jose offered seven flights a week to one island, and now there are 40 weekly flights to four islands. 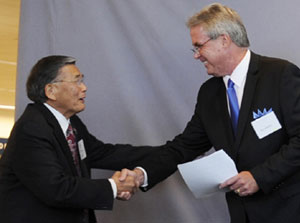 Switching hats, Sherry is directing a $120 million renovation and expansion of the McEnery San Jose Convention Center, adding 125,000 square feet of new meeting and ballroom space, bringing the total to 550,000, and upgrading the facility throughout to accommodate more conferences and convention business.

“Bill really sees the big picture,” says Michael Mulcahy, managing partner of SDS NexGen Partners and the incoming board chair of Team San Jose. “He knows what’s important and how to prioritize.

“Bill created a project in partnership with all the stakeholders and came up with a program everybody is incredibly excited about. He’s had to balance how to utilize those dollars in the framework of the expected delivery time. Bill was the right guy at the right time and place.”

Sherry says that for the past two years his team has hit seven of nine performance measurements and returned $1.8 million to the city.

“I am very comfortable that we will be able to finish on time in September 2013. In fact, I am sure we’ll finish by the second week of September.”

How can he be so sure? Because that’s the week Sherry is planning to retire. “Right after the ribbon-cutting,” he says. He is working with city officials now on finding his replacements. “I want a smooth transition,” Sherry adds.

He was born fifty-seven years ago in Philadelphia to Bill and Winifred Sherry, and grew up with his older sister and younger brother in New Jersey, Boston and Detroit while his father managed radio and television stations.

When Sherry was fourteen, the family moved to Fort Lauderdale, where Bill’s father managed station WFTL.

“My dad always had these advertising trade deals and we’d get tickets to sports, concerts and shows,” Sherry says. “One day he came home with a trade deal for flight instruction from a small aviation company. That’s when I took my first flight.”

A few years later, while Sherry was working as a flight instructor for Aerosun Aviation in Fort Lauderdale, a young woman walked in one day and asked for flying lessons. Her name was Lee Bennett, and soon their hearts were airborne. Their relationship grew over the next three years and Bill and Lee were married in 1981. They have a son who is an attorney in Miami.

During that time, Bill finished his aerospace technology degree at Broward Community College and went on to earn his bachelor’s degree in accounting and finance at Barry University, a small private school in Miami Shores.

He spent four and a half years working with Arthur Anderson consulting and learning real estate development. His background in flying, finance and real estate converged ideally in 1987 when he seized an opportunity to become the assistant airport director in Vero Beach.

“It was an old World War II Navy base in a small coastal town known mostly as the Dodgers’ spring training home,” Sherry recalls. “I was there nine years. We rebuilt every piece of infrastructure – runways, taxiways, the terminal, the roads, everything. It was a great learning experience.”

Vero Beach was a springboard to a brief term as assistant city manager of Vero Beach, then to the Florida Department of Transportation where Sherry served as director of aviation and traveled frequently to Washington, D.C., for meetings with Congressional leaders and airline industry officials.

Sherry later returned to Fort Lauderdale to run the airport in a community attempting to shed its unsavory reputation as the rowdy Spring Break capital of the county, which was souring the travel and hospitality business.

“We have to grow our way out of the recession,” he says. “I am extremely bullish on this airport. We are in an area of 3.5 million people in the technology center of the country with high per capita income. We are in an enviable position for growth.”

“Again, I was at an airport that the city wanted totally rebuilt. It was exactly what my career had prepared me to do. We renovated it completely, including four terminals, three large parking garages, and new entrance roads.” Sherry was also able to increase traffic from nine million passengers to 18 million, making the airport the fastest growing large-hub airport in North America.

By then, Sherry was “burned out” from seven-plus years of 60-to-70-hour weeks, so a break was in order. He and Lee closed up the house, boarded their 38-foot Tiara fishing yacht, the Panasea-Ah, and sailed around the Bahamas for months on end.

“Did you know there are 3,000 islands in the Bahamas and less than ten percent of them are inhabited?' he asks. "We told ourselves we had to ‘work’ every three days, meaning we would have to fish for food. When the cooler was full we pulled into a cove and dropped anchor until the fish were gone.”

This mini retirement ended when Sherry heard about the San Jose job and applied. “We used to kid about getting a job out here in the Bay Area,” he says. “Then suddenly it was real.”

When Sherry retires for good, he won’t be spending all his time lolling on a boat in the Caribbean, although some of that is still on the agenda. He and Lee also have a motor home they enjoy.

“And I have a long list of things I want to do,” he says. “I want to improve my golf game, get into woodworking, learn to play the guitar…”

And then there is his passion for his Harley Davidson, which he frequently rides on weekends with real estate developer and construction company owner Chuck Toeniskoetter, the former chair of Team San Jose.

“Bill is a very unusual person,” says Toeniskoetter. “In many ways he’s an entrepreneur, which you don’t find in the public sector very often. He is extremely well versed and a very good manager.

“You learn a lot about somebody when you’re out riding motorcycles together. You can meet anybody anywhere and it doesn’t matter what you do or who you are. When you are on a Harley, you are all the same. That’s the culture.”

One thing Sherry won’t be doing when he retires is piloting a plane. Sherry stopped flying in the mid-1980s, owing to his workload. But he will never forget how that first plane ride changed his life forever.