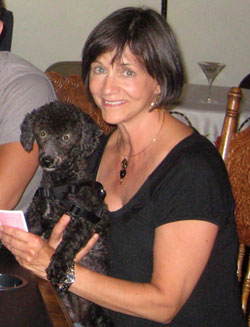 Mark Twain probably didn’t have public infrastructure projects in mind when the main character in his best-known novel tricked Huck Finn into whitewashing Aunt Polly’s fence for him.

But Corinne Goodrich, who’s been recruiting community support up and down the Peninsula for Joint Venture’s Grand Boulevard Initiative, made the connection, naturally.

“I’m Tom Sawyer,” says Goodrich, the indomitable force behind Grand Boulevard, with a wink. “The whole thing about getting other people to step up and do this work is convincing them how much fun it is.”

“I’m always trying to think about how we’re going to engage the task force members and get them involved. We’ve spent the past two years bringing in advocacy and nonprofit organizations – entities that have a voice in the community.”

The Grand Boulevard Initiative, launched by Joint Venture and SamTrans in 2006, is a collaboration of public, private and nonprofit organizations dedicated to revitalizing the El Camino corridor in San Mateo and Santa Clara counties.

The project is unique, Goodrich emphasizes, in that it is not a legal entity but a “coalition of the willing.” All of the people, jurisdictions and organizations that participate in it do so voluntarily, a main reason for its success.

“My approach with Grand Boulevard has been to push the needle to get the right people and funding,” says Goodrich. “Joint Venture is important because it gets the right people around the table, people who care about improving the quality of life here.”

“We can’t tell people what to do,” says Goodrich. “We only have the Grand Boulevard Guiding Principles and we must rely on those who recognize the common good and the value for the community, government and business.”

The initiative has succeeded in landing $8.6 million in grant funds and numerous awards.

The Tiger II grant provides funds to develop strategies for removing barriers to implementation of the vision for Grand Boulevard. It focuses on three specific areas: designing El Camino as a “complete street” with walkable urban nodes, conducting studies for understanding the effects of the corridor-wide development pattern and streetscape enhancements, and developing a strategy to provide and finance the infrastructure to accommodate the desired density and intensification.

Project for Public Spaces is a nonprofit organization that helps create and sustain public spaces that build stronger communities. CEO Fred Kent is a leading authority on revitalizing city spaces and one of the foremost thinkers in livability, smart growth and the future of the city.

It was Kent who came up with the name Grand Boulevard, says Goodrich. “But then we needed buy-in from cities and other entities. Congressman Tom Lantos helped us get a $3 million grant to launch the project. We hired staff and started the planning. It was the first project of its kind for SamTrans.” 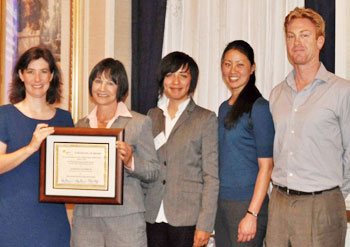 Goodrich and other officials later met with Joint Venture CEO Russell Hancock, who posed the question why Santa Clara County cities were not included with San Mateo County. That led to expansion of Grand Boulevard as a bi-county project in early 2006, linking what Scanlon has called “a string of pearls” from Daly City to San Jose.

“My approach with Grand Boulevard has been to push the needle to get the right people and funding,” says Goodrich. “Joint Venture is important because it gets the right people around the table, people who care about improving the quality of life here.”

“Corinne has extensive planning experience and insight, so she is technically qualified, as most planners are,” said Mike Garvey, an independent consultant to SamTrans and the longtime San Carlos city manager. “What makes her different is her innate sensitivity and respect for each city to make decisions that are best for their particular community. It is the essence of what makes Grand Boulevard successful.”

Goodrich learned the value of quality of life growing up in Fairfield, Connecticut as one of five children of a family doctor, William Goodrich and his wife, Geraldine.

“I didn’t want to go to college at first,” Goodrich recalls. “It seemed to me that the only options for a woman back then were to be a teacher, a nurse or a secretary.

“But when I got to D.C. the Vietnam War protests were everywhere, and they completely changed me. I majored in political science.”

A friend convinced Goodrich to head west for grad school at UCLA, where she developed a growing interest in public service systems and transportation, earning her master’s degree in urban planning.

A friend convinced Goodrich to head west for grad school at UCLA, where she developed a growing interest in public service systems and transportation, earning her master’s degree in urban planning.

Goodrich was offered a job with the state health department in Sacramento but instead migrated to the Bay Area and landed a job as a planner at the Metropolitan Transportation Commission.

Those duties put her in frequent contact with the Association of Bay Area Governments, where she met her future husband, Michael Visconti.

Today Visconti is the north airport property manager for the Port of Oakland, and the couple has three children, Michael, an attorney, Adam, a student at the UCSF medical school, and Katherine, a journalist in the Philippines.

After six years with MTC and two promotions, Goodrich left when her first child was born and joined her husband in developing a 19-acre mixed-use project in Sonoma County. When a pre-school tenant backed out of the project, she developed and directed a Montessori preschool that operates today.

Goodrich first came to SamTrans in 1991 as an administrator with the multi-city TSM Agency. Under a first-of-its-kind grant from the Bay Area Air Quality Management District, Genentech consolidated its shuttle to Caltrain with two other office centers and expanded service to BART. Goodrich went on to create five more multiple-employer shuttles.

She continued performing a variety of transportation studies, long-range planning, auditing and evaluation with consultant Crain & Associates from 1993 to 2001, when she became the strategic and long range planning manager for SamTrans.

“Corinne is very passionate about her work and what’s remarkable is that she has left a legacy, really made a mark on society,” said Darlene Marvin-Nilsen, Goodrich’s close friend of thirty years.

Over the years the two have shared symphony and theatre tickets and family vacations to Yosemite and enjoyed concerts, book clubs and other activities together. 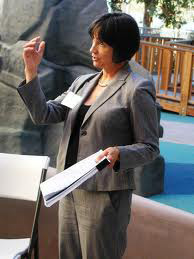 “I like her because she has a very social conscience,” added Marvin-Nilsen, senior manager of base maintenance support services for United Airlines at SFO. “She really cares, has strong moral fiber and is also very inquisitive around people.”

In addition to Grand Boulevard, Goodrich currently manages the Senior Mobility Initiative, a collaboration of public and nonprofit entities throughout San Mateo County to develop and implement mobility management services for seniors and persons with disabilities, which has been awarded more than $700,000 in regional funding.

In other words, funding for new ways to show more people how much fun it can be to pick up a brush and help Goodrich to paint her 50-mile-long fence.