Growing up in Washington, D.C. as the son of an environmental lawyer in the Carter Administration, it was years before Daniel Yost realized that his wasn’t a typical urban childhood.

“I eventually figured out that most kids don’t get to roll Easter eggs on the White House lawn,” Yost says with an engaging smile.

Nor were most kids exposed to the equivalent intellectual level of dinner table talk about national news, politics and public service, a by-product of Yost’s upbringing that gave young Daniel an abiding interest in community involvement.

Today Yost is a partner in the marquee Silicon Valley law firm of Orrick Herrington & Sutcliffe, serves as chair of the Woodside Planning Commission and has been a board member of Joint Venture since 2007.

“We were a small office when I first came here, maybe twenty attorneys,” Yost recalls. “It was the peak of the dot com boom. Now we have 110 attorneys.”

“If Joint Venture didn’t exist here, someone would need to invent it,” he says. “It’s the ideal body, for instance, that could champion a bike trail from San Francisco to San Jose, a dedicated path that could get a lot of cars off the road.”

“Daniel is one of most level headed people I ever worked with, both in his relationships with clients and colleagues,” said Brian Day, an attorney who worked with Yost at Orrick for two years before leaving last summer to join Paramount Pictures’ legal staff in Hollywood. “He showed grace under pressure, a quality I think is rare, especially in a large law firm.

“Daniel was also involved in a number of outside organizations and community groups and he encouraged me to participate as well, to take time to go out cultivate those relationships. And he also invited me and others from the office to his home to socialize.”

Founded in San Francisco in 1863, Orrick is the oldest continuously operating law firm in the city and today has more than 1100 lawyers in 25 offices worldwide.

“Orrick combines a global, international platform with in-depth experience working with Silicon Valley companies and startups,” says Yost, adding that the firm has been on the leading edge of recent trends in technology and regulation such as privacy issues, ‘so-lo-mo’ (social-local-mobile) location-based services and clean-tech.

“These things weren’t on most people’s radar a decade ago,” says Yost.

Yost’s lifelong passion for community engagement brought him to Joint Venture when he found that so many regional challenges are “cross-border issues” that require collaborative solutions.

He is particularly interested in transportation-related matters, having endured the commute from San Francisco for a few years before moving to Woodside.

“If Joint Venture didn’t exist here, someone would need to invent it,” he says. “It’s the ideal body, for instance, that could champion a bike trail from San Francisco to San Jose, a dedicated path that could get a lot of cars off the road.” 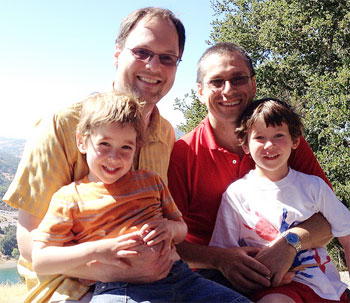 “Daniel is incredibly conscientious, both at work and on a personal level,” says his friend Andrew Byrnes, an attorney with Covington & Burling in Redwood Shores, who served with Yost on the board of the San Mateo County Democratic Party.

“He always asks how is something we’re doing is going to affect people and how we can engage the maximum number of people. What has been inspirational to me is his ability to be so active in his legal practice and in his community and still maintain that personal commitment of spending meaningful time with his family.”

Yost was born in Santa Monica in 1972 to Nicholas and Miriam Yost. At the time, his father headed the environmental unit in the office of California attorney general Evelle Younger and his mother was a psychiatrist. They divorced soon afterward and his father later remarried Sandra Rennie, an environmental mediator.

After a brief move to Hillsborough and later Los Altos, the family moved to Washington when Daniel’s father became General Counsel for the Council on Environmental Quality under President Carter.

“For someone with many interests there was a lot to like there,” he says. “I was in lots of activities – co-captain of the football team and wrestling team, editor of the literary and visual arts magazine, school plays. Of course, with such a small student body, there was always room in sports and clubs.”

It was at Maret that Daniel first began to understand that he was gay, he says, and when it came time for college he gravitated back to California to enroll in the University of California at Santa Cruz.

Through a close friend who served as the egg donor and two surrogates to carry the pregnancies, the couple had two sons, Andrew in 2008 and Oliver in 2009, one fathered by Daniel and one by Paul.

“I had two majors, Economics and American studies, and I started a housing co-op with three other students,” recalls Yost. “By the second year there were 13 of us, and eventually we bought a big old Victorian for 23 people on Beach Hill.”

After graduating from UCSC with highest honors in Economics, Yost spent a year at Oxford University on a Fulbright scholarship before returning to the Bay Area for law school at UC’s Boalt Hall in Berkeley.

He began his law career at Orrick’s offices in San Francisco in 1998 and took an apartment in the Mission District.

At a Halloween party in the Castro District a year later, he met Paul Brody, a supply chain consultant in the electronics industry who would become his life partner.

“It must have been love because I gave up my rent-controlled apartment to move into a South of Market loft with Paul in 2001,” says Daniel. “In 2003 we bought our house in Woodside and made the move down here.

“I’ve actually been married three times – all to the same guy,” laughs Yost. “We were domestic partners, then had a large ceremony in 2004 and again in our back yard in Woodside in 2007 during the window for same sex couples to legally marry.”

Assemblyman Rich Gordon officiated at the last ceremony, cementing the relationship to the point where Daniel and Paul began seriously contemplating fatherhood.

Through a close friend who served as the egg donor and two surrogates to carry the pregnancies, the couple had two sons, Andrew in 2008 and Oliver in 2009, one fathered by Daniel and one by Paul. 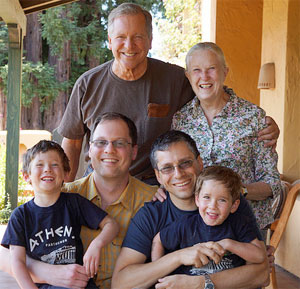 “It was complicated,” says Daniel. “I’m a lawyer and Paul is a supply chain expert, and we definitely needed both skill sets to make it happen.”

Daniel still laughs about getting stopped by police for speeding in the car on the way to the hospital before Andrew was born.

“I was trying to explain to him that Paul and I were the parents, and we were driving to our son’s birth and the officer finally just threw up his arms and waved us on without a ticket.”

It’s safe to say that someday Yost’s sons will no doubt realize their childhood was as atypical as their dad’s.