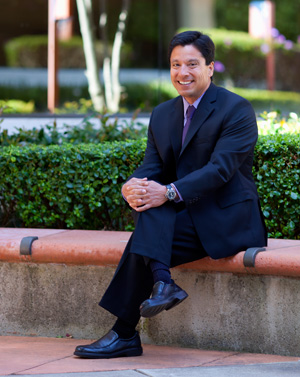 Some boys want to be firemen, cops, athletes or astronauts. But how often do you meet someone who says he knew coming out of high school that his career goal was to be a city manager?

If that sounds unglamorous, you don’t know Fred Diaz.

Diaz, Fremont’s City Manager since 2004 and city manager of Tracy for ten years before that, grew up in the world of public service in southern California as the son of a local community official who also served as a city councilman and mayor.

“This is the perfect job for me,” Diaz said during a recent visit in his Fremont office. “I always knew what a city manager was. I knew I could build a life in local government. That appealed to me. I thought it was a cool career path to pursue.”

Diaz today presides over a vibrant and growing southern Alameda County community of 218,000 people with 840 municipal employees and a yearly budget of $133 million. The fourth largest Bay Area city, Fremont is home to more than 1200 high tech, clean tech and life sciences companies, including Tesla Motors and its 2700 local employees.

Diaz also joined Joint Venture’s board of directors last June and serves on the Davenport Institute for Public Engagement and Civic Leadership, affiliated with Pepperdine University’s School of Public Policy.

The past few years have been difficult, he said, coping with city worker salary reductions, higher workloads, labor union negotiations and other measures to remain “fiscally sustainable,” but “we righted our ship.”

“The future looks much better than a couple of years ago,” says Diaz, whose attention is now focused on two major initiatives for Fremont – creation of a new downtown center and planned development surrounding the Tesla Motors property and the adjacent Warm Springs/South Fremont BART Station currently under construction.

The 110-acre downtown City Center envisions a mix of housing, offices, shopping, dining, entertainment and other uses that take advantage of the proximity to the Fremont BART Station and that draw residents and visitors alike.

“A downtown can be the heart and soul of a community,” says Diaz. “Fremont doesn’t have that, and this community deserves a place where people can come to connect and celebrate.”

Envisioned primarily as a regional commercial center, employment center, and entertainment and cultural center, it also includes a new city hall and civic center. Diaz hopes development can begin in the next 18-24 months, with build out in 10-15 years.

“Tesla is the centerpiece of this property that we’re working to rebrand as advanced manufacturing near BART,” says Diaz. “Union Pacific Railroad purchased a large portion of the property and was planning to make it a rail yard, but we went to Omaha and were successful in persuading Union Pacific CEO Jim Young to change that so we can make it a more job-centered development. This development could employ twenty thousand people.”

“He has the ability to bring the best out in people.”

“Fred’s understanding of Fremont and the regional significance of the land use decisions we make is wonderful,” said Fremont vice mayor Anu Natarajan, who joined the city council shortly after Diaz began working there.

“He knows a lot of it is teamwork and he has been able to go out and get the best team to support him. He enables his team to do a lot of the thinking. He communicates well and listens to ideas. It’s not a linear process. He has the ability to bring the best out in people.”

The growth of Fremont as a tech center, home to such leading companies as Seagate, Western Digital, Boston Scientific, Solaria and LAM Research, motivated Diaz to join Joint Venture’s board last year.

“I saw it as a sound, objective and enlightening source of information about the region,” says Diaz. “It’s unbiased, without politics or lobbying and it has the most credible leadership. For me, to be on the board and have that much cachet is extremely important.”

“It’s great to be part of fixing problems regionally. Fremont is so different from the rest of Alameda County, which most people think of as Oakland and Berkeley. Historically, the north county always seems to get more of the resources.

“But Fremont is very results-oriented and encompasses more of the entrepreneurial spirit of Silicon Valley.”

“Fred is a visionary who sees the big picture, but at the same time he is also very hands on,” says Kelly Kline, who became Fremont’s economic development director a year ago. “Fremont is at an interesting place in its history, a critical turning point in its transformation to a strategically urban city.

“Fred is the quintessential Silicon Valley public sector executive,” she added. “He is fast-paced, surrounds himself with diverse opinions, and does not hesitate to make a decision. He has a strong desire to produce results.”

Diaz grew up in Pico Rivera, a working class Hispanic suburb 25 miles south of Los Angeles, where his father, Louis, was executive director of the Variety Boys and Girls Clubs for forty years. He was also elected to the city council and served as mayor.

Fred’s mother, Alice, was a stay-at-home mom until she went back to college at the age of 40, earned degrees in art and Spanish, then taught at Bassett High School in La Puente for 25 years.

He has two brothers, Louis Jr., a retiree living in Seattle, and Charles, an attorney in Los Angeles.

“My parents gave me a good rudder – good values and a strong sense of public service,” says Diaz. “I went to Loyola High School, an all-boys Jesuit school that is the Bellarmine Prep of Southern California … or maybe it is the other way around!”

“I saw it [Joint Venture] as a sound, objective and enlightening source of information about the region,”

During college Diaz worked at his father’s Boys and Girls Club and spent two summers binding stacks of phone books at a printing subsidiary of the Los Angeles Times Mirror Company.

His first job after leaving Fullerton was interning in the Montebello city manager’s office for three years before returning to his hometown as an administrative analyst in the Pico Rivera public works department. That led to an assistant city manager’s post, followed by the same role in Azusa, where he worked under city manager Julio Fuentes, now the new city manager of Santa Clara.

In 1990, Diaz landed his first city manager’s job in the desert community of Indio, which he describes as his first “test under fire” managing the day-to-day challenges of the position.

After four years there, Diaz took the city manager post in Tracy, where he spent ten years before making the switch to Fremont in 2004.

Creating a work-life balance is something Diaz strives to do. He shares custody of his daughter, Alana, 14, with his former wife. Alana is a student and soccer player at Notre Dame High School in San Jose.

Diaz runs daily, working in five or six miles at lunch or after work, often along the Alameda Creek Trail, and has run in some two dozen half-marathons. Lately he has incorporated his love of reading with running, listening to audio books along the route.

All that running can make a guy hungry, and Fred enjoys cooking for himself. “It’s a real stress reducer for me, a creative outlet where I can tune out the world and just concentrate on preparing a meal.” 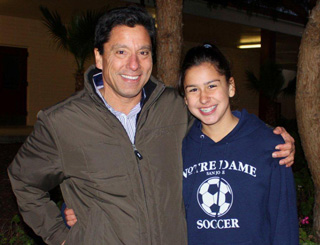 Diaz also spends time cooking with Alana as well as skiing, watching movies and exercising – Fred running and Alana alongside on her bike. He’s also a frequent spectator at her soccer games. “It’s a joy to watch her play,” he says.

“I’m really enjoying watching her grow and seeing her develop an awareness of her environment and the people around her,” he says proudly.

Asked if his daughter has shown any signs of following in her dad’s footsteps as he did in his father’s, Fred says Alana has not expressed interest in city management – yet.

“But she has all the right leadership traits and then some,” he says with paternal pride. “Stay tuned!”