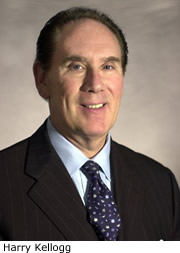 Joint Venture co-chair Harry Kellogg’s favorite breakfast – oatmeal, bacon, wheat toast, and OJ – may be the most famous meal in the area. When the Wall Street Journal listed Silicon Valley’s best locations for power meetings, it was Harry’s picture, along with his breakfast, that they chose to epitomize power dealing in the Valley.

“I’m a breakfast guy,” he says somewhat sheepishly about his notoriety, “and I guess over the years I’ve done a lot of deals at places like Il Fornaio, Buck’s and the restaurant at 3000 Sand Hill Road.”

A lot of deals indeed.

As Vice Chairman of Silicon Valley Bank, Chairman of SVB Capital, President of SVB Private Client Services and the Wine Division, he sits at the epicenter of deal making in Silicon Valley. He numbers as his clients Cisco Systems (“We gave them their first $50,000 line of credit, and they’re still with us today”), Kleiner Perkins and Sequoia Capital.

Harry joined the Joint Venture board three years ago. “I’d been aware of Joint Venture ever since the very beginning at a 30,000 foot level,” he recalls. “When Russ Hancock approached me about joining, I liked his vision and readily agreed.”

Harry’s background in venture capital made him a natural fit for the organization. “The notion of civic entrepreneurship is entirely consonant with my view of the world,” he points out with emphasis. “Joint Venture introduces ideas and puts them into practice, sort of like an EIR (entrepreneur-in-residence) in venture capital. Some pan out, some fail – just like in the real world. This organization has become an essential part of the Silicon Valley economic ecosystem, along with our great universities, our VCs and our highly skilled labor force.”

He points with pride to several accomplishments during his tenure. “The State of the Valley has become an annual centerpiece in defining the direction the Valley is headed. The Silicon Valley Index is very high quality – I can’t tell you how many copies I’ve sent to friends and business associates. And many of the initiatives have helped us to continue as a unique region. I’m particularly excited about Wireless Silicon Valley – it’s not easy but it has a great chance of success, and it will define our global leadership if we pull it off.”

“The notion of civic entrepreneurship is entirely consonant with my view of the world. Joint Venture introduces ideas and puts them into practice, sort of like an EIR (entrepreneur-in-residence) in venture capital. Some pan out, some fail – just like in the real world. This organization has become an essential part of the Silicon Valley economic ecosystem, along with our great universities, our VCs and our highly skilled labor force.”

When he isn’t making power deals over breakfast, Harry is an avid reader, currently favoring the murder mysteries of James Patterson. And his leadership of the Silicon Valley Bank Wine Division has inevitably pushed him into amateur oenology. “We have banking relationships with 280 premium and ultrapremium wines,” he explains. “We didn’t realize how many VCs are involved in the wine industry, but our work in the wine business has helped enrich many of our business relationships. The only problem is, after you’ve tasted an $850 bottle of wine it’s hard to go back to the cheap stuff.”

His job has also brought him to every corner of the world, and he has enjoyed experiencing the places he has been. His favorite travel destinations include London, where SVB has an office; Shanghai (“an absolutely vibrant place”) and Israel (“more like Silicon Valley than any place I go”).

He also finds time to be involved in many civic and industry organizations. “I want to make a difference in the community,” he says, “and this is a good way to do it.” Among the organizations in which he is involved are TechNet, Stanford Institute for Economic Policy Research, and the California/Israel Chamber of Commerce. He is also on the Board of Trustees of Menlo College and an International Council member of INSEAD. He was named one of Upside Magazine’s “100 People Who Changed Our World.”

As he looks into the future, Harry sees two trends that will overshadow others in shaping the economy and quality of life in the Valley: the aging of the Baby Boomers and the Clean Tech movement.

“As the Boomers get older, life sciences and medical services will take center stage. The opportunities this creates for new medical equipment, pharmaceuticals, and information technology are huge,” he predicts. “And the condition of the environment means that it is very important for the US to lead in clean technology.” He has been to Washington, DC several times over the last year, and believes Congress is beginning to “get it” about security, air quality and carbon emissions.

He points out that Joint Venture is already anticipating these trends with their Smart Health and Climate Protection projects. “I’m excited about the potential these projects have to once again demonstrate Silicon Valley’s leadership on tough problems,” he says with obvious enthusiasm.

Whatever the future of Silicon Valley, it is likely to be consummated over a breakfast of oatmeal, bacon, wheat toast and OJ.