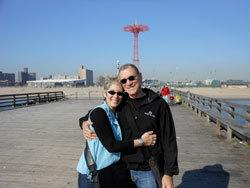 How many economic development directors does it take to eat fire, sing in a chorus and rappel down a 15-story building?

Just one, if we’re talking about Bruce Knopf.

Don’t worry, he doesn’t engage in all three at once. And none of that is in his Santa Clara County job description, but a little showmanship in his off hours helps Knopf to even the keel of his demanding day job.

A daredevil actor, singer and community activist who grew up in Hollywood, Knopf most relishes his leading role as director of asset and economic development for Santa Clara County.

Knopf is responsible for implementing the county’s regional economic development in collaboration with 15 cities, community organizations and workforce training, educational and nonprofit institutions.

“We have two economies here,” he says. “The people in high tech and the clean tech economy are doing well, but the poor are getting poorer and not being pulled along by the recovery.”

Things have changed dramatically since 2009, he says, when the recession slowed things to a crawl.

“Now brokers and developers are calling again constantly, looking for office space and property. Construction jobs and services are starting to ramp up again. But small business in the county is still looking for an improved business climate.”

Knopf thrives on the challenge of bringing together people and communities to secure commitments of resources in a “constant process of stretching what we’ve got.” 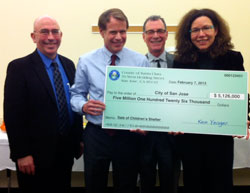 “This is what we saw when I hired Bruce in 2009, someone with a very collaborative and positive attitude who works well with people,” said Gary Graves, Santa Clara County’s Chief Operating Officer.

“Economic development was a somewhat new area for the county, but the board and the administration felt it could have a positive impact and Bruce really filled that role, Graves added. “He’s persistent in terms of getting out there and creating relationships that are positive and beneficial to the county.”

In addition to commercial property management, major projects consuming Knopf’s time these days include the Civic Center Master Plan, rebuilding the County Fairgrounds facility and reuse of the balance of the property after the County completes its clinic at the site of the former Downtown San Jose Hospital.

Since coming to the county from a consulting project and the Catellus Development Group, he has negotiated multiple high-profile stakeholder agreements as well as the $25.5 million sale of the former County Children’s Center and the $10.75 million sale of a county health clinic, twice the county minimum price.

He also has responsibility for the federal base closure and land transfer process for the Private George L. Richey U.S. Army Reserve Center.

“At Catellus I learned how different the private sector is,” says Knopf. “I like the public sector better, the collaborative vision of it. I like figuring out who I need to bring into the process and who can lend support. It’s what I really enjoy doing.”

Joint Venture has enjoyed the same benefits of Knopf’s hard work as chair its Silicon Valley Economic Development Alliance for the past two years.

“[At Joint Venture] we collaborate to strengthen the business climate in the region.”

“It’s been important to me to fill that role,” he says. “It provides the opportunity to interact with economic development directors and managers in other cities to trade best practices and coordinate interests. We collaborate to strengthen the business climate in the region.”

“It was clear immediately that he is the consummate ‘connector,’” said Kris Stadelman, director of the NOVA Workforce Investment Board, for whom Knopf also acts as a member of the Board of Directors. “He has introduced us to numerous County departments and initiatives as well as community organizations and businesses, always seeing the connections for NOVA in the larger environment in which he travels.”

“And he works hard for NOVA and other community groups, not just on our Board committees but in every role he undertakes including acting as a NOVA spokesperson, vetting new Board Members, as a panelist for our micro enterprise grants or Judge for the Silicon Valley StartUp Cup, a business entrepreneurship competition. His vision for the community is broad, his outlook is optimistic and his advice wise and spot-on. What else could you ever ask for in a Board member?”

Knopf and his younger brother, David, were born in Los Angeles and grew up in the Silver Lake/Echo Park area. He attended Hollywood High School, although when asked to name his star classmates the best he could come up with was “Morey Amsterdam’s nephew.”

At 16, after reading future Supreme Court Justice Oliver Wendell Holmes Jr.’s 100-year-old book, “The Common Law,” Bruce decided he would become a lawyer, saying, “It convinced me of the importance of the legal system in this country as a way in which civilized society solves conflict.”

After two years at Los Angeles City College, Knopf transferred to UC Berkeley, where he earned his undergraduate degree in civil engineering with a specialty in structural engineering, and changed his mind about a legal career.

“I remember getting out of the shower one morning and telling myself, ‘I’m not going to law school’,” Knopf says. “I was always good with math and science, both of which are analytical, and much of the law is analytical, but I simply decided that I would rather work more with people than the law,” he says.

“His vision for the community is broad, his outlook is optimistic and his advice wise and spot-on.”

Instead, he enrolled in graduate school at the University of North Carolina at Chapel Hill to study regional planning. “I wrote my master’s paper on economic development and how communities attempt to solve their economic and social problems.”

Knopf began his career as a civil engineer for Alameda County for three years before moving to Chapel Hill, North Carolina, where he earned his master’s degree in regional planning while working as a government planner.

Then, in 1983, he moved to Israel. “I wanted to live on a kibbutz,” he says. He eventually took a job as a plant engineer with Maggi Industries at the Kibbutz Yasur and remained there until he returned to the U.S. in 1987 to become an economic specialist for the U.S. Department of Housing and Urban Development, Region IX, in San Francisco.

From 1990 to 2006, Knopf held positions as Economic Development Manager and later Redevelopment Manager for the City of Alameda. He led the ten-year downtown revitalization project for the city and guided numerous public and private developments, projects and programs to improve the economic climate in the community.

Before taking his current post, he served the City of Concord as Project Manager for reuse planning for the 5000-acre former Concord Naval Weapons Station.

It may have been his Hollywood upbringing that gave Knopf a flair for performing and musical theatre. He sang with the Berkeley Bach Community Chorus while at Cal and has performed with the Festival Opera Chorus in Walnut Creek for years.

Knopf also loves to act and was performing a few years ago in a local production of the Broadway show “George M!” when another actor who portrays a fire-eater had to miss a week of shows.

“I volunteered to fill in,” Knopf said, and he took a crash course in the trick, which he has since performed in local charity fundraising events. “I do draw the line, however. I don’t put lighter fluid down my throat and actually breathe fire, I only eat it.” 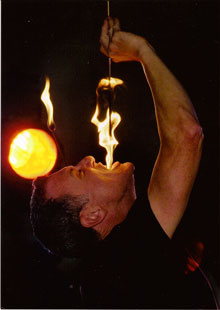 Knopf, whose mother died of ALS in 1999, is also an active supporter with his wife, Kathy Moehring, of Breathe California, a nonprofit organization dedicated to reducing lung disease, as well as Alameda Family Services, the Alameda Education Foundation, the Boys and Girls Clubs of Alameda and Meals on Wheels.

Two years ago, he and his stepdaughter, Remi, rappelled down the outside of the Hyatt Regency Hotel in Santa Clara from the 15th floor as part of the Breathe Extreme Challenge fundraiser.

Knopf also has two sons from a previous marriage, Noam and Ronen, a stepson, Cody, and a grandson, Elijah, Noam's son.

“I have known Bruce for about 15 years, said Alameda County Superior Court Judge Jo-Lynne Lee. “He is passionate about many things, including his wife, work, opera, good food, and wine. He is a good friend, by which I mean that he is someone you can go to for solid, well-considered advice (when you need it); someone you can depend upon to help you with small or large tasks (when asked); and someone just to relax with and have fun (all the time). He is engaged in and enjoys life to its fullest.”