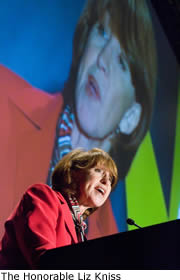 Joint Venture Board of Directors | Santa Clara County Board of Supervisors

Joint Venture co-chair Liz Kniss gets up every morning before the sun and heads over to the track at Paly High, or to the Dish in Palo Alto for a brisk walk. “Liz is my trainer,” says close friend and walking partner Ann Sonnenberg. “She will not let me walk less than four miles. When we’re supposed to reach the blue line on the track, we never stop short of it. Calling her goal oriented is like saying Lance Armstrong likes to ride a bicycle.”

Her indomitable pursuit of outcomes has led her to take on some of the Valley’s toughest issues—land use, health and family issues, transportation, technology in schools—in a career that has spanned public and private sectors, public health, the technology industry and elected office.

Beyond her goals orientation, her people skills have been a key element in her success. “I worked for Liz for three years when she was my research coordinator at Sun,” laughs Sun Fellow Ivan Sutherland. “She could get the cooperation of anybody in the company.”

She left Sun when she was elected Mayor of Palo Alto. As Sutherland points out, “Liz went from being a research coordinator at Sun to being the CEO of a $100 million operation. That’s a pretty good promotion.”

“Her ability to bring people together from multiple sectors and keep them working together toward a complex goal sets her apart,” says Gary Fazzino, Hewlett-Packard Vice President of Government and Public Affairs and a former colleague on the Palo Alto City Council. He cites as a classic example Palo Alto’s Family Resource Center, which opened in 1998 and links families to human service providers throughout the Peninsula. “Nobody but Liz could have built that bridge between the public and private sectors. She had to bring together the City, the County, community-based organizations and the business community. It's really made a difference, creating far more options and choices for thousands of families.”

In Palo Alto, she began to recognize the power of technology to connect people and government. In 1994, she brought in her contacts at Sun to make Palo Alto the first city in the country with its own web site.

When she returned to Sun, this time as Marketing and Communications Manager, Liz took on the statewide organization and management of NetDay96, a Joint Venture/Smart Valley effort that connected thousands of school kids to the Internet for the first time. “We had a tiny little budget – about $250,000,” Liz recalls, “but we got donations of millions of dollars of hardware, software and equipment, and coordinated tens of thousands of volunteers, who actually wired the schools.” Two of the volunteers were President Clinton and Vice President Gore, who helped to wire Ygnacio Valley High School in Concord. She still proudly wears her NetDay T-shirt with their autographs.

“Our economy is unique. We experience the highest of highs and the lowest of lows. In order to sustain the vibrancy and vitality we all want, it will be critical to have a group like Joint Venture identifying our emerging needs and acting on them.”

In 2000 she was elected Santa Clara County Supervisor from District 5, a position she holds today. “For me, being at the County is like going full circle. My training is as a public health nurse, which gives me a unique perspective as head of the Health and Hospital Committee, overseeing a third of the County’s $4 billion budget.”

Liz’s commitment to the transformative power of technology, collaborative processes, human services and an orientation toward results made her a natural fit for Joint Venture.

“I fell in love with Joint Venture when it was first born back in 1992,” Liz recalls. I went to the very first event and thought, ‘this is the perfect way to bring all these groups together.’”

Fazzino remembers that Liz was inspired by Joint Venture even then. “Palo Alto had never needed a long-term economic plan, but everything changed in the recession of 1991-93. Liz became a forceful advocate for the kind of planning process undertaken by Joint Venture, and led the development of our first strategic plan.

She followed the organization for years, but held off when CEO Russell Hancock approached her about joining the board four years ago. “Russ had such a passion and clear picture of where he wanted to take the organization, but I wanted to make sure that his actions matched his words,” she recalls. She watched for a year, saw that they did, and signed up.

She believes the organization has made tremendous steps forward. “You know you’ve been successful when you make a phone call and you get a call back,” she says with the wisdom of someone who dedicates her life to networking. “I see a huge difference now in the board and the people who are attracted to it.” She points to this year’s State of the Valley event featuring Al Gore as a large step forward, and to pathbreaking projects such as Wireless Silicon Valley and the Disaster Planning Initiative as critical to the future of the Valley.

Liz sees Joint Venture as an essential part of the Valley’s future. “Our economy is unique. We experience the highest of highs and the lowest of lows. In order to sustain the vibrancy and vitality we all want, it will be critical to have a group like Joint Venture identifying our emerging needs and acting on them.”

Despite her intense schedule and in addition to her commitments to Joint Venture, Liz finds time to be involved in many community organizations. She is a senior fellow of the American Leadership Forum, and has been of board member of the Senior Coordinating Council, League of Women Voters, the Rotary Club and the United Way.

When she needs to get away, she heads to Cape Cod where she grew up, and to her family’s summer home in the little town of Cotuit. Her time there revolves around her extended family, including her husband Rick, her two daughters and her grandchildren, and, of course, her morning walks. “Returning to the house provides a great consistency in my life,” she says fondly, “and recharges me for the very different pace of Silicon Valley.”