Director of Development, Cloud Engineering, at Skype and Joint Venture Board Member

It’s not really a stretch to say Dave Hodson pretty much spends all day with his head in the clouds. And considering how often he’s on a plane, that’s not entirely figurative.

A serial entrepreneur with multiple startups behind him, Hodson has made a career of innovative thinking, or what we in Silicon Valley call the productive phase of daydreaming.

Now, as the director of cloud portfolio engineering for Skype, a division of Microsoft, Hodson manages infrastructure teams that are moving Skype into mobile and cloud-based services.

At the same time, he recently joined the Joint Venture board of directors in hopes of engaging the venture capital world more in the organization’s collaborative public-private sector initiatives. 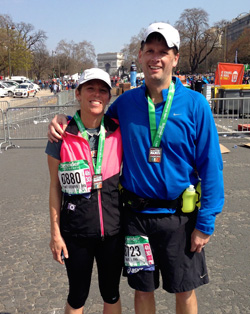 “Skype is the largest communications tool on the planet,” Hodson points out. “It’s reached what we call the 100-100 club: more than 100 million users each logging more than 100 minutes per month. We’re now over two billion minutes per day in voice calls.

“The thing I find so amazing is that Skype does not spend a lot of money on marketing, but we grow and grow each year. You can tell it’s big when people use the product name as a verb.”

Hodson was a principal development manager for Microsoft working on the Bing/Yahoo integration when it acquired Skype a year ago in an $8.5 billion deal.

“My expertise is in getting cloud-based services off the ground, so Microsoft asked me to lead the shift to mobile and cloud.”

The role takes him to Estonia, where Skype was born, and other European cities every few weeks to marshal international teams.

“I probably fly 100,000 miles a year, but I’m used to it,” says Hodson. “I’ve spent a lot of time in China and India in the past, but northern and eastern Europe aren’t as familiar.

“The challenge is to build a collaborative culture when everyone is different and they are nine, ten, eleven time zones away.

“It’s like a big puzzle, learning how they work. And they speak so many languages. Only 900,000 people in the world speak Estonian, but most of them speak English.

“What I like about Dave is that he's really good at making people accountable for the job they’re supposed to be doing,” said Eric Scheel, the operations director for cloud engineering at Skype and Hudson’s colleague for the past four years. “A lot of people don’t have that same level of integrity and forward thinking.

“Dave is technically super strong, a very sharp guy, really bright. He picks up on subtleties of things that aren’t working long before anyone else.”

“Dave is technically super strong, a very sharp guy, really bright. He picks up on subtleties of things that aren’t working long before anyone else.”

“Microsoft was always very community oriented, involved with charities and looking for ways to make an impact, and I’m like that, too,” he says. “I had heard about Joint Venture and wanted to see if I could get involved.”

When he looked into the organization and its work, he was surprised to find that one of his longtime Palo Alto neighbors was Joint Venture president and CEO Russell Hancock.

“I knew Russ as a neighbor since 1999 but I never really knew what he did,” Hodson says. “When we talked about it, I realized Joint Venture was a good fit for me. I was inspired by what they’re trying to do, bringing government agencies and companies together.

“I’m hoping to bring in some representation from the venture community to the conversation. That’s where I have experience and connections.”

After earning both his undergraduate degree in management information systems and his MBA at California State University, Chico in the early 1990s, Hodson spent three years as a programmer/analyst with Visa and two as a senior technologist with Deluxe Corporation.

In 1996 he co-founded iPrint Technologies, which earned many industry accolades and went public in 2000. In 2002 he founded MessageCast, technology that enables communication and RSS content syndication over real-time networks for instant messaging, SMS and email.

In 2005 Microsoft acquired the company and merged it into Windows Live, which Hodson managed for two years before moving into Microsoft’s Health Services Group to run engineering for another acquisition, Medstory.

Hodson also serves as an advisor at the Santa Clara University Center for Science, Technology and Society, working with the Global Social Benefit Incubator and the Frugal Innovation program.

"I realized Joint Venture was a good fit for me. I was inspired by what they’re trying to do, bringing government agencies and companies together."

What’s more, he is the lead mentor at StartX, Stanford University’s startup incubator, and serves on the Industry Advisory Board at Chico State’s Computer Science Department.

"Dave is smart, passionate and he doesn't play around when he's working on an idea," said Mike Rubin, a senior director with Healthline Networks who's known Hodson for eighteen years and was a partner with him on the startup team at iPrint and Message Cast. "He is a very strategic business developer who knows how to raise money and how to get things done. He builds relationships and, because of his technical prowess, people respect him for it."

With so many roles to fill, Hodson is keenly aware of being stretched too thin.

“I have two priorities,” he says with smile. “One is to stay married and the other is to make sure my kids know my name.”

Dave, his two older sisters and his younger brother were born in Cincinnati, where their dad, Gary, was a mechanical engineer with GE working on plane engines. 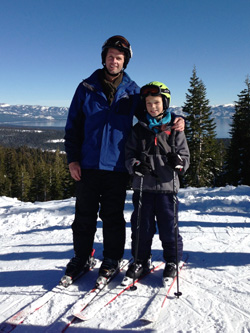 “I was a typical suburban kid,” says Dave. “We had no fences, dogs ran free, we went sledding in the snow, played outdoors, all that.

“Then one day my dad took a business trip to San Diego in the dead of winter. He got off the plane and no one was wearing a jacket. That was it; when he got back he asked for a transfer to California. We got here in 1975 when I was eight.”

Hodson grew up in Willow Glen and when he was in junior high school, his father bought an IBM PC. Dave was mesmerized.

“I just started writing code,” he says. “I was head over heels. I loved it. Computers were in my blood.”

After graduation from Archbishop Mitty High School, Hodson went to Chico and was in grad school when he met his future wife, Christine LeCuyer, a junior from Stockton.

The couple has two sons, Tyler, 11, and Brett, 8, who keep them busy with baseball, basketball, soccer and swimming. Together the family regularly attends Giants games and spends time at the beach, Yosemite and skiing.

Dave also runs twenty to thirty miles a week and has competed in eighteen marathons, turning in a best time of four hours and 21 minutes.

Running not only keeps Dave physically fit. All those hours on the road alone give him plenty of time to unwind and think.

Great activity for a guy with his head in the clouds.