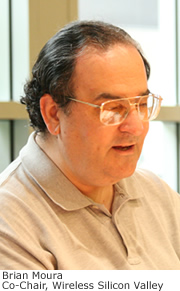 Mike Garvey, recently retired San Carlos City Manager, speaks volubly about Brian’s innovations and his impact on municipal government throughout the state. “We brought a cable company in to compete for our municipal business, and in the negotiations Brian came up with a business model he felt could allow for multiple competitors in the San Carlos market. The company told us Brian’s ideas were interesting, but San Carlos wasn’t a big enough market for their business. But they came back three weeks later and told us they’d changed their minds because every other city they approached said 'What’s Brian Moura going to do?'”

Garvey also recalls the time Brian was asked to judge a competition for the best municipal web site. “Can’t do it,” Brian responded. “I’m planning to enter the San Carlos site in the competition.” There was silence on the other end. San Carlos was the obvious first year winner.

“I remember little San Carlos being up there with Rochester and New York,” Garvey continues. “Brian had been told he had to develop the web site on his own time. To be up there with those big cities was just amazing.”

Brian has been recognized throughout the state for his accomplishments. Of three awards that are given to up and coming municipal executives—including the prestigious John Nail Award, given by the California League of Cities to the Outstanding Assistant City Manager in the state—Brian was the first person to win all three.

His original career path pointed him toward the law. But in law school he found himself increasingly intrigued by public sector finance, and took a series of internships that gave him experience in counties, cities and schools.

He realized that cities were the place he wanted to be, because they bring government closest to their constituents. “To me, cities are the most relevant level of government,” he says. They have a clarity not present in bigger bodies. In a city, you know everybody who is involved in decision making, and you understand the impact of what you are doing on people.”

His career was almost derailed before it started when he ran straight into Proposition 13. “I was one of the first victims of Prop 13,” he says about his days as an HR intern. “But the good news is it gave me a break to complete my masters at Cal State Hayward.

His time in school led him to his first municipal job, in the City of Hayward. In an assignment that has become typical of his experience, he was immediately put in charge of Hayward’s $40 million capital improvement budget. “It has often been true that my functional resume was different from my actual job responsibility,” he remarks, with characteristic understatement.

He was hired into San Carlos in 1986. The city was in the midst of a budget crunch, so he was assigned to three jobs at once – Assistant City Manager, HR Director and Finance Director. “At the time there was no IT Department, so I was responsible for that too.”

It is the opportunity to engage in every type of job that has kept him in San Carlos. When employees go on leave, he often adds an “acting” function to his responsibilities—he is currently completing a 14-month stint as Acting Economic Development Manager.

But accomplishments he points to with greatest pride are those involving intensive collaboration and creativity. One example is the financial scheme required to build a new library in San Carlos, for which he drafted and helped pass a voter initiative to provide $8 million in addition to $3 million he identified from the city budget.

Another example is San Carlos Elms, one of the first municipal senior assisted living facilities in the country. “It was during a downturn, and a local developer was holding some parcels across from City Hall that he couldn’t finance. I came up with a plan to use HUD money to turn it into senior housing, and we developed a complicated series of bond measures and borrowings to make it work.” The city even tucked away three years of operations reserves for the facility in case it remained vacant, but it was immediately popular and rented right away.”

Viewing cross-sector, multi-city collaboration as a path to change, Brian was immediately drawn to Joint Venture, at the time of its founding. “I was at the original organizing meetings, when Becky Morgan was our state legislator, and when we began to talk about how the public and private sectors could work together to enhance the economy and improve quality of life,” he recalls. In 1993, he led the effort to make San Carlos a charter member of Joint Venture.

“The organization made good choices about initiatives to launch, including especially smart permitting and school networking. He got San Carlos to develop a metropolitan network plan for schools, and when NetDay gained momentum, his schools were perfectly positioned to take advantage.

“This is the great thing about Joint Venture. We've got every city, working as a team trying to solve problems, right alongside the regulators...”

“One of our parents was a leader in the movement at Sun, and when they were looking for a school with plans, they were delighted to see what we had created. Arundel School in San Carlos was one of the first two schools to be networked. The city did the designs, the school district ran the conduit, and community members supplied the labor and donated equipment. By 3pm on NetDay, every school was online. Our IT staff even co-authored a guide to putting networks in schools that later became the statewide guide.”

Brian’s involvement in Joint Venture has been continuous ever since. He supported one of the Challenge 2000 education projects, helping to interconnect the San Carlos schools with those in Belmont and East Palo Alto. He was also instrumental in the Smart Voter project.

“Four of us drew up plans for Smart Voter on a whiteboard. We decided to put up a website and started calling candidates to get their information. I think we were single-handedly responsible for getting the candidates onto email,” he laughs. “We turned it over to the League of Women Voters, and there are now Smart Voter projects in eight states.”

Brian sat on the Executive Committee of Smart Permitting. “This was a great example of a public-private collaboration,” he remembers with enthusiasm. “Permitting software at the time was very primitive—DOS-based, not networked. Local companies really wanted this, so they donated servers and equipment. We developed a standard process which led you along a path to completion. Small companies worked with us to develop software that was so successful it put more established companies out of the business.”

“...when cities want to know where they should be heading...they’re going to talk to Brian Moura.”

He still has plenty of Joint Venture projects on his plate. Brian is co-chair of Silicon Valley Wireless, and is also immerse himself in renewable energy as a member of the Climate Protection Task Force. As he warms to the topic, you can feel the passion building. “This is the great thing about Joint Venture. We’ve got every city, working as a team trying to solve problems, right alongside the regulators—ABAG, and the Air Board. We’re getting the state to work with us, and we’ve got volunteers on the ground in San Carlos, encouraging people to go solar.”

This much is clear: when cities want to know where they should be heading in the areas of infrastructure, energy, environment, and economic development, they’re going to talk to Brian Moura.