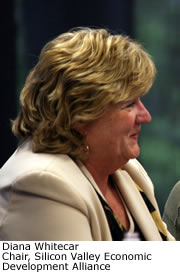 Her voicemail greeting is fairly standard, but the close (“…be sure and shop locally”) gives a telltale indication that when you speak to Diana Whitecar (pronounced wit’ ə kur) the conversation is going to turn to economic development, her professional passion.

For over 25 years, Diana’s focus has been rebuilding downtowns and reconnecting communities to their city core, using her personal alchemy of wit, wisdom, and straight talk to help turn obsolete neighborhoods into modern urban gold. Along the way she has led some of Silicon Valley’s most successful economic development projects, including the Castro Street revitalization in Mountain View, the San Jose McEnery Convention Center, and the Century Cinemas in downtown San Mateo.

“She’s a promoter, champion, cheerleader and raconteur,” says San Mateo City Manager Arne Croce, her former boss. “To achieve success in what she does she has to work with small business owners, private developers, chambers of commerce, large corporations, city employees, elected officials and concerned citizens. It takes somebody with a unique personality and an unusual set of skills to get all those groups behind her, and that’s Diana.”

“What is unusual about Diana is that her personality resonates with everybody,” says Tom Williams, Milpitas City Manager and her current boss. “There’s no hidden agenda – everything she does is about building collaboration and creating a team environment to accomplish project goals.”

“It takes somebody with a unique personality and an unusual set of skills to get all those groups behind her, and that’s Diana.”

When people start telling stories about her, they inevitably turn to her sense of humor. Over the years she has carried a boom box that played Petula Clark’s “Downtown” and required people to sing along, passed out popcorn at a contentious meeting on the Century Cinemas, dressed up for Halloween and baked chocolate chip cookies for opponents to a project, all in the service of collaboration.

“She’s a promoter, but it’s not self promotion,” says Leslie Parks, an economic development consultant who has worked with Diana in San Jose and San Mateo. “If somebody has a different idea about how to do things she listens, and if she thinks it’s a better idea, she’ll go with it. She is totally focused on results, and she doesn’t have to own an idea to make it work.”

Parks also describes Diana’s straightforward approach as a key source of success in winning over even the most adamant opponents of a project. “She doesn’t tell people what they want to hear. She tells the truth, and she can be blunt about it. In a project that takes years to develop, people come to respect her for it and it helps her to get support.

When asked how she got to Silicon Valley, Diana responds with typical dry wit: “I drove.” She grew up in Kentucky, where she earned her undergraduate degree and a Masters in Public Service from Western Kentucky University. She worked for cities in Kentucky and Michigan before motoring out to visit a friend in Silicon Valley. Within a few days, “I knew I belonged here. I loved the community. People were warm and considerate, and the business of Silicon Valley was everybody’s business.” She never left.

Her career has played out in project cycles. After a brief stint in banking, she went to work as Downtown Revitalization Coordinator for Mountain View, where she “got to be there in the beginning when everything was put in place.”

In 1986, she moved to the San Jose Redevelopment Agency, where she was responsible for the Convention Center project, which was already under construction. “It was the biggest public work that San Jose had ever undertaken, and it’s hard for many people to remember that there were real questions about whether we could ever fill it, and whether the City would be able to run it, or what supporting facilities needed to in place to make it go.” The project has become the cornerstone of San Jose’s downtown renaissance.

She later worked on the creation of neighborhood business districts in Alum Rock, East Santa Clara, Willow Glen, The Alameda and elsewhere, putting money into streetscapes and façade improvements. “It’s one of the joys of working in the public sector. I go down Santa Clara Street or The Alameda and see business thriving, and think, ‘I helped make this happen.’”

In 1995 she moved to San Mateo. “I wanted to get back to the full spectrum of city government. San Mateo had a full economic development program, had retail, and was looking to take the next step,” she recalls. As she quickly found out, the next step involved bringing a cinema complex downtown. There was strong political opposition from those who feared congestion and associated problems.

“I knew I belonged here. I loved the community. People were warm and considerate, and the business of Silicon Valley was everybody's business.”

She was skewered as “Jesse James” and a promoter of Arnold Schwarzenegger movies, but she “took it from soup to nuts,” putting together a market analysis, developing an RFP and an environmental impact report in addition to conducting public meetings.

It took her personal touch to make the project happen, and, as she says, “In the end, everyone who had been against it finally said, “This was a good thing.’”

In 2005 she moved to Milpitas for a new set of challenges. “Milpitas is much broader in terms of business focus because there’s not a downtown center,” she says. She is currently working on a project involving bringing a hospital and hotel to the city.

With her focus on economic development, Diana gravitated to Joint Venture. “I attended meetings of the Silicon Valley Economic Development Alliance (SVEDA) back in the 90s when Becky Morgan and Connie Martinez were involved,” she recalls. “I had a tremendous interest in the evolution of El Camino Real and the potential for a Valley-wide approach to changing its image and use. We came up with the concept of ‘Mainstreet USA’ and got funding from the Irvine Foundation to begin developing it. Today that project has become Grand Boulevard, which is tremendously exciting.

When asked how she got to Silicon Valley, Diana responds with typical dry wit: “I drove.”

She reserves particular pride for SVEDA, a regional partnership of economic development professionals from throughout Silicon Valley for which she serves as chair. “Joint Venture projects often take time to come together, and, like most of them, SVEDA had its early ups and downs. A lot of economic development is marketing, plain and simple. When Russ Hancock first came in, we really wanted to do regional marketing, and were disappointed that it just wasn’t getting done to our satisfaction. But he invested quality time to build the organization, and now we’ve got a great partnership of cities.”

Diana points to several SVEDA projects that she feels are particularly successful:

Diana brings the same skills and enthusiasm to her life outside work. In addition to being an active Rotarian and a member of many professional organizations, she brings her personal enthusiasm and wit to her personal partnership with Tibor Horvath and motherhood, as well as to her friends, for whom she has officiated a marriage and served as emcee for a 50th birthday in Las Vegas, the details of which will stay there.

Over time, Diana’s personal and professional philosophies have merged into a single dictum. “It’s all about commitment and community.”