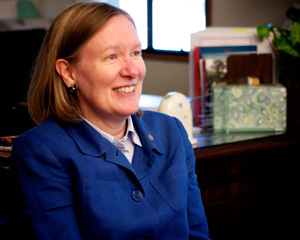 It says something about Notre Dame de Namur University President Judith Maxwell Greig that she would conclude a wide-ranging interview about herself without once mentioning her undying passion for the Chicago Bears.

Her husband, Cam, outed her afterward. “She didn’t tell you that? Her dad once sat on the Bears bench while he was in med school. She’s a rabid fan. She knows every player and all the stats. She can talk football.”

What this says about Greig is that she can be self-effacing when it comes to her personal interests over her professional ones. That, or maybe she doesn’t think much of the Bears’ chances this year under new head coach Marc Trestman.

The stats that she is far more bullish on, however, are those showing the progress Notre Dame de Namur has made opening the doors to higher education in San Mateo County not only for women but also for Hispanics and other first generation college students.

“Our strategic plan has three main themes,” says Greig, who became president of the state’s fifth oldest college in February 2009 after a year as acting president. “Access, excellence and engagement."

"The primary mission of the Sisters of Notre Dame de Namur when they were founded in Belgium 1804 was to provide young women with access to education,” says Greig. They founded the college in 1851 in San Jose and it moved to the current 50-acre Belmont campus in 1923.

Greig, who has also been a Joint Venture board member since 2009, is currently operating in a temporary office while the landmark Ralston Hall, an Italian villa-style mansion built in the 1860s by Bank of California founder William Chapman Ralston, undergoes a $12-15 million seismic retrofit.

Today, seventy percent of the 2000 undergraduate and graduate students at the private, Catholic, co-educational institution are women. “But now we also see that the Latino population needs to be better served.” 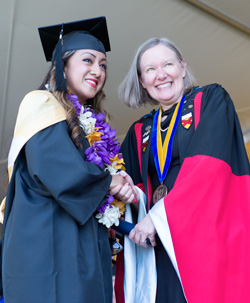 Nearly four of every ten primary and secondary school students in the county today are Hispanic, she points out, as are thirty percent of the students at NDNU. It is one of only two non-profit higher education institutions in Northern California designated as a “Hispanic Serving Institution” by the federal government.

What’s more, nearly sixty percent of the students in NDNU’s Class of 2015 are the first in their family to attend college.

“These groups are poorly served in higher education, and first generation students require different kinds of support,” Greig points out, citing such areas as financial aid, understanding the relevance of college and in other challenges. “So we’re making strides in access.” 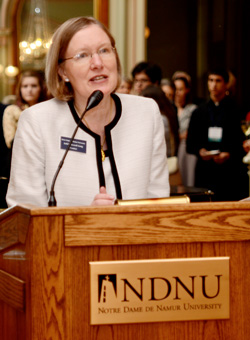 Greig is also promoting excellence in key areas, both for individuals and the university, by focusing on four main strengths: teacher education, business, psychology and natural sciences. The university offers 21 undergraduate, 13 graduate, and 5 credential programs.

“We can’t be all things to all people, so we are concentrating on what we do best,” she says. More than 3000 NDNU alums are San Mateo County teachers, principals and superintendents.

In the business curricula, NDNU now offers a master’s in public administration. For the first time, it will have a doctoral program in art therapy this fall. Enrollment in natural sciences has doubled in recent years, says Greig, driven by the growth in biotech.

The third focus area, engagement, is a source of pride for Greig. “We work hard to make our community a better place,” she says.

NDNU students perform 100,000 hours of community service each year, in keeping with the mission of the founding sisters. The school has made the President’s Higher Education Community Service Honor Roll in each of the past three years.

“Judi is a deep thinker with a keen intellect who sees the challenges and the opportunities in managing the higher education environment,” said Anne Hannigan, who chairs the university’s board of trustees. “She has a long history with the institution as a faculty member, dean, provost and president, so she knows it inside and out.

“Judi is a deep thinker with a keen intellect who sees the challenges and the opportunities in managing the higher education environment.”

“She’s a big thinker but attentive to the details at the same time. She inherited a troubled institution in terms of enrollment, financial problems and other issues. By every measure things have improved.”

Community engagement was also the impetus for Greig to join the Joint Venture board of directors after meeting CEO Russell Hancock at a musical event on campus.

“After he explained Joint Venture to me, I thought, this type of regional thinking sounds fabulous, especially with all these school districts we have here,” Greig says. “It’s absolutely the way to go. The Bay Area is so interconnected that there’s a lot of energy in working together."

“We have to support higher education in our county and remember not to blame the K-12 system. It’s valuable to have Notre Dame de Namur at the table for the diversity of thought.”

“After he explained Joint Venture to me, I thought, this type of regional thinking sounds fabulous, especially with all these school districts we have here,”

Born in Philadelphia, Greig and her two younger sisters were raised in Colorado Springs, where their father, James Maxwell, was assigned to the Air Force Academy after finishing medical school at the University of Pennsylvania. Their mom, Elaine, was a teacher until she chose to stay home with the girls, but still earned money typing doctoral dissertations for others. “With six carbon copies!” laughs Greig.

“I love it here, but Colorado is still a home to me,” she says. “The Rockies are so gorgeous – the blue sky, the crisp air, the snow, the thunderheads in the late afternoon. Such natural beauty!”

Greig earned her undergraduate degree in elementary education from Wheaton College in suburban Chicago, where she fell in love not only with the Bears but also with her future husband, Cameron Greig, a native of Cameroon in West Africa, where his parents were missionaries.

Cam had other family in Saratoga, so the couple moved to Silicon Valley in 1977. Cam went to work as a biologist for Syntex (which became Roche) and remained there until he retired recently after a battle with acute myeloid leukemia that’s now in remission.

Judi taught math and reading in elementary and middle schools while earning her master’s degree in reading education as well as her Ph.D. in the philosophy of education at Stanford University.

“Judi never ceases to amaze me in her ability to accept and work with the hugest spectrum of individuals,” says Cam. “She has so much more depth and firmness to her than I imagined, especially as an advocate for higher education.”

The couple has two sons, Nathan and Christopher, who both attended Los Altos High School but have taken diametrically different paths since.

Nathan, 24, is currently earning his master’s degree in geographical information science at San Francisco State University while living at home. “It’s so much fun having him home,” says Judi.

Christopher, 21, is a sergeant in the Marine Corps, stationed on Okinawa. “This is what he wanted to do, but his seven months in Afghanistan in 2011 were the longest of my life,” says his mother. “He served in the most decorated unit over there but thankfully he wasn’t hurt. We didn’t realize it at first, but the only time he was able to call us was when they were pulled in from the field for funerals.

“He spent his vacation last year in Washington, D.C. visiting wounded comrades and their parents, and the graves of his comrades at Arlington National Cemetery.”

Whether he chooses to make the Corps a career is still to be decided, says Greig, but she expects he will pursue an officer’s commission.

For the time being, Greig continues to carry out her strategic plan at NDNU and hopes for a speedy completion of the Ralston Hall project that has exacerbated an already overcrowded campus.

Meanwhile, the other big question that must be on her mind is whether Bears first year coach Trestman can do for quarterback Jay Cutler what he did for Steve Young on the 49ers in 1995.

But you have to ask her.