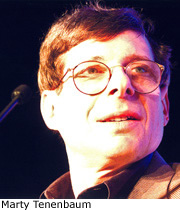 An interview with Marty Tenenbaum, CEO of CommerceNet and Smart Valley board member, is a roller coaster ride of ideas and interjections, climbing through apparently unrelated concepts, darting around the hairpin curves of unfamiliar ideas, and then suddenly synthesizing them into startling, unexpected conclusions. All the while, both Marty and his interviewer are rapidly jotting down notes, trying to keep the conversation moving quickly enough to keep pace with Marty’s ideas.

While Marty’s style may be reminiscent of Dr. Emmett Brown in Back to the Future (and Marty’s many admirers take loving pleasure in describing his eccentricities), his relentless pursuit of the synthesis of a wide range of ideas into revolutionary change has, over the course of his career, placed him at the forefront of such diverse movements as artificial intelligence, oil exploration and Internet e-commerce. He has now turned his entrepreneurial attention to healthcare, and hopes to catalyze change in this most difficult arena of misaligned incentives.

Eric Benhamou, Smart Valley chair and Smart Health co-chair, says, “Marty is a lightning rod for people and ideas. He has spent his career trying to push cutting edge innovation into new territories.”

“Marty told me, ‘On any given day I’m going to throw a hundred brilliant ideas over the wall. Your job is to tell me which two or three are actually worth pursuing.’”

Randy Whiting, who worked for Marty as CEO of CommerceNet a decade ago, remembers his initial interview with Marty. “Marty told me, ‘On any given day I’m going to throw a hundred brilliant ideas over the wall. Your job is to tell me which two or three are actually worth pursuing.’”

“His brilliance comes from connecting the dots,” Whiting continues. “He is the ultimate non-linear thinker. For Marty, it’s all about synthesis and relationship. He understands that synergy is possible when everyone else sees no relationship. He sees the vision so clearly, and is most effective when he is able to recruit partners to help him get there.”

Educated as an undergrad at MIT, Marty went to work for Lockheed, where he was awarded one of two doctoral fellowships given in the entire company to study at Stanford. While at Stanford, and then at Lockheed and SRI after earning his doctorate, he pursued his interest in visionary science by working on artificial intelligence. He was a founder, charter fellow, board member and standing chair of the conference committee of the Association for the Advancement of Artificial Intelligence during the peak of interest in AI, at a time when attendance at the organization’s annual conference grew from 200 to 8500.

In the 1980s, as the height of the AI wave subsided, he went to work for Schlumberger (pronounced Shlum-ber-zjay), an oilfield services company that leveraged its relationships with multiple oil companies drilling in a given region to construct physical models of an entire reservoir, which in turn enabled it to better advise each client. The notion of building a community to create value that would lift everyone became a central concept in Marty’s understanding of the power of collaboration to accelerate change. This concept would become central to the work he would do later in e-commerce and health.

In 1988, as Schlumberger was moving its computer science operations to Houston, Marty had what he describes as “an epiphany” that derived from his experience at Schlumberger in using the Internet to allow everyone involved in a project to provide services to each other.

It was Marty’s pursuit of Internet-based commerce that was at the center of one of the great success stories in Joint Venture history.

Opportunity presented itself in the early years of the Clinton administration when the federal government, responding to a recession in the post-Cold War economy, made available competitive Technology Reinvestment Program (TRP) grants designed to generate jobs in the technology sector. Driven by Smart Valley board chair John Young and Joint Venture CEO Becky Morgan, the Silicon Valley application received broad support from industry leaders and elected officials (including then-Governor Pete Wilson). As a result, Joint Venture received one of a small number of TRP awards, a $2.5 million matching grant, the focus of which was to accelerate the development and adoption of e-commerce.

“We could not have achieved what we did here without Joint Venture. E-commerce is one of the lasting legacies of that organization.”

The grant led in 1994 to the founding of CommerceNet, an organization with a mission of promoting e-commerce among companies across Silicon Valley. With the help of Vice President Gore and Commerce Secretary Ron Brown, who addressed CommerceNet’s grand opening, the $2.5 million in matching funds was quickly raised from membership fees. “Everyone showed up. We had many small companies working in this space,” Marty recalls. “They needed a way to process transactions, so we got VISA and Mastercard, and to ship orders, so we involved FedEx and UPS. We also taught large Silicon Valley companies like HP, Sun and IBM how to do business on the Net.”

CommerceNet’s success in bringing together this community of companies played a critical role in the formation oand growth of many pioneering Internet companies, including Internet industry giants such as Netscape (whose co-founder Marc Andriessen worked at EIT) and Verisign, paving the way for Silicon Valley’s boom in the late 1990s and providing an incredible return on the federal government investment.

In 1997, CommerceNet received another $2.5 million from the federal government, this time to develop collaborative business models for business-to-business commerce. Out of that project came Veo Systems, which Marty co-founded, and which pioneered the use of XML for automating B2B transactions. CommerceNet and Veo were key catalysts of the B2B wave.

Veo was later acquired by Commerce One. Marty went to work there as Chief Scientist, and helped the company become a major player in advancing the market for B2B communities.

“Internet commerce is at the core of economic growth, and will be for the next generation,” Marty says. “We could not have achieved what we did here without Joint Venture. E-commerce is one of the lasting legacies of that organization.”

Marty left Commerce One to co-found Webify, which used networks of business services, not unlike the netowrks of engineering services at Schlumberger, to automate complex processes in insurance and healthcare, such as real time eligibility, claims submission and adjudication. Webify achieved early success and was acquired by IBM last year.

Marty’s interest in healthcare led him to conceive of Smart Health, and he became an early advocate for the value of shared patient data across a community based on open standards. He has remained an active advisor to the project.

Today Marty is bringing the lessons learned in his career to accelerate therapy development through collaborative e-science. He is in the process of founding a company to develop a collaborative network of research communities, each focused on curing a particular disease, which will pool their resources to achieve unprecedented economies of scale and cross learning.

“The goal of Joint Venture and Smart Valley is always the same. Let’s solve the problem ourselves in Silicon Valley, and make it available to the world.”

“There are as many as 10,000 rare diseases out there that nobody is working on,” he says, warming to the opportunity. “We need an Apollo Project that will enable researchers to work together to cure them.” The new company builds on business models Marty learned at Schlumberger and Commerce One. “We will use the Net to give academic researchers access to data, knowledge, processes and resources, from high throughput genomics and drug screening to specimen libraries and patients) that they cannot reach now.” The company intends to utilize this “Open Biology” model to create a “Health Commons” that will facilitate collaboration across diseases, disciplines, and organizations, slashing the time, cost and risk of therapy development, so that cures for rare “long tail” diseases become economically feasible.

As Marty reflects on Smart Valley, he is pleased with the issues the organization is currently tackling. When asked what the next generation of ideas might be, he defines possible solutions to problems of traffic, housing and energy. “We should look at applying entirely new methods to manufacturing to drive down the cost of housing,” he says, scribbling down notes on the pad in front of him. And in tranportation, we’ve got to deal with the last mile problem – getting people from main transportation arteries to their final destination.”

“The goal of Joint Venture and Smart Valley is always the same. Let’s solve the problem ourselves in Silicon Valley, and make it available to the world.”

As Marty continues his quest to solve some of the world’s most difficult problems, family, exercise and music keep him connected to the “real world.” He has been married for 41 years to his wife Bonnie, who he met on a blind date in Seattle. He followed her to the Bay Area, went to work for Lockheed, and stayed. The lure of their five-year-old granddaughter now takes them to Cambridge one week a month.

Other activities allow him to stem and freshen the constant flow of ideas. He runs nearly every day, as he has for the last 40 years. In the last five years he has taken up jazz piano. “I can only play after 2am. I have to get mellowed out from the day’s activities. Jazz loosens my brain waves – playing is the closest I can get to a meditative state.”

His mind thus refreshed, he moves into a full slate of meetings each day, communicating with revolutionary fervor, pulling together seemingly unrelated points of view, devising the tasks necessary to achieve results, and relentlessly applying the lessons learned in a lifetime to make Silicon Valley (and the world) a better place.