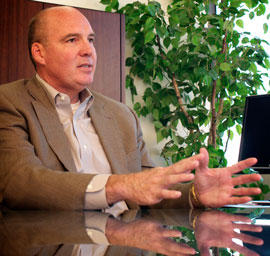 PG&E’s customer service upgrade in the past couple of years, it turns out, includes a bricks-and-mortar makeover in Silicon Valley.

“We stripped everything down to the dry wall and concrete floors and started from scratch,” Hall said, standing in the doorway of a bare corner office with a large window overlooking Almaden Boulevard.

“We are also upgrading with high efficiency equipment, elevators, chillers, lighting, and making a number of other improvements to make this a 21st century building,” he added, noting that the 2-year project at 111 Almaden Boulevard is just a few months away from completion. 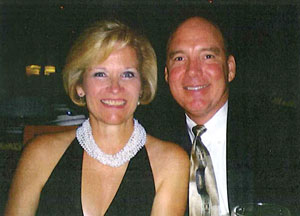 When the Almaden building first went up in the early 1970s, says Hall, it was the tallest in San Jose. Now it’s dwarfed by The 88, a 22-story condo tower on East San Fernando, and by the 18-floor City Hall and some two dozen other taller structures.

“This project is all part of our desire to find better ways to work together with our customers, to make decisions locally and to have a stronger presence in the community,” says Hall.

The 111 Almaden renovation isn’t the only Silicon Valley project filling Hall’s time. In addition to his regular duties with PG&E, he is an important liaison to Joint Venture’s Smart Energy Enterprise Development Zone initiative (SEEDZ).

"He is a strategic thinker who listens well, and seeks to understand and articulate issues from the perspective of all stakeholders, including customers, local jurisdictions, and the utility."

“He is a strategic thinker who listens well, and seeks to understand and articulate issues from the perspective of all stakeholders, including customers, local jurisdictions, and the utility. He’s also good at bringing the right PG&E resources to the table to help get things done.”

“PG&E has activity in every piece of SEEDZ,” he says. “Energy efficiency, demand response, electric vehicles, renewable distributed generation and storage – they’re all part of our strategy to provide safe, reliable, and affordable energy.”

“The challenge is bringing different participants together to find solutions that match the needs of the community and the customer. That’s where Joint Venture’s value is.”

Hall added that it’s important for PG&E to keep up with the technological growth of companies like Juniper Networks, Google, NetApp, Lockheed Martin and others in the zone.

“SEEDZ is unique, like Silicon Valley, in that there’s a synergy of talent, innovation and market leading companies,” Hall says. “The challenge is bringing different participants together to find solutions that match the needs of the community and the customer. That’s where Joint Venture’s value is.”

With PG&E for the past 31 years in a variety of roles, Hall now leads local teams throughout the Bay Area and Central Coast, responsible for managing customer relationships, developing community presence and implementing a portfolio of sustainability programs.

Hall and his two older brothers, Rich and John, were born in Minneapolis to Richard and Janet Hall. Their father was a ball bearing salesman who later transferred to Chicago, Kansas City and ultimately to Pleasanton.

Hall went to Amador High School in Pleasanton and then on to the University of California at Davis, where he earned his bachelor’s degree in managerial economics in 1981.

Hall followed his brother, Rich, to PG&E right out of Davis, taking a job as a residential conservation services specialist, starting in the Stockton training center.

“PG&E had jobs to fill, my economics training fit right in and my brother was there, so it was an easy decision,” Hall says. 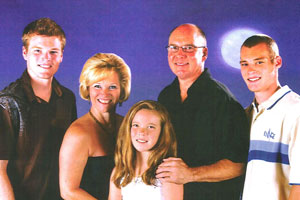 From then until now, Hall has held a dozen different positions with PG&E, both in the field and in the office, including business analyst, meter reading supervisor, call center lead supervisor, energy services supervisor, senior account manager and corporate accounts manager.

In addition to his SEEDZ work, Hall is also active on the energy committee of the Silicon Valley Leadership Group, and is a graduate of Leadership Morgan Hill.

“PG&E is so large, but Don is always able to see the other side of the table when others need his support,” said Jon Ball, executive vice president for Hensel Phelps Construction and Hall’s longtime personal friend. “He’s never been one to push back and say that’s your problem. He represents PG&E extremely, and I mean in all caps, EXTREMELY well. 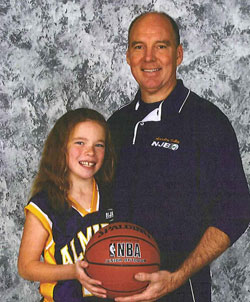 “I’ve known Don for 20 years,” Ball added. “We played basketball on the same team in Morgan Hill. He’s a good athlete and fun to play with. Don is also a loving husband and father. I respect him as a family man.”

Hall met his future wife, Sharon Sandrock, in 1984 when she was working for a PG&E colleague of his. She became an engineer for HP and Agilent and is now with Avago.

The couple lives in Almaden Valley and has three children, Ryan, 23, a recent graduate from the University of Arizona, Brennan, 20, a junior at Loyola Marymount University, and Meghan, a freshman at Archbishop Mitty High School.

He works hard to inspire his teams, both at work and on the basketball court, he says, “to go beyond what we are asked to do” and make every day interesting.

“You choose your attitude each and every day,” says Hall. “If you choose to make the best of it, success grows around you.”