The Lexicon of Silicon Valley: Words that Shape the Narrative

December 17, 2019 - The Silicon Valley Institute for Regional Studies has partnered with Discourse Data, a narrative analysis platform, to examine 2019 trends in national online discussions that reference the influential technology region. If Silicon Valley, more than a tech capital, is a mindset or a state of mind with global influence, what are the associated key words and conversations people mention when conversing about the region? 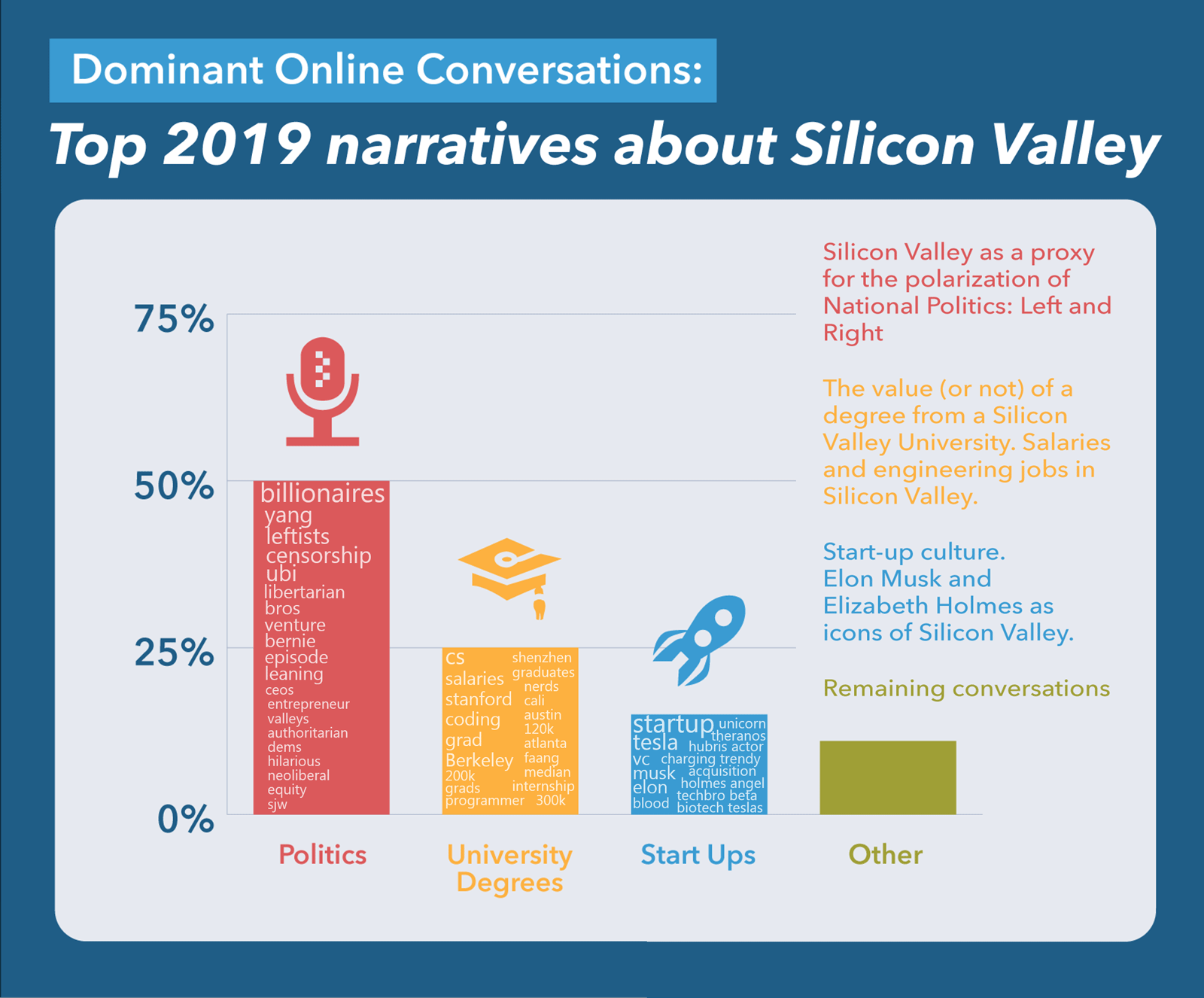 “We spend a lot of time at the Institute examining data and trends within the region,” said Rachel Massaro, the Institute’s Director of Research, “As a departure, it’s interesting to look at Silicon Valley from the distant and unique vantage point that this data provides. Looking back at 2019, what were people thinking when they thought of ‘Silicon Valley’?”

With analytic tools that reveal potential insights, Bay Area-based Discourse Data distills conversations down to words using Natural Language Processing and statistical analytic tools. An analysis of 600 million Reddit conversations in the first half of 2019 showed that the term, Silicon Valley, was mentioned in 7,811 conversations by 6,669 individuals, at a rate of one in every 77,000 comments.

The most dominant narratives associated with the term Silicon Valley in 2019, in order of prominence:

Further scrutiny may even reveal the underlying values and biases of the discussion participants. The most frequently used words in conversations associated with Silicon Valley included: billionaires, Yang [Andrew, who is not local to Silicon Valley], “leftists,” censorship, UBI (universal basic income), CS (computer science), startup, and Tesla. Words like FAANG (a popular acronym for Facebook, Apple, Amazon, Netflix, and Google) were used often, along with “techbro,” Austin, unicorn, and acquisition.

The Silicon Valley Institute for Regional Studies and Discourse Data hope to partner with one or more Silicon Valley cities to apply this type of analysis more specifically to local data.

Note: Narrative Analysis is from Discourse Data using 2019 posts on Reddit (January - June). The top three dominant conversations are shown with each word's frequency of use within that conversation shown. The sample size included 6,669 Reddit authors. Published Reddit demographics suggest that approximates 58% of Reddit users are from within the United States. Posts in languages other than English were not included in the analysis. Discourse Data uses large data sets from online conversations to detect the underlying beliefs and values which drive the narratives around any topic of conversation.