November 13, 2020 – Silicon Valley’s eligible voter turnout for the November 3 General Election, based on results reported to-date, was at unprecedented levels. Preliminary numbers suggest an eligible voter turnout of 71 percent, compared to 62 percent in the 2016 General Election. “We haven’t seen a turnout like this in at least 50 years, if ever,” said Joint Venture’s Institute for Regional Studies Director of Research, Rachel Massaro. “The 2016 and 2008 Presidential General Elections both saw turnout at around 62 percent. But other than those, our region has never seen a number above 60 percent.” *References to Silicon Valley include Santa Clara and San Mateo Counties combined.*

Preliminary absentee voting rates are also higher than ever before, due in large part to the pandemic. In San Mateo County, 92 percent of ballots cast were either sent by mail, dropped off in a ballot box, or hand-delivered to a polling location. This compares to a rate of 72 percent in the 2016 Presidential General Election, and has been exceeded only once (in the 2018 Statewide Direct Primary Election for which around 160,000 county residents voted absentee – less than half of the more than 334,000 counted in this election thus far). In San Francisco, the preliminary absentee voting rate stands at 91 percent. The Santa Clara County unofficial election results posted yesterday do not include a vote-by-mail total; however, based on early voting totals alone, the absentee voting rate will definitely exceed 79 percent (and will likely be much higher). 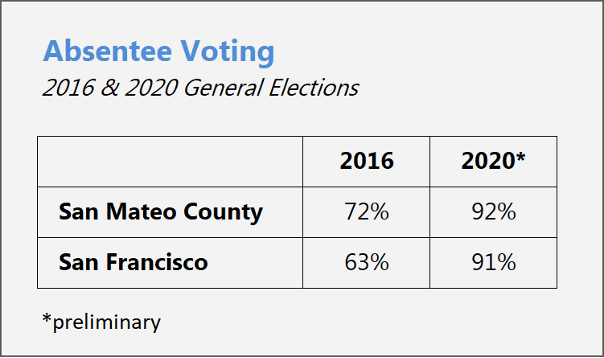 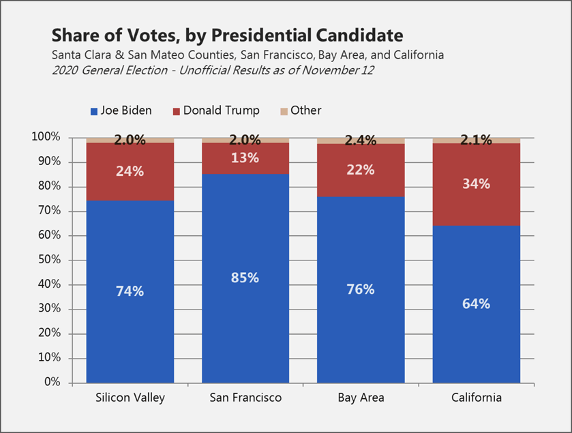 Nearly all of the ballots have been counted as of this posting. According to the latest data posted by Santa Clara and San Mateo Counties, as well as the California Secretary of State, nearly all ballots have been counted. As of “unofficial results” updated November 12, Santa Clara County stands at 95 percent counted (leaving approximately 44,000 left to go), San Mateo County reported 10,000 left (placing it at essentially 100 percent counted), and statewide approximately 1.05 million ballots remain outstanding. As a result, ballot counts across California’s 58 counties is at an average of 95 percent complete. *San Mateo County is set to update results today at 4:30 pm; Santa Clara County has a planned update today at 5:00 pm.*