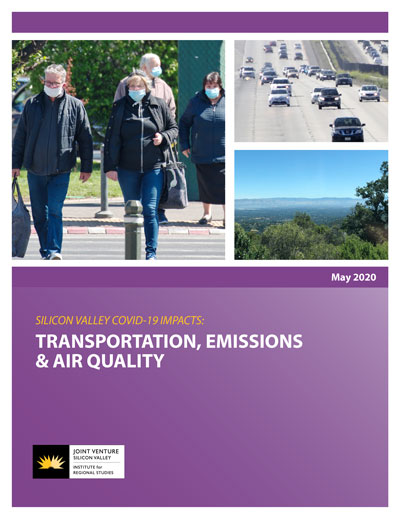 June 2, 2020 – Joint Venture Silicon Valley’s Institute for Regional Studies today published a new report, COVID-19 Impacts in Silicon Valley: Transportation, Emissions & Air Quality, that reveals an upside to the Silicon Valley shelter-in-place orders implemented in March due to the COVID-19 pandemic. The report examines the reduction in Silicon Valley’s regional ground and air transportation, declines in traffic delays, as well as the impact of those reductions on transportation-related injury crashes, regional air quality, and greenhouse gas emissions. The Institute analysis presents these impacts in the context of historical trends, where possible.

“We certainly don’t intend to minimize the tragedy of the pandemic,” said Rachel Massaro, the Institute’s Director of Research. “And yet, there is an opportunity to delve into the merits of having fewer cars on the road. Understanding the impacts of reduced transportation on emissions and air quality can help shape our future behavior, and potentially inform policies around telecommuting.”

“Will the health crisis catalyze new approaches to transportation and a renewed emphasis on telecommuting?” queries Russell Hancock, President and CEO of Joint Venture, in the report’s Forward. “By quantifying the reductions and their associated impacts, we hope this study will inform the thinking on important questions such as these.”