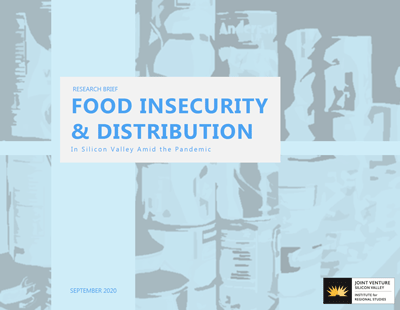 October 14, 2020 – Seven months into the pandemic, Silicon Valley residents who were already stretched with costs, faced significantly more challenges and an increased need for food assistance programs. At the same time, food costs rose by much as 19 percent for meat, poultry, and eggs, further exacerbating the issue. The Silicon Valley Institute for Regional Studies at Joint Venture Silicon Valley has released Food Insecurity & Distribution in Silicon Valley Amid the Pandemic, a research brief created in partnership with Second Harvest of Silicon Valley and Silicon Valley Food Recovery, an initiative of Joint Venture.

The brief is intended to provide a high-level understanding of how the region’s residents have fared during the pandemic, outlining the impact of the decline in employment on regional food needs, and the rapid response of emergency food distribution efforts.

"Food insecurity was an incredibly difficult thing to quantify during normal, pre-pandemic times,” says Institute director of research, Rachel Massaro. “With so much that's changed since March, what we can say for certain is that our food needs have risen dramatically and, by all accounts, our community has rallied to meet that need."

“The economic fallout of the pandemic is hitting low-wage, hourly workers especially hard, who were already struggling to afford their rent and pay for food in Silicon Valley,” said Leslie Bacho, CEO for Second Harvest of Silicon Valley. “Even when the economy is fully open again, the recovery for low-income households—many of which depleted their savings or delayed payments during the shutdown—is expected to be slow. When we consider these factors along with post-recession data, there are some strong indications that there will be a significant and permanent increase in the number of people needing food assistance.”

“Food insecurity is nothing new, even here in Silicon Valley,” said Russell Hancock, president & chief executive officer of Joint Venture Silicon Valley. “Because of our high costs, a growing share of our households are struggling to make ends meet even before the pandemic set in.”

“Food insecurity is nothing new, even here in Silicon Valley,” said Russell Hancock, president & chief executive officer of Joint Venture Silicon Valley. “Because of our high costs, a growing share of our households are struggling to make ends meet even before the pandemic set in.”

About Second Harvest of Silicon Valley

Founded in 1974, Second Harvest of Silicon Valley is one of the largest food banks in the nation and a trusted nonprofit leader in ending local hunger. The organization distributes nutritious groceries through a network of more than 300 partners at drive-thru and walk-up sites across Santa Clara and San Mateo counties. Due to the prohibitively expensive cost of living in Silicon Valley and the economic downturn caused by the COVID-19 pandemic, hunger is at an all-time high. Second Harvest is now serving 500,000 people on average every month, which is twice as many people as they reached pre-pandemic. Second Harvest also connects people to federal nutrition programs and other food resources, and advocates for anti-hunger policies on the local, state and national levels. To learn more about how Second Harvest is responding to the incredible amount of need in Silicon Valley, visit shfb.org.

Joint Venture’s food recovery programs bridge the gap between those who are hungry and the abundance of surplus food that is just out of reach for so many. Silicon Valley Food Recovery is actively engaged in solutions for the efficient delivery of nutritious prepared food directly to those who need it most. For more information, visit www.jointventure.org/initiatives/silicon-valley-food-recovery.