Data Release: Silicon Valley unemployment down slightly in May

May Unemployment Down Slightly; Remains Above Recession High

- Rates should be taken with caution -

June 19, 2020 - Joint Venture Silicon Valley’s Institute for Regional Studies today released an analysis of post-COVID unemployment rates compared to 20 years of pre-COVID historical data. The numbers reflect a minimal decrease of 0.6 percentage points in the regional unemployment rate from the unprecedented 11.6 percent in April – a rate surpassing even the post-dot com bust and recession highs of 2009.

Following today’s release of preliminary May 2020 labor market data from the U.S. Bureau of Labor Statistics (BLS) via the California Employment Development Department (EDD), Joint Venture’s Silicon Valley Institute for Regional Studies compiled a chart that illustrates a slight decline from the unprecedented April rates for Silicon Valley (including Santa Clara and San Mateo Counties), plus California and the United States.

Silicon Valley’s unemployment rate was 2.4 percent in February – only slightly above the 2019 low of 2.0 percent; it rose slightly to 3.1 percent in March reflecting the earliest effects of the pandemic, then soared to 11.6 percent in April. The preliminary estimates for May show a Silicon Valley unemployment rate of 11.0 percent; however, methodological caveats in data collection and classification were the likely cause of this shift, rather than a real increase in employment, and the rate is expected to be revised.

“…it sure looks like it will be a long flog for most people to get back to full-time employment.”
– Stephen Levy, economist

Between April and May, approximately 3,700 nonfarm jobs were added in Silicon Valley. “It’s good that people went back to work and the unemployment rate is lower, but very few of these were full-time jobs,” said Stephen Levy, Economic Advisor to the Institute and Senior Economist of the Center for Continuing Study of the California Economy (CCSCE). Regarding the May unemployment rate, he remarked, “I would take it with a grain of salt. We won’t really know for a couple of months until the data sorts out, and it sure looks like it will be a long flog for most people to get back to full-time employment.”

Aside from the part-time status of many workers, there are some major caveats to the recent U.S. Bureau of Labor Statistics (BLS) employment data releases on both the local and national levels. The national unemployment rate for May – which was released on Friday, June 5 – indicated a 13.3 percent unemployment rate and noted that the total number of nonfarm jobs throughout the U.S. had increased by 2.5 million that month. This increase was attributed to “a limited resumption of economic activity that had been curtailed due to the coronavirus pandemic and efforts to contain it.”

The Silicon Valley unemployment rate, like the national rate, was affected by changes in interview methodology due to the pandemic including remote data collection – which decreased the typical household survey response rate by approximately 15 percent according to the June 5 BLS news release. Other methodological caveats include:

As stated in today’s (June 19) BLS release, “the household survey estimates of employed and unemployed people that serve as the primary inputs to the state models were affected to varying degrees by the misclassification, which in turn affected the official LAUS [Local Area Unemployment Statistics] estimates for May 2020.”

“Like so many other pandemic-related economic trends we’re tracking, much of the real impacts won’t be fully understood for months to come,” according to Rachel Massaro, the Institute’s Director of Research. “The methodological caveats behind the unemployment figures are too significant to ignore; so, rather than focusing on granular variations in unemployment from month-to-month, we need to keep our eyes on the bigger trend at play – that an enormous and unprecedented share of our residents are out of work right now, and are struggling to get by.”

Statewide, the most impacted industries by the total number of payroll jobs lost in May were Government (down four percent month-over-month) and Information (down one percent). Among the 141,600 nonfarm jobs added in May statewide, the industries with the highest month-over-month percent growth were Construction (+10 percent) and Leisure and Hospitality (+six percent).

Unemployment Rates in May 2020 (preliminary):

Among the state’s 58 counties, Santa Clara County ranked the fifth lowest in terms of unemployment rate; San Mateo County, which lost the number one ranking in April and moved to number two (behind Marin County), moved down to seventh in May. The highest unemployment rate in the Bay Area was Napa County, at 14.4 percent; the highest in the state was Mono County, at 28.9 percent.

As was announced by the California EDD yesterday (June 18), statewide benefit payments across all unemployment programs since mid-March – including the $600 per week stimulus payments, Pandemic Unemployment Insurance, and Pandemic Emergency Unemployment Compensation paid by the federal government – have reached $30 billion. Among the state’s counties, the largest shares of benefit payments have gone to southern California, with nearly $1.2 billion to Los Angeles County alone in January through April. Excluding those southern California counties, Santa Clara and Alameda Counties received the most benefits through April, at $191 million and $177 million, respectively. 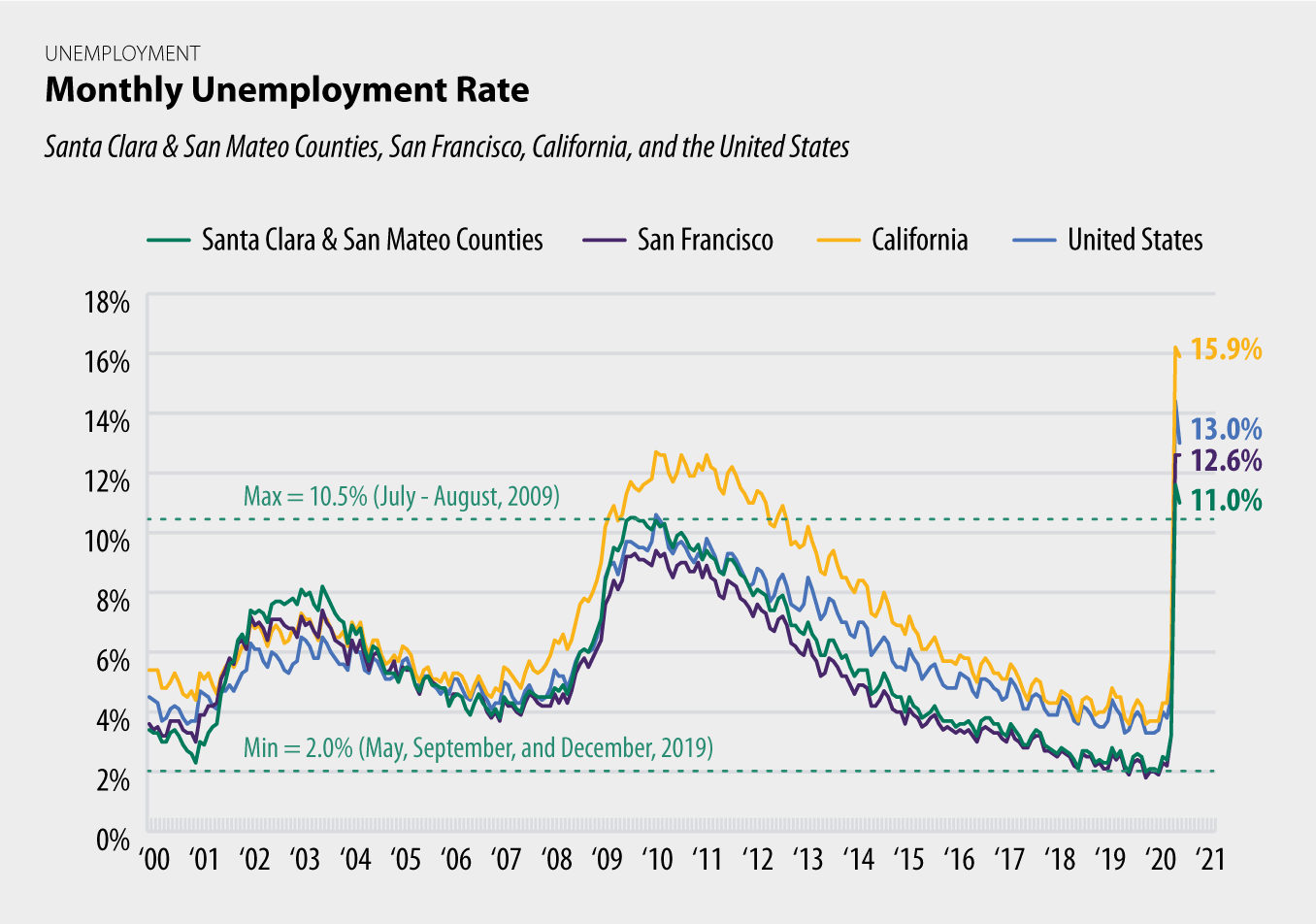 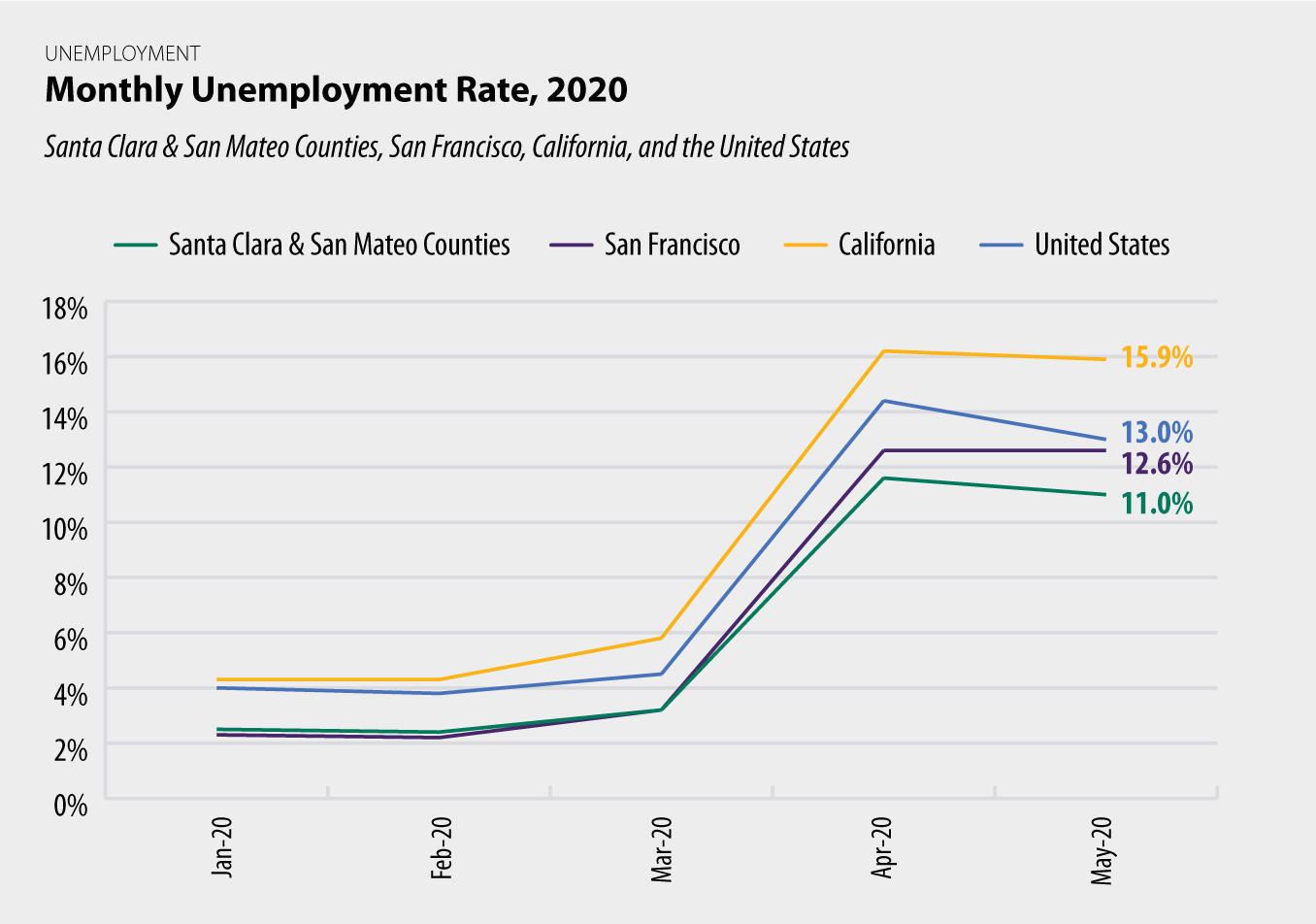 Monthly unemployment rates are calculated using employment and labor force data from the Bureau of Labor Statistics, Current Population Statistics (CPS) and the Local Area Unemployment Statistics (LAUS). Rates are not seasonally adjusted. County-level and California data for May 2020 are preliminary, and are from the California Employment Development Department June 19.